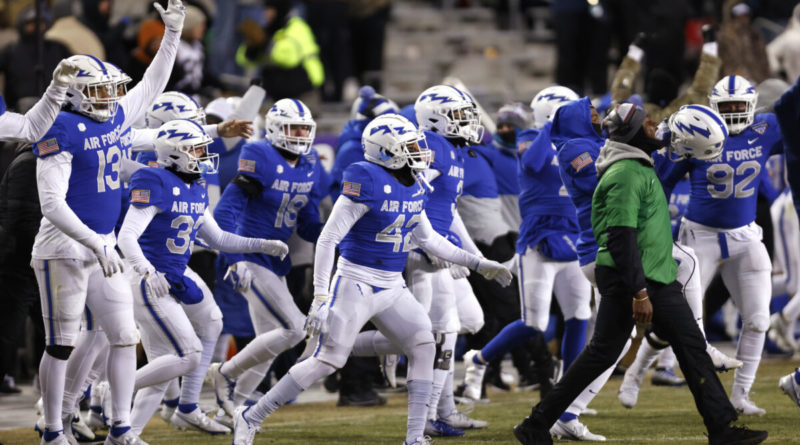 
Hazziq Daniels threw for one touchdown and rushed for another Thursday night, Dec. 22, as Air Force pulled away in the second half for a 30–15 win over Baylor at the Armed Forces Bowl in frigid Fort Worth, Texas.

The teams kicked off with 13-degree temperatures and a wind chill of 4 below zero. It missed being the coldest bowl game ever at kickoff by one degree. However, the arctic conditions didn’t hamper the Falcons (10–3) as they finished with a 379–230 edge in total yards against the Bears (6–7), controlling the ball for more than 40 minutes.

Leading 9–7 at halftime, the Falcons used a 20 mph wind at their back to generate two third-quarter touchdowns. Daniels found Amari Terry for a 68-yard completion to the 2, setting up Daniels’ scoring run on the next play just 2:32 into the period.

Daniels upped the advantage to 23–7 with 2:29 left in the quarter on a 15-yard touchdown pass to Caleb Rillos. Roberts tacked on the clinching score on a 1-yard run with 12:40 left in the game, the only points either team managed into the wind.

Baylor quarterback Blake Shapen struggled most of the night, hitting only 11 of 23 passes for 188 yards with two touchdowns. One score came on an 8-yard strike to Hal Presley with six seconds left in the first half and the other was a 14-yard connection to Gavin Holmes with 3:34 remaining in the game.

Air Force set an instant tone by producing points on its first two possessions. The Falcons melted nearly nine minutes of clock on their first drive with Roberts capping it on a 2-yard run at the 5:20 mark of the first quarter. Matthew Dapore hit a 37-yard field goal with 1:13 remaining in the opening period to make it 9–0.

17 Steady Income Streams You Can Create While in Retirement