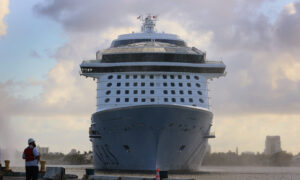 A federal appeals court decided late Friday to lift the COVID-19 related restrictions imposed by the Centers for Disease Control and Prevention (CDC) on cruise ships in Florida.

Florida had initially won in blocking the CDC’s cruise ship order in a district court in June, until the three-judge panel on 11th U.S. Circuit Court of Appeals earlier this month blocked that decision, ruling that the CDC’s COVID-19 restrictions must apply to Florida-based cruise ships.

But the Atlanta-based court late Friday reversed its decision in a two-page ruling, letting the lower court order stand and rejecting the federal government’s request, saying that it had “failed to demonstrate an entitlement to a stay pending appeal.”

The decision came hours after Florida filed an emergency petition with the Supreme Court seeking to lift the appellate court’s order. The filing said that the CDC had exceeded its authority in imposing the rules and that Florida is “irreparably harmed” by the initial order from the appellate court.

A spokeswoman for Florida Attorney General Ashley Moody said late Friday that the state is pleased that the appellate court has lifted “the prior order allowing the preliminary junction to be in place.”

The Epoch Times has reached out to the CDC for comment.

The CDC shut down all cruises starting in March 2020, the start of the pandemic caused by the CCP (Chinese Communist Party) virus. In late October 2020, the agency issued the Conditional Sail Order that imposes a series of conditions that cruise lines must meet before they may resume operations.

Per the order, cruise lines could resume commercial trips if they could meet certain conditions. Those that could ensure that 95 percent of passengers and nearly all crew were vaccinated could bypass what the CDC called “simulated voyages” in the effort to gradually resume operations.

The state of Florida sued the federal government in April over the CDC’s extended shutdown of cruises, and asked the judge to stop the CDC from imposing its conditions on cruises launching from Florida and other U.S. ports.

“We are not going to sit back while its administrative agency decides to shut down an entire industry,” Moody said at the time.

U.S. District Judge Steven Merryday in June ruled in Florida’s favor, before his order was overturned by the 11th U.S. Circuit Court of Appeals and ultimately reinstated.

Cruise Lines International Association, a trade group, did not indicate on Friday whether it supported Florida’s lawsuit, but said before the appeals court order that cruise ships will continue to operate in accordance with the CDC requirements.

Separately, Norwegian Cruise Line Holdings earlier this month sued Florida over the state’s law that prohibits vaccine passports, saying that the law was preventing it from “safely and soundly resuming passenger cruise operations” from Miami starting on Aug. 15.

Tom Ozimek and Reuters contributed to this report.

Nigerian Woman Who Converted to Christianity Will Be Killed If Deported From Canada, Says Religious Rights Advocate

Northern Ireland eases out of lockdown with indoor hospitality return