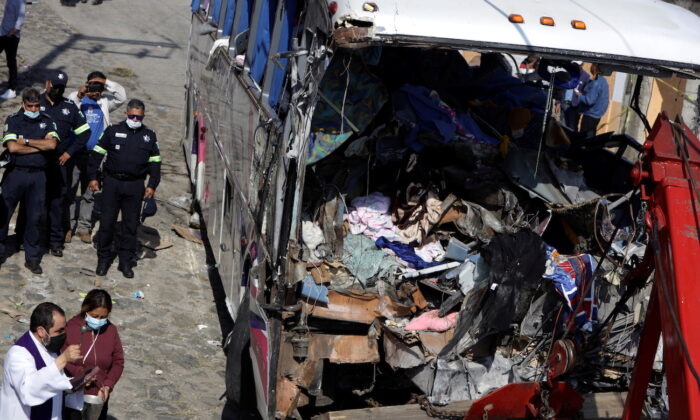 A priest blesses the bus at the scene where at least 19 people were killed and 20 more injured after a passenger bus traveling on a highway crashed into a house, according to authorities, in San Jose El Guarda, Mexico, Nov. 26, 2021.(Luis Cortes/Reuters)

MEXICO CITY—At least 19 people were killed and 20 more injured on Friday when a passenger bus traveling on a highway in central Mexico crashed into a house, authorities said.

The brakes on the bus, which was heading to a local religious shrine in the state of Mexico, failed, according to local media reports. State authorities did not disclose the possible causes of the accident.

Assistant state interior secretary Ricardo de la Cruz Musalem said that the injured had been transferred to hospitals, including some by air.

The state Red Cross said 10 ambulances had rushed to the area.