Australia will deploy Defence Force personnel and federal police to the Solomon Islands in the Pacific “to calm the situation” amid unrest that has seen businesses in the Chinatown district of the capital, Honiara, set on fire.

This comes after a planned protest in Honiara on Wednesday led to public disorder that saw the destruction of a leaf hut adjacent to the Parliament, a police station, and a high school.

Further unrest on Thursday, reported by witnesses who posted photos and video to social media, showed smoke billowing and destruction in the Chinatown district.

“We have received reports of more buildings burning on the main road in the centre of Honiara, including a large commercial building and a bank branch. And there is increasing number of people on the streets,” Morrison said.

The detachment of 23 AFP officers who left on Thursday will support riot control, while the 50 further officers will provide security support at critical infrastructure.

Their mission is expected to last for weeks, Morrison said, who advised the prime ministers of New Zealand, Fiji, and Papua New Guinea of Australia’s intentions.

“Our purpose here is to provide stability and security to enable the normal constitutional processes, within the Solomon Islands, to be able to deal with the various issues that have arisen,” he said.

“It is not the Australian government’s intention in any way to intervene in the internal affairs of the Solomon Islands, that is for them to resolve.”

Morrison noted that Australia’s security support did not extend to the Solomon Islands Parliament or the executive buildings of the government, which was the responsibility of the Royal Solomon Islands Police Force.

The primer minister stressed that Australia’s deployment did not indicate “any position on the internal affairs of the Solomon Islands.”

The protesters are reportedly mostly from the Solomon’s most populous region, Mailata Province, whose renegade leader, Premier Daniel Suidani, has vehemently protested the government’s decision in September 2019 to drop diplomatic ties with Taiwan in favour of mainland China.

Suidani has stood firm in his support for Taiwan, despite pressure from federal colleagues and Beijing.

Caden Pearson is a reporter based in Australia, with a background in screenwriting and documentary. Contact him at caden.pearson@epochtimes.com.au 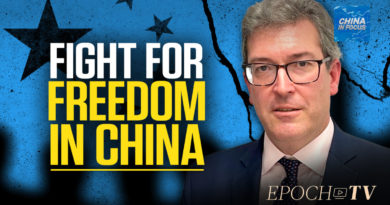 ‘A Responsibility to Use Our Freedoms on Behalf of Those Who Are Denied Them’: Benedict Rogers