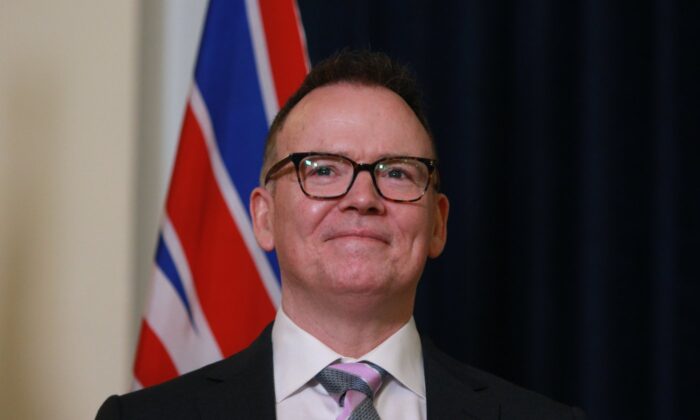 Opposition B.C. Liberal Party Leader Kevin Falcon is sworn in during an oath ceremony and introduction to the house in the Hall of Honour at legislature in Victoria, May 16, 2022. (The Canadian Press/Chad Hipolito)

British Columbia’s Liberal party says its delegates have voted to begin a process to potentially change the party name.

This comes as about 800 members gathered at a convention in Penticton this weekend to welcome new leader Kevin Falcon and map strategy ahead of the scheduled fall 2024 provincial election.

Falcon, who won the leadership race earlier this year, says in a release that the party’s name “must be one that reflects a diverse and inclusive big-tent coalition.”

He says every member will have the chance to vote on a new proposed name or to keep the current one by the end of the year.

The party says it plans to appoint an executive to form a name change committee.

The B.C. Liberals are not affiliated with the federal Liberal party and have described themselves as a “made-in-B.C. free enterprise coalition.”

Technology Plays God in the Effort to Erase Sexual Identity

Husband of missing Calif. mom arrested in connection with her disappearance