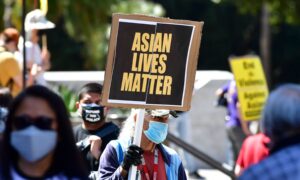 Pointing to the uptick in crimes against Asian Americans, the regime is telling the United States to sort out its own affairs before criticizing Beijing for its severe human rights violations.

Propaganda exploiting America’s domestic problems is a well-worn tactic used by the CCP and other authoritarian regimes to deflect criticism of its own malign actions.

In recent weeks, state-controlled media have been churning out reports daily framing the violence as a result of heightened Western criticism directed towards the Chinese regime.

Chinese diplomats, meanwhile, have wielded such incidents as a weapon to divert attention away from the CCP’s domestic abuses, and depict its own governance model as superior to democracy.

“Since the pandemic began, the incidents of Asian Americans being humiliated and even assaulted in public have been found everywhere, and some American politicians have misled the public on purpose,” the regime states in an 18-page report.

It accuses the United States of “hypocrisy, bullying … and double standards,” saying that the U.S. government, “instead of introspecting on its own terrible human rights record, kept making irresponsible remarks on the human rights situation in other countries.”

Chinese state mouthpiece Xinhua followed up on the report with a commentary purporting to show “America’s inherent human rights sins.” The public outcry on violence against Asians will likely result in “perfunctory measures” from the United States, it claimed, but “without sweeping reforms and an earnest attitude, Uncle Sam can hardly clean up its mess in human rights protection, let alone act as a beacon.”

The narrative is being aggressively pushed as the Chinese regime doubles down on its propaganda offensive in the face of increasing pushback from the West over a range of issues from human rights abuse to economic coercion.

While harassment and assaults on Asian Americans raise legitimate concerns for public discussion, Beijing’s accusations are not given in good faith and show the lengths the regime will go to in order to shirk responsibility for its own abuses, according to policy experts and Asian Americans who have worked in Chinese state media and the U.S. government.

“This is literally what makes them so dangerous—that anything that they do as Chinese Communist Party is ‘right in their eyes,’ and henceforth cannot be subjected to the same amount of criticism,” he said.

“Yes, racism does exist in America. And so it does China … But the question is, how much transparency is there [in China]?”

A week earlier, top Beijing diplomats gave Biden officials a public dressing down during their first in-person meeting in Alaska, saying that the United States can “do better on human rights” and that “China has the Chinese-style democracy.”

The regime has also slapped retaliatory sanctions on U.S., Canadian, European, and British officials for jointly punishing China over Xinjiang abuses, an accusation that it had vehemently denied despite extensive evidence.

“If the US government could truly care for and safeguard the lawful rights of ethnic minorities as China does with the Uyghur and other ethnic groups in Xinjiang, the problem of racial discrimination in the US would have been solved long ago,” said China’s foreign ministry spokesperson Hua Chunying in a recent press conference.

The tongue-lashing seen during the Alaska meeting displayed in full “what [the CCP’s] attitudes really are to the free world and to the values in the free world,” said Kim.

Terms such as “Chinese-style democracy,” he said, are “only used to literally justify all manner of ruling, or even all types of actions—criminal actions by the CCP.”

“The CCP can put the word ‘Chinese’ on whatever they want, but that doesn’t mean that the CCP itself represents China or its culture in any way.”

“It’s just a poor excuse to do whatever they want to do to their own people.”

A Global Times reporter has gone one step further to cast the phrase “wolf warrior”—a term initially adopted and popularized by the regime to describe the aggressive approach used by some Chinese diplomats—as “clearly racist” and proof of the West’s “white supremacy.” The term is a reference to two hit Chinese action films with nationalistic overtones that were released in 2015 and 2017.

The outlet has labeled Western politicians and scholars who criticize the regime, such as by highlighting its lack of transparency over the COVID-19 virus origin, as “China haters,” saying: “Every time Asian communities are attacked, injured or killed in hate crime incidents, the victims’ blood is also on hands of these people.”

A Global Times illustration portrayed the Statue of Liberty drowning in the ocean, with a giant metal ball labeled “racism” chained to her leg.

“Who is happy if America is in chaos?” she asked.

“It is abundantly clear that Chinese state media is supporting CCP and ‘woke’ leftist propaganda,” he told The Epoch Times. “This ploy is merely a distraction from the larger, criminal acts being carried out by the CCP regime.”

Miles Yu, who acted as the principal China policy adviser for the Trump administration’s State Department, also noted the irony that the accusations are coming from “one of the most brutal regimes in human history.”

“This is the country that conducted wholesale genocide against the Uyghurs, this country that has killed tens of millions of ordinary Chinese for political reasons, has starved to death almost 40 million people,” he said, alluding to the Great Chinese Famine, a three-year disaster from 1959 to 1961 stemming from CCP leader Mao Zedong’s radical political campaigns that devastated the country’s agriculture and economy.

“So for a regime of this nature to criticize America as being a racist, it’s just the height of hypocrisy.”

“This is just the CCP cynical ploy to delegitimize the American model of governance, to discredit the Americans’ democratic virtues, and we should never fall for that,” he continued. “I think most people in the world just laugh at that.”

If anything, Beijing’s campaign has shown “the fundamental difference between the CCP regime and the United States,” Kim said.

“At least in the United States, and in the free world, we have the opportunity to criticize ourselves and better ourselves. But in China under the CCP, no opportunities are given to its own people,” he said.

“Whatever accusations are made against them, they always, always, always deny that any of these problems are happening, like the concentration camps, like the slave labor, like the persecution against Falun Gong.”

“This is a sign that the people in China are really the ones that are suffering.”

If the CCP is really “brave enough,” it should open up for independent investigations from the West and allow domestic critiques, Yu said.

“Chinese government doesn’t have the guts. It’s a closed society. It’s a government ruled by an iron hand, and it is ruled under the extreme Marxist-Leninist ideology that does not allow any dissent,” he said.

“So this is a tragedy of our time.”

How to Boost Brain BDNF Levels for Depression Treatment