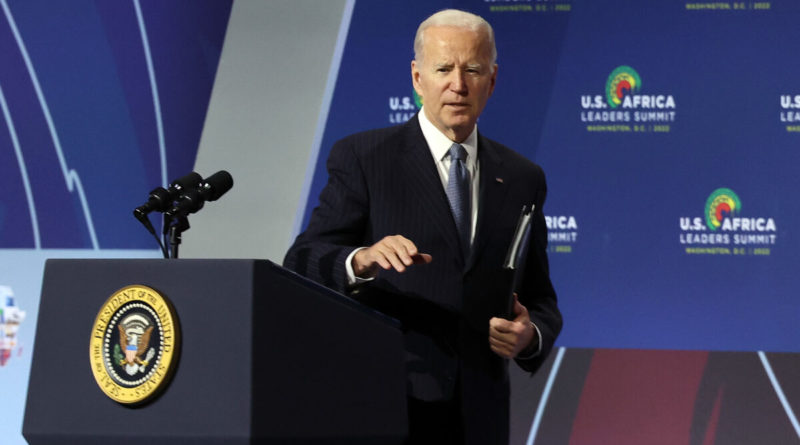 
President Joe Biden on Wednesday pledged to boost trade relations between Africa and the United States while strengthening the former’s food supplies, democracy, and economic development.

Speaking at the U.S.–Africa Business Forum in Washington, Biden announced a string of actions aimed at improving relations with the continent that amount to billions of dollars.

Delegations from 49 countries and the African Union, including 45 African national leaders, are attending the three-day summit in the U.S. Capitol, which kicked off on Dec. 13 and marks the first time such a gathering has taken place since 2014 under former President Barack Obama’s administration.

“The United States is all in on Africa’s future. And the work we’ve done over the past two years, building on decades of vital investments made under previous American presidents, has helped make possible the critical steps that I’m about to announce,” Biden said.

According to Biden, the United States has a multi-prong approach aimed at strengthening ties with Africa, including the signing of a memorandum of understanding with the new African Continental Free Trade Area Secretariat, which the president said will “unlock new opportunities for trade and investment between our countries and bring Africa and the United States even closer than ever.”

The president also announced the implementation of the African Continental Free Trade Area, which he said will “represent one of the largest free trade areas in the world, with 1.3 billion people, and a continent-wide market totaling $3.4 trillion.”

Other announcements include advancing opportunities for businesses in Africa that are owned by women or those from historically underserved communities, supporting investment in growing urban economies, and improving transportation.

Biden said roughly $500 million will be invested to build and maintain roads, and put in place policies that reduce transportation costs, which will make it faster and easier to ship goods from the Port of Cotonou in Benin to neighboring landlocked countries. That is part of the Millennium Challenge Corporation (MCC).

“We expect the MCC to commit an additional $2.5 billion across Africa in just the next three years, supporting everything from agriculture to transportation to access to renewable energy,” Biden said.

Elsewhere, Biden pledged up to $370 million from the U.S. international development finance fund for new projects, including investing $100 million to increase clean energy for sub-Saharan Africa and $20 million to provide financing for fertilizer for smallholder farmers, as well as $10 million to support small- and medium-sized enterprises that help bring clean drinking water to communities all across the continent.

China Hits Back at US

Biden stopped short of mentioning China in his speech, which has historically been one of the largest investors in Africa, averaging about 27 percent of its investments in Africa over the past 10 years, and subsequently boosting its influence in the region.

Beijing has also held its own high-level summits with Africa every three years for more than two decades.

Instead, Biden said in his speech, which comes amid growing tensions between Washington and Beijing, that “when Africa succeeds, the United States succeeds and, quite frankly, the whole world succeeds as well.”

Elsewhere, State Department spokesman Ned Price told reporters on Monday that the United States is “not looking for a relationship that is transactional, that’s extractive, that is burdensome, or leaves various countries in a more fragile, poor state after a deal is done.”

Despite officials’ insistence that the move to strengthen ties with Africa is being done in an effort to help build a stronger future for the nation, the Biden administration’s announcement has riled China.

In a statement on Wednesday, foreign ministry spokesperson Wang Wenbin declared that the United States should “respect the will of the African people and take concrete actions to help Africa’s development, instead of unremittingly smearing and attacking other countries.”