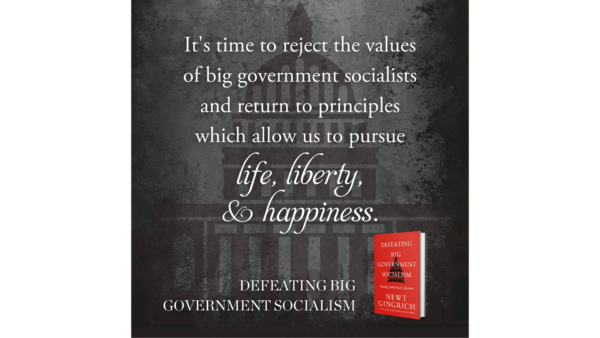 
Some of my previous book reviews have included Peter Schweizer’s “Red-Handed: How American Elites Get Rich Helping China Win,” Alex Joske’s “Spies and Lies: How China’s Greatest Covert Operations Fooled the World,” Peter Hegseth’s “Battle for the American Mind: Uprooting a Century of Miseducation,” and Dr. Ben Carson’s “Created Equal: The Painful Past, Confusing Present, and Hopeful Future of Race in America.”

I mention these authors and titles as a prelude to this review.  While each of them has a specific focus, they all share in the belief that American exceptionalism is under attack; that foundational values, which many Americans honor and hold dear are under siege; and that navigating the current, pervasive and destructive narrative is challenging at best.

They are all strong, conservative, and caring voices.

Another such voice is Newt Gingrich. A former speaker of the U.S. House of Representatives, 2012 presidential candidate, author of more than 40 books, chairman of Gingrich 360 (a multimedia production and consulting company), and, admittedly, cheerful patriot, Newt Gingrich puts it all together in “Defeating Big Government Socialism: Saving America’s Future.”

The Danger of Big Government

He does a stellar job of laying out the liberal landscape and where landmines are to be found in so many of our institutions from academia and churches to big business, the media, and public health. Then, he arms readers with strategies to resist these destructive influences.

Gingrich believes that the United States is in trouble and being complacent is not the answer to combat domestic and foreign threats.

With a doctorate in history, Gingrich is a devotee of the Founding Fathers and their role in creating a government with a system of checks and balances to prevent the rise of tyranny.

The Founding Fathers were merchants, farmers, lawyers and themselves students of history. They were astute observers. They looked to England’s Civil War in the mid-1600s, the rule of kings, the rise of parliament, the French Revolution, the Republic of Rome and the consequences of governments in chaos.

They understood that centralized power can lead to tyranny. Thus, the rule of law, faith, morality, strength and honesty were all ingredients when crafting the Declaration of Independence.

As he writes: “Wokeness, wokeism, or woke-think is the modern expression of the Marxist method of using language and propaganda to drown previous cultural notions of morality and replace them with the new, state-defined notions of morality.”

In this case, the goal of American wokeness is in part to erase the American belief laid out in the Declaration of Independence: “We hold these truths to be self-evident, that all men are created equal, that they are endowed by their Creator with certain unalienable Rights, that among these are Life, Liberty and the pursuit of Happiness.”

Gingrich goes on to assert that according to the woke doctrine, Americans can’t be created equal because all non-white Americans have been born into a systemically racist system that prevents equality. Woke equity is government imposed equal outcomes as the goal rather than an acknowledgement of God-given equality bestowed on all.

At the heart of woke culture is the elite’s ability to redefine words, create new ones and insist that everyone adopt the new lexicon.

Gingrich explores the dangers of big government particularly as it affects today’s most vulnerable, our children, and what has happened in the educational system over the last decades: a move toward mediocrity and groupthink. Worse, policies in place promote discrimination in the schools rather than getting rid of it.

Big tech, big corporations, public health, the border, the current administration, education, churches—no arena is sacrosanct from the threats to our nation’s safety and future as a free country with the current forces at work.

Now Is the Time

The book was first published in July 2022 so its messaging hasn’t reached a one-year mark. In other words, the content is very fresh and relevant. There is data included from a number of polls suggesting that the majority of Americans, both parties, aren’t happy with the size and cost of government these days and certainly not a fan of its current direction.

Serving as the 40th President of the United States from 1981 to 1989, Ronald Reagan is highly regarded as a voice for modern conservatism. He believed in teaching history and what’s important to preserve freedom. It is fragile and needs protection.

Gingrich quotes him several times throughout the book not just for his insights but also for his staunch and unrelenting patriotism.

For Gingrich, Reagan’s words serve as a warning:

Freedom is never more than one generation away from extinction. We didn’t pass it to our children in the bloodstream. It must be fought for, protected, and handed on for them to do the same, or one day we will spend our sunset years telling our children and our children’s children, what it once was like in the United States when men were free.

Gingrich, a trusted and astute leader, man of faith, and passionate and persistent patriot, offers readers a well-researched and written narrative.

It is not without hope. It’s a persuasive course of action to secure a brighter and safer future. It’s a must read.

Anita L. Sherman is an award-winning journalist who has more than 20 years of experience as a writer and editor for local papers and regional publications in Virginia. She now works as a freelance writer and is working on her first novel. She is the mother of three grown children and grandmother to four, and she resides in Warrenton, Va. She can be reached at anitajustwrite@gmail.com

‘Get Used to Paying More for Food’ Over Inflation