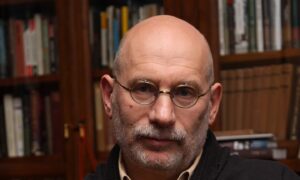 Many years ago, during the twilight of the Soviet Union, millions of Soviet citizens enjoyed the guilty pleasure of reading a detective novel or two. Emphasis should be placed on the word “guilty,” for, with the exception of Vasily Livanov and Vitaly Solomin’s depictions of Sherlock Holmes and Dr. Watson on Soviet state television from 1979 until 1986, the Soviet government frowned on the detective genre.

This stemmed in no small part from Marxist interpretations of the genre as thoroughly wedded to bourgeois rationalism, individualism, and the ideology of the capital marketplace. Fictional detectives, especially those like Holmes or Dorothy L. Sayers’s Lord Peter Wimsey, were critiqued by communist literary critics for their lack of revolutionary consciousness. Thus, so many mystery-hungry Soviets, such as Grigory Chkhartishvili’s wife, dared to read mystery novels in public only if they were first covered with brown paper.

Few know the name Chkhartishvili, but millions of readers around the world know who Boris Akunin (b. 1956) is. Chkhartishvili, an ethnic Georgian and a third-generation Muscovite, is a Russian author and specialist in Japanese literature and culture. He took the name “Boris Akunin” (Japanese for “great bad man”) to single-handedly invent the modern Russian detective novel.

His first publication under the Akunin nom de plume, 1998’s “The Winter Queen,” introduced the world to the detective Erast Petrovich Fandorin. Unlike so many fictional detectives, Fandorin is fully human and regularly vulnerable, which means he has weaknesses, doubt, and a less-than-rosy past. He also has a pronounced stutter.

Forced to leave Moscow State University due to his deceased father’s huge debts, Fandorin gains employment as a clerk with the police. His natural genius shines through, and soon enough, Fandorin is made a detective and a member of the secret police known as Third Section of His Imperial Majesty’s Own Chancellery.

Looking to Other Writers

Given that the Fandorin novels are set during the age of the Russian Empire, and since Fandorin is as much of a spy as he is a gumshoe, Akunin’s novels see the detective thrown into several different maelstroms across the world. In “The Turkish Gambit,” Fandorin finds himself in Bulgaria during the Russo-Turkish War of 1877–1878. In “The Diamond Chariot,” Fandorin’s case involves not only the Trans-Siberian Railway, but also the Russo-Japanese War in northern China and Korea.

Besides their historical character, the Fandorin mysteries are dedicated to the classic tropes, themes, and creators of the mystery genre. Take for instance “Murder on the Leviathan.” Set aboard a passenger ship in the 1870s, “Murder on the Leviathan,” with its theme of cursed archaeology, its multiethnic passengers, and intricate mystery, recalls the great Agatha Christie and her novels like “Death on the Nile.”

This is no coincidence either; Akunin is a lover of the mystery genre, and his Fandorin novels pay homage to the mystery genre’s past. “He Lover of Death” is Dickensian, while the short story collection “Special Assignments” places Fandorin in the heart of Victorian London during the days of Jack the Ripper, arguably the most written about serial killer in literary history.

The bygone days of the Russian Empire are also honored. This is not to say that Akunin’s novels are blind paeans to tsarism. There are plenty of duplicitous characters who populate these novels, and not all of them are bomb-throwing Bolsheviks or common thieves. Corrupt Russian bureaucrats, idealistic students influenced by too much Nietzsche, and royal psychopaths appear just as often.

However, one cannot help but read the Fandorin novels and fall in love with the common nobility of the period. The characters behave with manners. They have honor. They have loyalty, and no character is more loyal than Masa. Masa, who first appears in “The Diamond Chariot,” is a former yakuza gangster whom Fandorin hires to be his ninjitsu teacher. Masa saves Fandorin’s life time and time again in the novels, all the while thinking what can be construed as racist, or at least anti-Western opinions about European hygiene and gender relations.

The Fandorin series is the apex and apogee of historical mystery greatness. Akunin is an expert stylist and someone interested in the granular details about Russian history, its imperial culture, and the uniqueness of the Russian soul. The Fandorin novels are also a true feast for mystery and detective fiction lovers, and they offer the rare cross-cultural opportunity to see a traditional locked-room plot transported to 19th-century Russia.

Benjamin Welton is a freelance writer based in New England.

A Common Cancer No One Talks About