HUNTINGTON BEACH, Calif.—A picture of young teenagers having fun with their friends is taped to a traffic post on the intersection of Newland and Yorktown, while the sidewalk just below is covered in colorful flowers, sports gear, and candles.

What started as a routine weekday drive in Joshua and Jeremy Page’s white 1990 Ford F-250 to Edison High School changed the lives of their community forever.

Around 8:15 a.m. on March 7, the Westminster Calif., the brothers collided with a Huntington Beach city truck at that very intersection.

Just blocks away from Edison High School, the collision would first take the life of Joshua, 18, after both brothers were transported to a local hospital. Jeremy, 17, would succumb to his injuries in the early hours of the next morning.

“I am so sorry to hear about the tragic traffic collision that took place this morning,” Huntington Beach Mayor Barbara Delgleize said in a statement on Monday.

“On behalf of myself and the City Council, we wish to extend our sincerest condolences to the families impacted by this terrible accident.”

The brothers were noted as being star athletes in multiple sports, including the Edison High School football team, and were also active members at Saint Vincent de Paul Catholic Church and participated in the Boy Scouts.

“Our City has experienced tremendous loss over the last few weeks. Thank you, Edison students & staff, for supporting HBPD yesterday in the midst of your own grief,” Huntington Beach Police Department posted on Twitter.

“The HBPD is committed to supporting you as you mourn the loss of 2 members of your Charger Family.”

The brother’s impact on their fellow Edison Chargers could be seen when hundreds of students and local community members participated in a candle-lit vigil held at the high school on Monday evening in memory of their legacy.

“I got there early and sat in the parking lot watching all the students, teachers, staff, friends, football players, parents, their boy scout master and even the 1st responders came in honor of Josh and Jeremy,” Rocky David Whan wrote on Facebook after the vigil.

“Stand Tall, two of our finest have left the field of battle!”

Trauma councilors were brought in the next morning to Edison High School to accommodate teachers and students impacted by the loss of the Page brothers.

The school encouraged students to wear their Edison athletics jerseys or the schools’ colors of green and gold in honor of the brothers on Friday.

“We are doing this in collaboration with football, wrestling, and track since the Page brothers were on those teams and heavily involved in sports at Edison,” the invitation stated.

“Sending love from the Charger family to the Page family.” 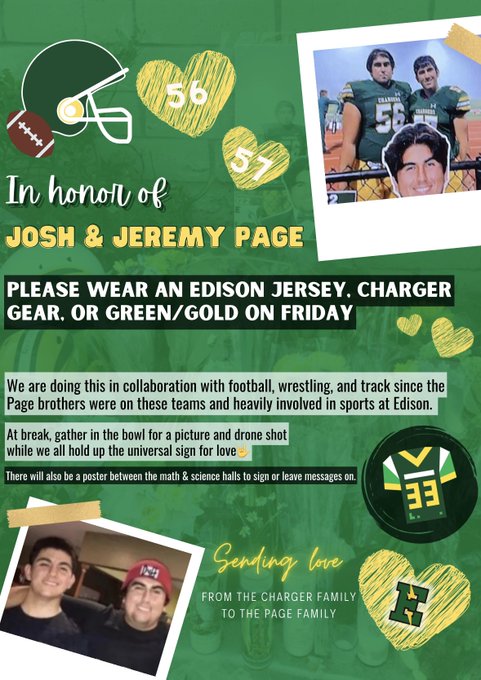 A GoFundMe page has been created to help with the upcoming funeral expenses for the brothers to help parents John and Shaya Page which has raised more than $180,000 of its $200,00 goal with over 2,500 donations as of March 10.

“As you can imagine, the Page family has had their entire world flipped turned upside down,” family friend and donation page creator Ed LaLonde shared on the GoFundMe page.

“Rest In Peace Josh and Jeremy Page,” the post added. “We Love You. Go Chargers For Life!!!!”

Because the crash involved a city of Huntington Beach vehicle, the investigation is being conducted by a major accident investigation team from the Irvine Police Department.

Any witnesses of the crash or the events leading up to the event are encouraged to contact Irvine Police Det. Roberto Solis at 949-724-7024.

John Fredricks is a California-based journalist for The Epoch Times. His reportage and photojournalism features have been published in a variety of award-winning publications around the world.

Alabama Jumps Cincinnati to No. 2; Oklahoma Falls to 12th

Architecture, Philosophy and the Good Life in China’