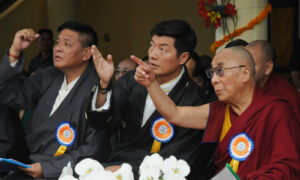 After two rounds of elections in January and April, 53-year-old Penpa Tsering defeated his rival Kelsang Dorjee Aukatsang, becoming the fifth directly-elected president of Tibetans in exile and the third since the 14th Dalai Lama handed over all political power in 2011.

On May 27, Penpa Tsering took the oath of office at the Songtsam Hall of the Tibetan government-in-exile’s Supreme Court. Tibet’s spiritual leader, the Dalai Lama, watched the live streamed ceremony.

In his inaugural speech, Penpa Tsering said the Kashag (cabinet) under his leadership would adopt the “Middle Way Approach” formulated by the Dalai Lama and seek a non-violent solution to the China-Tibet issue with the Chinese Communist Party (CCP).

The “Middle Way Approach” refers to the true autonomy for Tibet proposed by the Dalai Lama in 1979 within the framework of the CCP’s constitution, which includes autonomy over Tibet’s culture, religion, language, ethnic identity, and ecological environment.

Penpa Tsering said his government will try to pool the wisdom of the Tibetan people, optimize the global promotion of Tibet, expose and correct the wrong policies of the CCP on Tibet, make every effort to seek interaction between domestic and overseas Tibetans, and make efforts to realize the Dalai Lama’s wish to visit China.

In a speech delivered via video, the Dalai Lama congratulated Penpa Tsering on his election and praised former Sikyong Lobsang Sangay for his outstanding contributions during his two terms in office over the past 10 years. The Dalai Lama stressed that the democracy of the Tibetan community in exile is not a sham but a real democracy that is comparable to all other democracies in the world.

On May 26, the day before Tsering’s inauguration, former Sikyong Lobsang Sangay delivered his farewell speech. Sangay said the past decade had seen the CCP’s refusal to engage in any discussion of human rights and democracy, and an escalating belligerence.

On his official foreign visits as the Sikyong, he had experienced first-hand the impact of the CCP’s pressure on governments to keep distance from the Central Tibetan administration, leading to last-minute cancellations of meetings or downgrades of meetings to lower-level officials.

Born in 1967 in the Bylakuppe refugee camp for Tibetans in Karnataka, southern India, Penpa Tsering graduated from the economics department of Madras Christian College in Chennai in 1988. He served as the speaker of the Tibetan Parliament in Exile from 2008 to 2016 and the Dalai Lama’s representative to North America from 2016 to 2017.

History of the Tibetan Exile Government

In October 1950, the CCP invaded Tibet and forced the Tibetan government to sign a “17-point Agreement.” The CCP claimed it’s actions amounted to a “peaceful liberation” of Tibet but according to a speech of Lobsang Sangay in Australia in August 2017, the CCP’s so-called “peaceful liberation” of Tibet had resulted in the deaths of millions of Tibetans, the destruction of 98 percent of Tibetan monasteries, and 99 percent of monks and nuns being forced to resume secular life.

The Central Tibetan Administration has administrative, legislative, and judicial organs, implementing the “separation of the three powers.” In 2011, the government-in-exile began holding elections by universal suffrage to govern for five-year terms. Lobsang Sangay was the first elected Sikyong and served two terms.

Gen. Milley appears to defend talking to China behind President Trump’s back