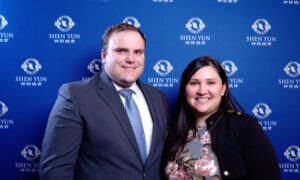 “My wife is very into dance, [and is] very interested in the culture and the language. And so as a birthday gift to her, I thought this would be a great opportunity to learn more about China’s history and culture and enjoy the things that she’s interested in like music and dance,” Mr. Egbert, a builder and operator of geothermal power plants, said from the performance at the Pioneer Center for the Performing Arts in Reno.

Ms. Len, a dance teacher, was overjoyed when she discovered that her husband had bought tickets for Shen Yun.

“I love it. It’s so beautiful, so vibrant, it’s amazing. I feel like I’m right in there when I’m watching everything,” she said.

Each dance piece displays the essence of the traditional Chinese culture’s core values, through stories from ancient times to the present day.

“The way [the dancers] are … very calm and strong at the same time. They’re very soft and strong, and they just have a good spirit. You just feel inspired … to be better,” she said.

“You can tell that [Chinese culture] is something from heaven—so beautiful and touching.”

China’s five millennia history is founded upon the belief that its culture was a divine gift from heavenly beings. Thus, Shen Yun’s storytelling portrayed through dance has themes that underline the importance of living a moral life.

Mr. Egbert expressed appreciation for the spiritual content in many of the stories portrayed in Shen Yun and said he was interested to hear about other people’s beliefs.

Reporting by NTD and Diane Cordemans.

After a Home Fire, Bathe Pet and Visit Veterinarian