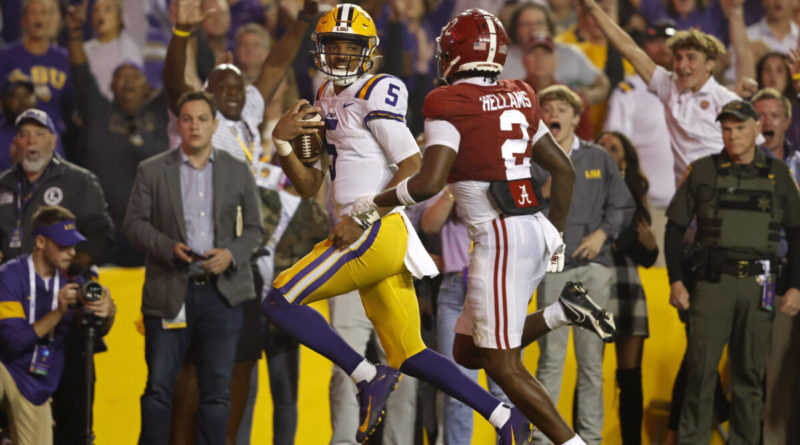 
BATON ROUGE, La.—First-year LSU quarterback Jayden Daniels was unflappable in the face of an Alabama defense that sacked him six times.

First-year Tigers coach Brian Kelly made bold decisions while trying to capture a maiden victory over Nick Saban and the Crimson Tide.

Together, Daniels and Kelly helped produce a scene of sheer rapture at Death Valley—something that was hard to envision when the two joined a program coming off consecutive non-winning seasons.

Daniels ran for 25-yard touchdown in overtime and then found Mason Taylor for a do-or-die 2-point conversion, and 15th-ranked LSU seized control of the SEC West race with 32–31 victory over No. 6 Alabama on Saturday night.

“I had never beaten Alabama,” Kelly said. “I was emotional, not for myself, but I was emotional for our team. Because I know what we looked like in January and to see where we are today, that’s pretty emotional.”

Jubilant fans stormed the field after LSU (7–2, 5–1 Southeastern Conference) triumphed in a riveting game that included six second-half lead changes and a tying field goal by Alabama in the final 30 seconds.

Alabama (7–2, 4–2) began overtime with the ball and took a 31–24 lead on Roydell Williams’ second touchdown of the game.

But Daniels needed one play in overtime to score and force a decision by Kelly to try to tie it with a kick or let the Arizona State transfer try to win it.

“If you asked me before the game started, ‘Hey I’m going to give you one play and if you are successful on that one play you are going to beat Alabama,’ I would have taken it 100 times out of a hundred,” Kelly said. “At that moment, it kind of hit me that way. I knew we had a really good play that we hadn’t used and (Alabama) hadn’t seen. When you get (Daniels) out on the perimeter you truly have a threat. So I felt really good about the play.”

The winning play began with Daniels rolling right before throwing to Taylor along the goal line. Taylor was tackled at the pylon but with the ball narrowly across the goal line.

“I felt comfortable with the play,” Daniels said, adding that he, like Kelly, didn’t want a second overtime. “If it wasn’t there, hopefully I could make something of it with my legs. But I was able to give Mason a ball he could catch and the rest is history.”

Alabama, favored by nearly two-TDs, lost in Tiger Stadium for the first time since 2010.

“It would be an understatement to say how disappointed our team is,” Saban said. “Sometimes, we beat ourselves too much and it’s kind of hard to overcome. It was a tough loss, but there’s nobody that feels worse about it than the players.”

Kelly, who as Notre Dame’s coach lost to Saban and Alabama twice in college football’s postseason, became the coach to end LSU’s decade-long run of home futility against the Tide at the beginning of a 10-year contract worth nearly $100 million.

“To come here and restore the pride and tradition of this program just means so much,” Kelly said. “It just feels so good to return the faith and trust that they’ve given to me.”

Daniels passed for 182 yards and two touchdowns, and also ran for 95 yards and a score. Josh Williams had a 2-yard TD run for LSU.

Alabama’s Bryce Young passed for 328 yards and one touchdown, and also was intercepted.

“Obviously, this isn’t the outcome we wanted, but I am super proud of our team,” Young said. “These are my brothers and this is tough.”

There were three lead changes in the final 4:44, starting when Young narrowly escaped a sack, scrambled right and found Ja’Corey Brooks for a 41-yard touchdown.

LSU went back in front 24–21 with 1:47 left in regulation when Daniels hit Taylor, a true freshman, in the back of the end zone for a 7-yard score.

But Young drove Alabama to the LSU 28 and Will Reichard’s 46-yard field goal with 21 seconds left tied it.

Alabama took its first of two fourth-quarter leads with the help of face mask and defensive holding penalties by LSU that negated what would have been a third-down sack.

A crowd of 102,321 turned Death Valley into “Deaf Valley” with ear-splitting roars that seemed to send vibrations coursing through the nearly century-old stadium.

The crowd “created an energy unlike on I can remember,” Kelly said. “That was truly a home-field advantage.”

Alabama: Young was sacked twice and routinely threw under pressure. He came in completing 66 percent of his passes for the season but connected on 49 percent (25 for 51) in Tiger Stadium. The Tide also was penalized nine times for 92 yards.

LSU: The Tigers’ defense has improved since giving up 40 points in a loss to Tennessee on Oct. 8 and 35 points in a victory at Florida on Oct. 15. After holding explosive Ole Miss to 20, the Tigers kept the Crimson Tide out of the end zone for three quarters.

Alabama: At No. 11 Mississippi, which had this weekend off.

LSU: At Arkansas, which will be trying to regroup from loss to No. 23 Liberty.

Russian and Belarusian Players Allowed to Compete at US Open

Sen. Paul says Fauci’s ‘I am the science’ is an expression of ‘extreme arrogance’