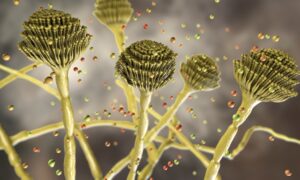 Amie Skilton, a nutritionist based in Australia, used to be very healthy. However, two months after moving into her new home, her brain began to malfunction. For instance, she would forget her own name and suddenly not know how to get dressed. She was later diagnosed with type 3 Alzheimer’s disease. Afterwards, she discovered that it was all related to a water leak in her new home and the resulting severe moisture and mold.

After Skilton moved again and into a different house without water leaks, her condition gradually improved, and her brain function returned to normal.

Can Mold Cause Dementia?

Type 3 Alzheimer’s disease (AD) can also be called inhalational Alzheimer’s disease. A study published in 2016 by Dale E. Bredesen, a neurodegenerative disease specialist at the University of California, San Francisco, mentioned that type 3 AD is associated with exposure to mycotoxins and is a treatable disease.

Although AD is the most common form of dementia, type 3 AD is rarely mentioned. Among the many studies on AD, a few have tried to identify the link between mold and AD.

A 2015 study showed that fungal cells and hyphae were found in brain sections of some deceased Alzheimer’s patients, and the morphological classification of fungi includes molds. The researchers concluded that the cause of AD might be a fungal infection, but it is also possible that the patients’ immune systems deteriorated, and they became infected by the fungi.

So, can a fungal infection really cause AD? According to Dr. Chih Hao Lin, neurologist and director of the Brain Stroke Center at Lin Shin Hospital in Taiwan, it is not yet a mainstream theory. Some existing studies are unable to clarify the cause-and-effect relationship between the two.

Since AD is a complex disease, there are many relevant theories, such as the theories of poor vascular circulation, chronic inflammation, and chronic bacterial infections, which are all believed to be able to cause dementia.

Mold Infections May Affect Memory and Cause Brain Degeneration

However, it can be confirmed that long-term mold infections can indeed affect memory.

Dr. Lin has seen many cases of meningitis triggered by mold infections in clinical settings, affecting the brain’s cognitive function and even leading to its degeneration.

Among the types of mold that cause meningitis, Cryptococcus is the most common. Its damage to the brain can be divided into two types: one is a direct attack on brain cells; and the other is indirect, due to chronic brain inflammation that eventually causes damage to the brain. Cryptococcus may also make blood vessels prone to embolism, leading to strokes and further brain damage.

The elderly and people with poor immune function, such as those with diabetes, malignant tumors, or long-term steroid use, and those who drink alcohol to the point of developing cirrhosis, are all at a greater risk of developing meningitis than the general population. The initial symptoms may resemble those of a cold, with a mild headache, low fever, and no significant discomfort. Over time, however, a patient’s brain function deteriorates, and his or her responses become increasingly blunt, and there may be epilepsy, or even weakness in his or her limbs on one side of the body.

“In clinical settings, I often encounter people who have been drinking to the point of developing cirrhosis, and whose immune function has become very poor. If these people have poor hygiene practices or sometimes collapse in the street due to drunkenness, it is easy for them to be infected by mold,” said Dr. Lin.

He has also met young AIDS patients, who are at particular risk to Cryptococcus-induced meningitis. Since AIDS patients have a very poor immune system, their mortality risk from Cryptococci infection is very high. Once infected, they would suddenly suffer from severe headaches, fevers, and seizures, resulting in increased brain pressure and leading to a life-threatening condition.

Generally speaking, mold infections can be treated with medications, and many people can recover from them. As to whether or not a patient will have the sequela of brain damage, it depends on the amount of mold exposure and the severity of the infection. If it is a long-term chronic infection, and/or the infection is very severe, the patient can be prone to the sequela of cognitive dysfunction, and his/her brain won’t work properly.

5 Tips to Make Your Home Mold-Free

Mold is a microorganism that cannot be prevented in life. When someone has strong immunity, it doesn’t pose much of a problem. However, when one’s immunity becomes poor, it will cause a greater threat to the body.

Therefore, we should check whether our living environment is damp and/or moldy. Dr. Ching-Chang Lee, executive vice president of National Cheng Kung University in Taiwan and director of the university’s Research Center of Environmental Trace Toxic Substances, pointed out that whether or not the environment is humid is determined by both temperature and humidity. For instance, if you feel sticky after sweating, and it’s not easy for the sweat on your skin to evaporate, then you are in an environment with high humidity.

There are several places at home that are prone to mold growth:

In addition, there are several practical ways to avoid mold growth in your home.

The humidity level in your living space, such as bedrooms and the living and dining rooms, can be controlled between 50 to 60 percent, which is a more comfortable range.

For rooms that are filled with furniture and other items, such as a study with many books and computers in it, the humidity can be set at 40 to 50 percent.

The kitchen and bathrooms easily get moldy. If the bathroom stays too humid for a long time, mold will grow in the tile grooves.

Dr. Lee suggested that the last person to take a bath or shower should use a dry towel to wipe the water drops on the bathroom walls, faucets, and shelves after using the bathroom.

After using the kitchen counter, you should also wipe it down with a dry towel. In addition, the kitchen should be kept ventilated, and its windows must be opened.

In some homes, bathroom lights and exhaust fans are connected together, and the moment you press the switch, they both turn on or off at the same time. “However, ours are separate at home,” said Dr. Lee, “so you will find that after our bathrooms were used for many years, there’s still no mold in them.”

He explained that the advantage of separating the bathroom light and exhaust fan switches is that after using the bathroom, you can turn off the lights first and let the exhaust fan continue to operate until the bathroom is dry. Furthermore, if you use a variable frequency exhaust fan, the power consumption will not be too high.

There are often fallen leaves, flowers, and tree branches in the backyard. These types of garden debris should be cleaned up as soon as possible to not have them piled up in the yard, especially before it rains. This is because there are many microorganisms on the plants, and the broken branches, leaves, will easily become moldy after absorbing rain water and moisture.

At the same time, you should not water your plants every day, to avoid excessive moisture in the yard soil. Under normal circumstances, watering the plants once every three, four, or even five days is sufficient.

If you find that water is seeping through the walls, you should call a repairperson to fix it as soon as possible.

If you already have moldy areas in your home, there are still ways to clean them up.

Bathrooms and kitchens that are prone to mold: First, put on gloves and a protective mask, which can block most of the spores from being inhaled by you. Next, spray mold cleaner on the moldy areas, wait for 10 to 30 minutes, and gently brush these areas, and the mold can be removed. Finally, rinse these areas with water.

After cleaning, you should then take a shower, so that the spores attached to your body will not contaminate other places.

Wooden furniture: You can scrape off the moldy parts, and then repaint them. However, Dr. Lee suggested that it is best to throw such furniture away, because the mold will grow into the wood, even if the furniture surface is cleared. After a long time, when the paint wears off, mold will grow again.

Moreover, painted wood furniture is not prone to mold. If it becomes moldy, it means that the furniture should be replaced.

Window sill silicone: It is recommended to hire a professional to get rid of the moldy silicone for you.

Blue Penguin Comes Back to the Sea After Being Rescued