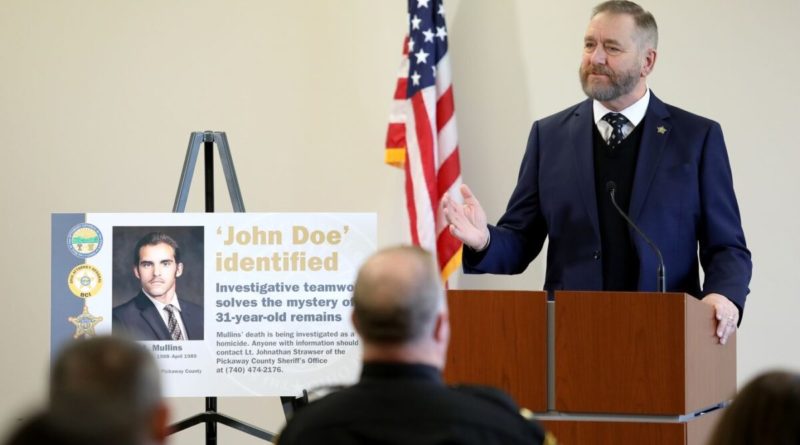 
Thirty-one years after hunters found human bones in a shallow grave in rural Ohio, DNA unlocked the identity of the apparent homicide victim and renewed hope that the killer will be found.

A remarkable blend of citizens’ cooperation, investigators’ determination, and technological advances revealed that the remains were not those of a woman, as initially thought. Instead, they belonged to a man who was 21 when he went missing in the late 1980s. He was Robert A. Mullins of Columbus, Ohio, authorities announced on Dec. 13.

Identifying Mullins serves as a step toward healing for his family. It also represents a long-awaited step forward in the investigation, said Lt. Johnathan Strawser, detective bureau commander for the Pickaway County Sheriff’s Office, which has worked on the case since 1991.

“We’re looking for any and all information about Robert and to try to figure out what happened to him,” Strawser told The Epoch Times.

Typically, investigators can identify a homicide victim within a day or two of the remains’ discovery.

“With this one, we’re definitely ‘behind the eight ball,’” Strawser said, “because it’s been over 31 years, and we’re just now identifying the person.” He said there is “very little to no evidence” for investigators to probe.  So any shred of information could be helpful, Strawser said.

What is known: “We are investigating this, clearly, as a homicide,” Strawser said. Marks left on the bones indicated the victim was purposely decapitated, then the rest of the body was taken to the place where it was discovered: alongside a farm lane, off the north side of State Route 56 in Pickaway County. The victim’s skull has never been found, Strawser said.

When the skeletonized remains were found in 1991, Strawser was a 10-year-old boy, and the Pickaway County sheriff was Dwight Radcliff.

Now age 42, Strawser, who works under Sheriff Matthew O. Hafey, unearthed a copy of the news release that the former sheriff issued. These words stood out to Strawser:  “We are all duty-bound, police officers and citizens alike, to determine this (person’s) identity” and the circumstances of that person’s death, Radcliff wrote. Those words are still as true today as they were three decades ago, Strawser said.

Some in the community still recall when the mystery began.

A man named Ron Sexton posted on the sheriff’s Facebook page: “I remember this happening…I drove by while the (Sheriff’s Office) had it blocked off, not far from our home.”

A news release from Ohio Attorney General David Yost, coupled with a news conference that was broadcast live on Yost’s Facebook page, outlines how the investigation developed.

Initially, a forensic anthropologist believed the victim was a female. That theory was based on the victim’s small stature. Bone lengths showed the victim stood perhaps 5 feet, 4 inches tall at best, Radcliff’s 1991 news release said.

Although investigators continued to work on the case, the victim’s misidentified sex presented a stumbling block.

At the time the victim was discovered, “we couldn’t get DNA out of bones,” Yost said. Later, DNA technology advanced.

In 2012, scientists at the University of North Texas extracted DNA from the bones, which proved that the Pickaway County victim was male, not female.

But DNA alone “does you no good at all,” Yost said. “You’ve got to have something to compare it to.”

For many years, DNA databases consisted mostly of samples taken from convicted criminals. If a deceased person had no criminal history, such a database would likely be useless in identifying him or her, Yost said.

But developments in DNA science, “including the ability to expand partial profiles,” combined with DNA that people provide when they seek to learn their family ancestry, “provide another link,” Yost said.

The combination of factors “is where we finally hit paydirt,” Yost said.

Genealogy Was the Key

In 2021, investigators “turned their focus to genetic genealogy” to try to identify the remains.

This past January, the Pickaway sheriff’s and coroner’s offices hired AdvanceDNA, a Texas firm, to work on the case. AdvanceDNA uploaded the victim’s genetic profile into two databases: Family Tree DNA and GEDmatch.

During the news conference, Amanda Reno, director of genetic and forensic case management for AdvanceDNA, explained the extraordinary events that led to the confirmation of Mullins’ identity.

Using DNA from the victim, her firm’s team “built an expansive family tree” of 4,000 people, she said, adding, “our research stretched into Virginia, Kentucky, Canada and all the way to England.”

Distant cousins of Mullins–who had never met him–donated their own time and their own research to help, Reno said.

“On November 1, 2022, coincidentally, exactly 31 years to the day that his remains were discovered,” Reno met with Pickaway County authorities and provided key information that led to Mullins’ identity.

Earlier this month, Mullins’ family members provided a DNA sample, which proved that the mystery remains belonged to Mullins.

From his relatives, investigators learned that Mullins had suddenly disappeared, and his family had looked for him, “especially his late mother,” Reno said, her voice’s cadence faltering a bit, apparently with emotion.

“His family explained his absence had been a great source of pain for their family,” she said. “He was loved, and he was missed.”

The Epoch Times was unable to reach Mullins’ family for comment.

‘Opening the Door for Justice’

The case shows the power of genetic genealogy as a “tool for reuniting families and opening the door for justice,” Reno said. “Every lead is made possible by private citizens who choose to participate in direct-to-consumer testing and a dedicated team of researchers in pursuit of answers.”

Reno said Mullins’ case is one of many that have been solved in Ohio recently using genetic genealogy. “As an Ohioan, when I am proud of the dedication of the agencies across the state who are exploring this tool,” she said.

Reno encourages others to get genetic testing done and upload the results to GEDMatch and Family Tree “to support other pending cases.”  Reno said she is glad to see that Mullins’ name has been restored. She hopes having him identified “will provide an opportunity for justice and also answers in his untimely death.”

Yost said: “What a tragedy to die unknown, to not have a name to put on a memorial. Today that circle closes, and that’s the first step (toward) the rest of justice.”

Yost congratulated Pickaway County officials for their dogged pursuit of the case through several administrations.

The sheriff who was in office when Mullins’ remains were found, Dwight Radcliff, retired in 2013. He was then the nation’s longest-serving sheriff, with about five decades of service under his belt. He died in 2020.

Radcliff’s son, Robert, served as Pickaway’s sheriff after his dad retired. But Robert Radcliff left office last year after losing a narrow election to the current sheriff, Matthew Hafey. Yost noted that Robert Radcliff was present for the news conference about Mullins being identified. “Former Sheriff Radcliff, I imagine your dad is looking down, going, ‘They finally figured it out,’” Yost said. “I wish he could be here today.”

Now, Yost said, it’s time for detectives “to go out and do what they do best: Hit the streets, put the pieces together. Look at the final days of Mr. Mulllins’ life and find out who did this to him…And everybody that’s worked on this case, from the folks that have retired to people that are currently carrying the badge, every one of them wants to take that guy off the street (and) hold him accountable.”

Janice Hisle writes about a variety of topics, with emphasis on criminal justice news and trends. Before joining The Epoch Times, she worked for more than two decades as a reporter for newspapers in Ohio and authored several books. A graduate of Kent State University’s journalism program, she embraces “old-school” journalism with a modern twist.

You can reach Janice by email by writing to janice.hisle@epochtimes.us

Valedictorian With Nonspeaking Autism Delivers Moving Graduation Speech, ‘God Gave You a Voice. Use It’