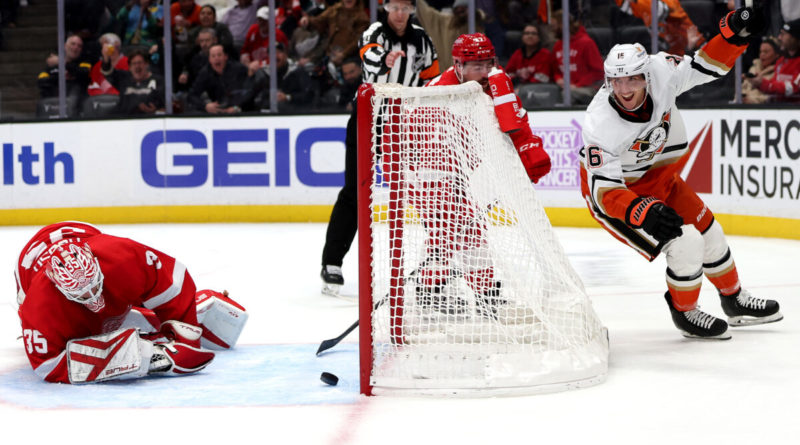 
ANAHEIM, Calif.—Ryan Strome scored on a pass from Trevor Zegras with 49 seconds left in overtime and the Anaheim Ducks snapped a three-game losing streak with a 3–2 victory over the Detroit Red Wings on Tuesday night, Nov. 15..

After John Klingberg scored his first goal for his new team with 46 seconds left in regulation to force overtime, the Ducks earned only their fifth win of the season when a backhand clearing attempt by Detroit’s Tyler Bertuzzi accidentally hit Strome in front of the net. Zegras and Strome executed a back-and-forth passing game that ended with Strome’s fifth goal of the season.

Mason McTavish scored a rare power-play goal for the Ducks, and John Gibson stopped 31 shots in only his third victory of the season.

Jonatan Berggren got his first NHL goal and Michael Rasmussen also scored for the Red Wings, who have lost four straight. Ville Husso made 27 saves on the second stop of a four-game trip for Detroit, which got a pregame boost when Bertuzzi returned from a one-month absence with an upper-body injury that kept him out for 13 games.

Berggren then capitalized on a power play when a deflection rolled right to him with an open net in the first period. The 22-year-old rookie and former second-round pick from Sweden scored his first goal in his third career game after getting an assist in his NHL debut last Thursday.

McTavish answered late in the period with a quick reaction to a rebound in the slot for his second goal of the season. His goal was just the fifth all season on the power play for the Ducks, who were in an 0–for–8 drought with the worst power-play numbers in the league.

Rasmussen put the Wings ahead in the final minute of the second period when he circled the net, fought off two Ducks defenders and unleashed a shot while skating away from the net that surprised Gibson through traffic.

Anaheim couldn’t score on a lengthy 5–on–3 advantage in the third or on two lengthy ensuing power plays, but Klingberg finally tied it with Gibson pulled for an extra attacker, flinging in a shot through traffic from the blue line. The Anaheim newcomer’s goal was only the second scored by a Ducks defenseman all season long.

Red Wings: Bertuzzi was hurt while blocking a shot in Detroit’s second game of the season. …D Gustav Lindstrom was out with an upper-body injury.

Ducks: At Winnipeg on Thursday night.

Both COVID-19 and Vaccines Can Lead to Higher Risk of Heart Condition, Study Says

Huawei CFO Meng Wanzhou Cleared of Fraud Charges in US