A former adviser to ex-President Donald Trump said May 31 that he was subpoenaed in the Department of Justice’s investigation into the Jan. 6, 2021, U.S. Capitol breach.

Peter Navarro, who was director of trade and manufacturing police during the Trump administration, made the disclosure in a lawsuit against members of the House of Representatives.

Navarro said FBI agents served him with the document, signed by U.S. Attorney Matthew Graves, in the early morning of May 26.

The Department of Justice (DOJ) did not immediately respond to a request for comment.

The subpoena would be the first one known to be issued to an official from the Trump administration in the investigation of the breach, which has consumed agency officials across the country and led to over 800 arrests.

Navarro said the subpoena ordered him to testify before a grand jury in federal court in Washington on June 2 and to hand over documents sought by the House’s select committee probing the breach, which Navarro argues is unconstitutional.

The panel subpoenaed Navarro on Feb. 9. He defied the document. The House voted in April to hold both Navarro and Dan Scavino, another former Trump administrational official, in contempt of Congress.

The new subpoena commanded Navvaro to comply with the original subpoena.

Navarro says lawmakers should have pursued less burdensome paths to secure documents and testimony from him, including negotiating directly with Trump or filing a civil suit.

Navarro is claiming executive privilege, or the power of a president to withhold and order withheld testimony and documents from when he was in office.

In the suit, Navarro said the formation of the House panel was not done properly, which renders the subpoena illegal. That would make the House contempt vote and the DOJ’s follow-up document illegitimate, he argued.

President Joe Biden has agreed to waive the privilege for the lawmakers conducting the probe.

He urged the court to “imagine what will happen,” if the subpoenas are upheld, to Biden and his advisers if Republicans win back the White House and the House in 2024.

House Speaker Nancy Pelosi (D-Calif.), panel Chairman Bennie Thompson (D-Miss.), and members of the panel were named, along with Graves, as defendants. Pelosi and the panel did not respond to requests for comment. 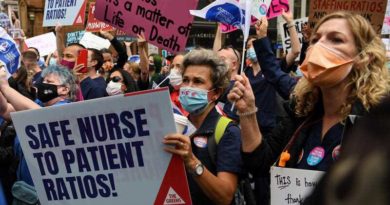 All 128 Miners Safely Evacuated After Incident at Russian Mine