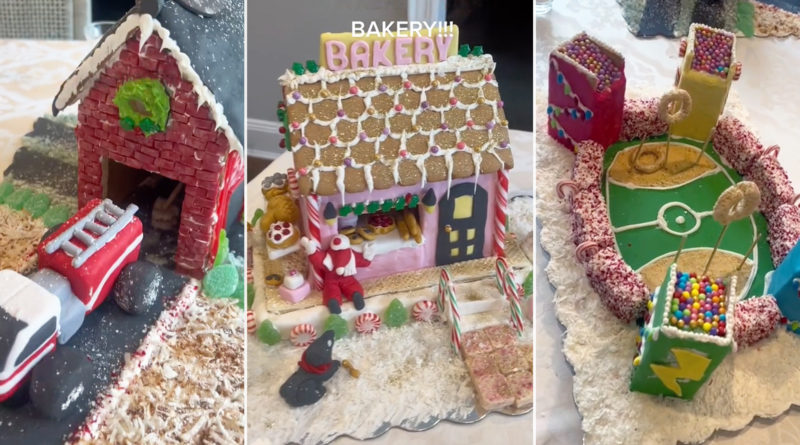 
A fun-loving family is going viral for their Christmas gingerbread house contest, an annual tradition that has turned into an epic battle for the top spot—with each entry more dazzling than the last.

Jack Tortora, 23, of Long Island, New York, has enjoyed his family’s holiday tradition for the last seven years. A University of Miami graduate, Jack currently works in finance in Manhattan but always heads home with his three brothers ahead of Christmas to compete for the gingerbread title.

He told The Epoch Times: “We’re all very artistic in my family, so everybody always has a knack for doing stuff like this. If there’s any kind of competition we can have, we’re gonna take it! It’s always been a family thing.”

Jack’s brothers fly in from Florida and Washington, D.C., with one of them even bringing in his wife to participate. This year, Jack enlisted his girlfriend of two years, Alexia, and said while she “might have been a little bit intimidated at first,” it wasn’t long before she was “completely locked in on making it.”

The family has a few rules for the contest: the entire gingerbread house must be edible (except for the occasional prop, like a candle), no two teams can make the same design, nothing can be pre-prepared, there’s no time limit, and, most importantly, no fighting.

“Also everybody has to share the same materials, so if you go and buy some kind of candy, everybody can take from it,” Jack said.

This year, Jack’s parents, Vivian and Richard, made their plain gingerbread house into a winter-themed bakery, replete with miniature baguettes since his mother enjoys baking. Jack and Alexia made a replica of a New York Fire Department station with a fire engine on rolling wheels.

Jack’s brothers, Evan and Ross, made a replica of the Quidditch arena from the Harry Potter franchise, while Jack’s brother Richie and his wife, Erica, made a cafe in the style of the movie, Ratatouille.

Sharing more about the ideas they bring in each year, Jack said: “It’s kind of evolved over the years from a normal house to random ideas, where we try to push the limits more and more,” adding that it takes an “absurdly long time.”

This year, on the eve of Thanksgiving, Jack and Alexia spent six hours on their gingerbread house, while Vivian and Richard spent closer to eight hours.

“I wouldn’t be surprised if we did a multiple-day thing one time in the future,” Jack said. Besides embracing her boyfriend’s family tradition, Alexia filmed the 2022 contest entries in all their glory and uploaded the video to TikTok. Jack’s family had gone viral a month prior for a dramatic gender reveal video, reaching eight million views, but Jack admitted he had no idea their gingerbread creations would reach twice as many, racking up close to a million views in just a day.

“I’m not going to lie, I didn’t think it was going to have this kind of reaction,” Jack said, whose family initially posted pictures on Facebook and had people vote, which then evolved to using an Instagram poll to pick a winner. This year, the judging panel comprised TikTok users, with the majority choosing Jack’s parents’ charming winter bakery as the best of the bunch.

“You know what’s funny? I think my dad has probably won 50 percent of the time,” Jack said.

In a second video, the family revealed the runners-up with the Ratatouille café in fourth place, Jack and Alexia’s NYFD station in third place, and the Quidditch arena making it to second place.

In past years they have named category winners, such as “most creative,” “most magical,” or “most holiday-spirited.” Jack has won “most creative” several times. His creations from the past include a two-story gingerbread church, a Hobbit house, and a ship from Star Wars.

For anyone concerned about the fate of these gingerbread gems, they are definitely an art and not an appetizer.

“After we build them, we always keep them out on display,” Jack said. “People love to come over and see them. We’ve had people offer money to buy them and put them in their office or their house, it’s pretty funny!”

To Jack, the Christmas tradition is more than a contest, and since Alexia moved to Michigan for medical school, working on the same team is a precious chance to spend time and make memories together.

Jack said: “I think it’s important, especially around the holidays, to spend a lot of time with the family, the ones you love, friends, and have some kind of tradition. Everybody has a reason to come together.”

Here are some gingerbread creations from the past years’ competitions:

GOP senators demand NDAA be brought to the floor

What You Need to Know When Your Joints Make Noise