Pfizer’s manipulation and misrepresentation of its Phase 2/3 clinical trial date for COVID-19 vaccines for kids under 5 is dishonest and unethical and makes the data functionally useless for making decisions.

On Sunday night, the U.S. Food and Drug Administration (FDA) released its risk-benefit assessment of Pfizer’s Emergency Use Authorization (EUA) application to inject mRNA into kids 6 months to 4 years old.

This application will be voted on at the June 15 meeting of the FDA’s Vaccines and Related Biological Products Advisory Committee (VRBPAC).  Click here to tell your members of Congress to oppose EUA of these vaccines for young children.

I read the document cover-to-cover this morning. Here are my observations.

FDA/Pfizer claim that this is a study of 4,526 participants 6 months through 4 years old. This is of course a lie. Like Moderna, Pfizer found ways to whittle down the number of participants to force the “data” to fit a pre-determined fictional narrative.

We’ll return to this in a moment.

Apparently, Pfizer thought that this clinical trial in kids was going to work, so they unblinded it on Sept. 28, 2021 and they started vaccinating the placebo group (to destroy the control and eliminate any long-term safety data) on Nov. 3, 2021 (see p. 23).

Then in early December, the data showed that the trial had failed. Whoops! So Pfizer had to scramble to enroll even more kids (643 more by my estimation) in the attempt to save the clinical trial with a third dose.

The results then become a complete muddle because Pfizer has to refer to the blinded period (before Sept. 28, 2021), the unblinded and crossover period (after Sept. 28), and then the post “protocol amendment 6 period” (Feb. 1 to the “data-cutoff” of April 29).

When it suits their needs (in the press) Pfizer points to the larger sample size. When they are trying to hide bad data (immunogenicity) they just use a tiny slice of the total sample.

This is dishonest and unethical and makes this study functionally useless for making decisions.

The Immunogenicity Section Is Preposterous

Pfizer took blood samples from just 82 children ages 6-23 months and 143 children ages 2 to 4 years old. That is less than 5% of the total sample that FDA/Pfizer bragged about at the start of the document and in the press.

Pfizer calls this the “immunogenicity population.” No explanation is given for how they selected the less than 5% of participants who would be included in this subsample. There is no bloodwork from the placebo group — so this study is not an RCT (randomized control trial).

The blood samples were taken one month post Dose 3 and measured for antibodies against the original ancestral strain of SARS-CoV-2. Of course, antibodies are highest one month after dose 3 — that does not tell us anything about health.

As I pointed out yesterday, the VRBPAC concluded at the April 6 meeting that there there are no known “correlates of protection” that one can use to predict who will be immune to SARS-CoV-2.

As Eric Rubin, Harvard Professor and editor of the New England Journal of Medicine (NEJM) states:

“We know what kind of antibody response can be generated, we just don’t know if it works.”

You don’t have to take my word for it, it’s all on video:

The antibodies in the kids’ blood samples were then compared against the antibody levels in 170 people age 16 to 25 years in a prior Pfizer clinical trial.

Once again no explanation is given for how those 170 people were chosen out of the thousands in the adult trial and why the others were excluded.

It’s sad that we even have to point out the insanity of this whole process. but here we are.

The Efficacy Data Is a Hot Mess

Having convinced no one of the utility of the mRNA shot by appealing to antibodies, Pfizer/FDA switched to “post hoc efficacy analysis” — looking at COVID-19 cases that occurred during the clinical trial (that stretched on and on because they wiped out their original control group back in November).

Berenson has already written about this (that guy is the fastest reporter in the world).

Berenson correctly focuses on Table 19 and Table 20 (p. 39). I want to highlight a few points. 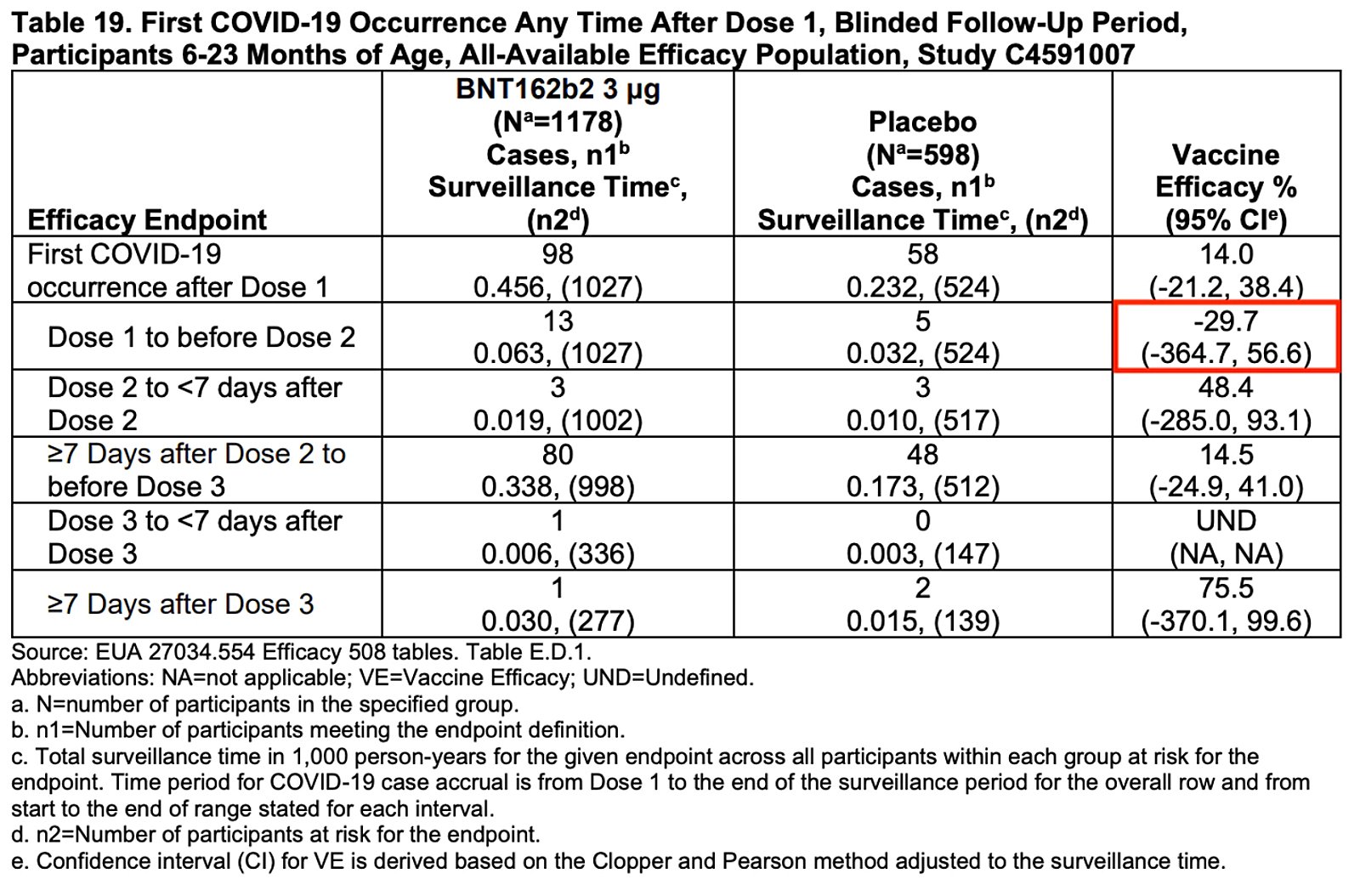 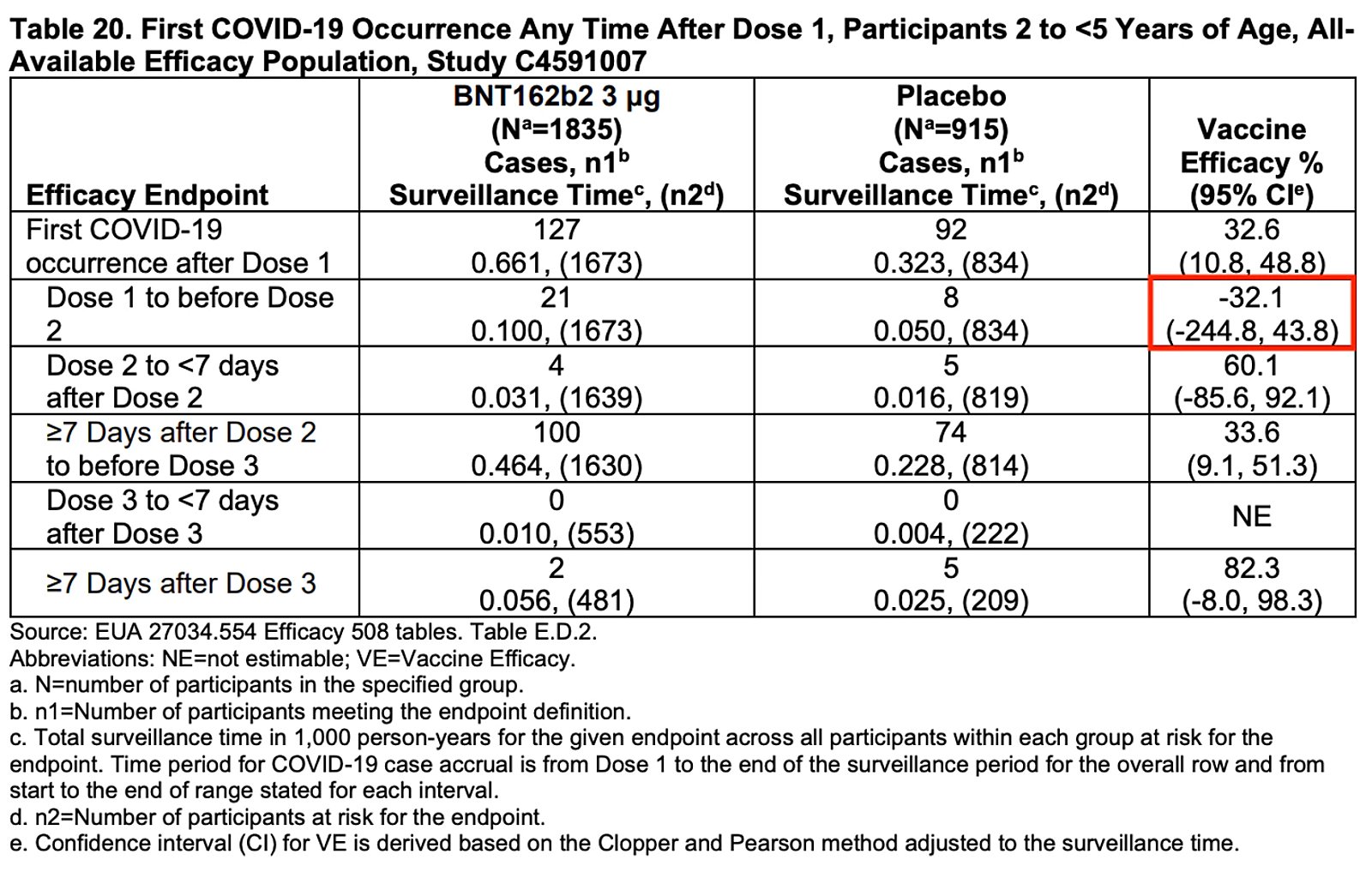 Vaccine efficacy is NEGATIVE in-between dose 1 and dose 2. We’ve been pointing this out for a year now — mRNA shots have negative efficacy after dose 1, positive efficacy for a couple of months after dose 2 (or dose 3 in this case), then efficacy dwindles to zero at six months and goes negative again after that.

And that’s just against the Alpha and Delta strains — against Omicron these original mRNA shots are basically useless.

As they did with the adult clinical trials, Pfizer stopped tracking data after six months in order to hide the long-term loss of efficacy and increase in all-cause mortality and chronic illness.

Overall the efficacy was about 20%. But remember, Pfizer wiped out the control group in November and then stopped collecting new data on the third shot (that started in February) on April 29.

So this is short-term efficacy — the best that these numbers are ever going to look. This is well below the 50% threshold that the FDA established for Emergency Use Authorization in June 2020.

Therefore this Pfizer application must be rejected.

The headlines that you have read in every mainstream newspaper touting the efficacy of the Pfizer shot in little kids are based on 10 cases that occurred at least seven days after dose 3 (the post “protocol amendment 6” group!).

There were three cases in the treatment group and seven in the placebo group after dose 3. Both Pfizer and the mainstream media ignore the 365 cases before then.

In the press, Pfizer stated repeatedly that these 10 cases were “preliminary efficacy estimates” and that they would recalculate the efficacy after they reached 21 cases post-dose 3.

So in the press Pfizer stated that 10 cases are inadequate (it is) but then that became the final version of the application — because they do not care and they don’t think the FDA has the stones to stop them.

About 10% of the children in the clinical trial had evidence of prior SARS-CoV-2 infection when they enrolled (“at baseline”) — and none of those kids got COVID from February through April when the Omicron variant was prevalent in the U.S. (p. 56).

Do you know what that means? During the crucial study period that Pfizer and the FDA really want everyone to focus on — natural immunity was 100% effective.

The Serious Adverse Events Were Horrifying, Disproportionately in the Vaccinated Group, and Mostly Ignored by the FDA

The FDA begins discussing serious adverse events (SAE) on page 51. Several things stood out to me.

The parents who enroll their children in these studies are insane and many of these children were ALREADY vaccine-injured before the trial even started.

Think about it: Who is going to enroll their child in a dangerous medical experiment? — the true believers who already over-vaccinate their kids.

Why on earth is this child in a clinical trial given that she is already badly vaccine-injured!?

Then, when SAEs happen in the trial, they usually just keep vaccinating the kid anyway, giving them the next dose as soon as they recover from the first injury.

“A 4-year-old was reported to have an SAE of severe appendicitis with onset 11 days post Dose 2. The event was reported as resolved the same day following an appendectomy. This participant reported no other AEs after any dose.”

Did you catch that? They removed the organ and marked the case as resolved. Nothing-to-see-here(TM).

“A 2-year-old [Pfizer-vaccine] recipient had a febrile convulsion 21 days post-Dose 1, which resolved the same day, with unknown cause after evaluation in an emergency department. The participant received Dose 2 three days later without additional adverse events reported.”

What kind of parent vaccinates their kid AGAIN three days after a serious vaccine adverse event!?

Six vaccine recipients withdrew from the trial because of adverse events vs. 1 placebo recipient (p. 55).

More often than not, Pfizer and the FDA just waved away the SAEs as nothing-to-see-here(TM) with little explanation other than, ‘we concluded it was not related’ — and they expect us to just take their word for it.

Occasionally the FDA acknowledges that the adverse event was likely caused by the vaccine but they seem unconcerned about that as well — they just note it and go on.

Overall, rates of adverse events in the placebo group were once again abnormally high which raises questions as to what was actually in the “placebo.”

Pfizer claims it was saline but with no one watching, no independent verification, and no FDA regulations concerning the contents of placebos, Pfizer could have chosen to put lipid nanoparticles or some other toxicants in there to increase the background rate.

In fact, if Pfizer thinks that they can get away with it (they do), then they have a fiduciary duty to their shareholders to spike the placebo in order to maximize profits.

But the other factor is that these kids were still getting their other childhood shots during the clinical trial per the CDC schedule. This is a massive confounding factor that renders meaningless any of the results of this trial (it’s impossible to know which shot caused which harm to which individual kid).

The fact that they did not stop the other childhood vaccines during the Pfizer clinical trial to get a clean result is just another example of how they simply do not care about the science or the data.

It’s an embarrassment that the mainstream media is falling all over themselves to praise this shot that is ineffective and toxic.

It’s an embarrassment that the scientific and medical establishment never insists on proper methods or scientific norms lest the cartel cut off their money.

It’s an embarrassment that anyone is promoting a dangerous shot for a population that already has natural immunity and has virtually no risk from COVID-19.

If this application is approved, it would be a crime against humanity. Any member of VRBPAC who votes Aye will face criminal prosecution at Nuremberg 2.

Dr. Meryl Nass is live blogging it on the Children’s Health Defense website (she’s delightful and informative — that’s the only way to watch the meeting and keep your sanity).

This meeting is happening via Zoom — so all of these FDA officials are at their computers. I think we should just keep pounding these people for the next two days with messages telling them to vote NO.

They’re human and prone to check email so they are likely to see the messages streaming in all day in the background or during the breaks.

Here are their email addresses:

Originally published by Toby Rogers on his Substack page, uTobian.

Wife of Disappeared Chinese Rights Lawyer Vows to Continue Searching For Him, 5 Years On