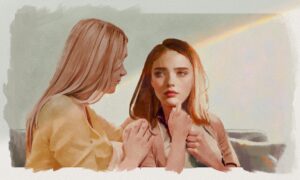 Those lines to Edith Piaf’s 1960 hit song—”No, nothing at all/No, I regret nothing”—became her trademark. Many other musicians later offered their own renditions of “Non, Je Ne Regrette Rien,” and the song has appeared in many movies and commercials.

But here’s the quandary: Can anyone beyond the age of 12 truly claim to have no regrets?

The answers to that question are yes, no, and maybe.

Some embrace that first affirmative when they adopt “No regrets” as their philosophy of life— “Chuck the past and live in the now!” Yet, the rest of us wonder: Don’t these folks ever wake at 3 in the morning to find their past transgressions parading like ghosts in their mind’s eye?

Most of us, I suspect, would go with door No. 2. We carry regrets that may stretch back decades but are as familiar to us as the morning’s headlines.

Some of these incidents may seem inconsequential, such as the time in 5th grade when I joined a group of boys chanting “Vicki has cooties!” as she passed us by on the playground. Later, I apologized, but the pain inflicted by our words remained in her eyes and has likewise remained with me to this day.

Other words and actions cause far more damage, terribly wounding those we love, friends we treasure, and ourselves. Whether by stupidity or deliberation, we mangle our reputations and harm others in the bargain. The guilt of these misdeeds haunts us as remorseless whispers in our heads.

But then there’s that third answer available to us, that tentative maybe.

In “The Power of Regret: How Looking Backward Moves Us Forward,” Daniel Pink says of the no-regret crowd:

“This worldview makes intuitive sense. It seems right. It feels convincing. But it has one not insignificant flaw.

“It is dead wrong.

“What the anti-regret brigades are proposing is not a blueprint for a life well lived.”

Pink then devotes some time to those who daily drag with them the injuries of regret and shame—sorrows ranging from marital infidelity to shoplifting a candy bar as a child. Like many of us, these are people hamstrung by the past, the walking wounded limping through the day.

But then comes that “maybe,” that third way to consider and handle regret.

Pink devotes most of his book to this alternative, explaining how to use regret as a tool for self-improvement.

“Its very purpose is to make us feel worse,” he writes, “because by making us feel worse today, regret helps us do better tomorrow.”

To conquer our regrets, Pink tells us, we must first objectively study our failures. We should then extend to ourselves that same compassion we might show to a friend who had similarly wronged another. If possible, we should make amends for what we’ve done, indirectly if necessary.

That man who wishes he’d shown more affection to his deceased wife, like one subject Pink mentions, may rue those missed moments with his spouse, but he can offset that by offering greater affection to his children, grandchildren, and friends.

Pink also tells us that it helps to confess our failings to another—a priest or minister, a therapist, or a friend.

Dealing with our regrets, as Pink makes clear, can expand our hearts and so deepen our powers of empathy. Rather than reject that sobbing daughter who tells us she’s pregnant, we can embrace her. We can console a friend whose marriage is in trouble.

We can take our regrets and the pain we’ve caused and build a vehicle for compassion.

Queen, 95, returns to Royal Windsor Horse Show after a busy week of engagements in Scotland