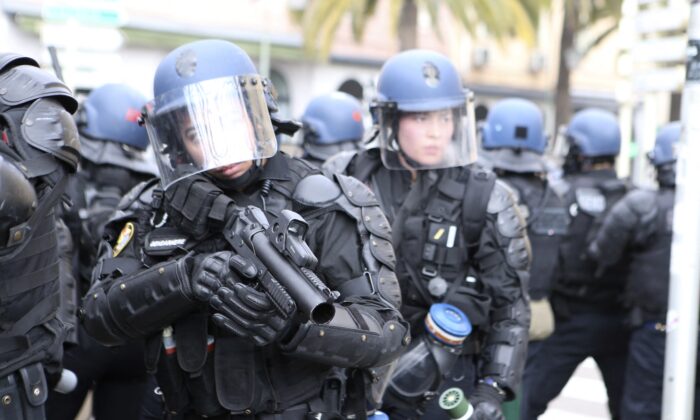 Gendarme stand with LBD guns at the city’s main square, close to the prefecture, after a protest march to support Yvan Colonna’s family after the assault of the pro-independence activist in an Arles’ prison, in Ajaccio, on the French Mediterranean island of Corsica, on March 8, 2022. (Pascal Pochard-Casablanca/AFP via Getty Images)

PARIS—The French finance and economy ministry in Paris was partially evacuated briefly on Thursday following a false bomb alert, but staff are now returning to work, a police official said.

The alert and evacuation took place while French President Emmanuel Macron was presenting his election programme to French and international reporters in another part of Paris.

“A bomb alert for the finance ministry was received and a partial evacuation ordered. Investigations have shown that it was a false alert and staff are now returning to work,” a police official said.

BFM television reported that around 20 people had been evacuated.

Ep. 51: Podcaster Sam Harris Says He Wouldn’t Care If Hunter Biden Had ‘Corpses of Children in His Basement’