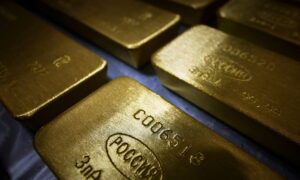 Gold prices were flat on Wednesday as hawkish comments from U.S. Federal Reserve officials bolstered the dollar and Treasury yields to multi-year highs, denting bullion’s safe-haven demand and offsetting support from uncertainty around the Ukraine war.

“Yet, the stronger U.S. dollar and lack of safe-haven demand are capping its upside potential.”

The dollar scaled its highest in nearly two years as Fed officials pushed for a quick reduction in the central bank’s bloated balance sheet, with one of them expressing openness to hefty rate increases of half a percentage point. [USD/]

The Fed will release on Wednesday minutes of its March meeting that could provide details on its plans to reduce its bond holdings.

U.S. Treasury yields hit multi-year highs, with longer-term yields moving more quickly and partly reversing some of the recent inversions in the U.S. curve. [US/]

Gold is highly sensitive to rising U.S. interest rates and higher yields, which increase the opportunity cost of holding non-yielding bullion, while boosting the dollar, in which it is priced.

Meanwhile, the United States and its allies were set on Wednesday to impose new sanctions on Moscow over civilian killings in northern Ukraine.

Will Digital World or Phunware Moon as Trump Prepares Return to Social Media?

Gen. Milley appears to defend talking to China behind President Trump’s back