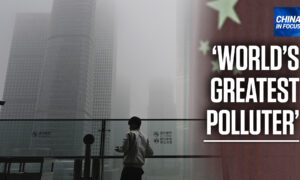 In this special episode, we sat down with Gregory Copley, president at the International Strategic Studies Association. He touches on the COP26 climate summit, the mixed messages coming out of China, and what it means going forward.

Copley said “the reality is that [Xi Jinping] did not want also to go to Glasgow because it would have called out the People’s Republic of China on their coal issues and their general pollution issues. Certainly, Beijing has improved some of its ecological operations, but the reality is that it’s still the world’s greatest polluter. And so it suited both Xi Jinping and President Joe Biden of the United States to issue this post-summit declaration of their own, which gets them back on track. And basically, it’s President Biden giving Xi Jinping another pass in this regard. The summit itself may be meaningless because it will not stop China in its commitment—necessary commitment—to coal, but it does give them some breathing space. And in any event, the People’s Republic of China has now reached peak coal. It’s now exploiting the last remnants of its reserves. So its coal production will continue to decline going forward.”

He also said Beijing is on shaky ground, “either economically or strategically. What we have seen already is that Beijing is trying to limit the return to normal economic life and growth in the outside world, particularly in the United States, but throughout the West. They want to limit the growth and, if you like, prosperity of those countries by tying them to fictional demands for climate action—which Beijing, the great offender in pollution, is not going to follow. So we see the West wringing its hands over climate when it should be saying, ‘We need to have a practical approach to how we manage natural or manmade changes in climate and pollution and environmental concerns, without destroying our economies.’”

Watch the full episode on EpochTV.