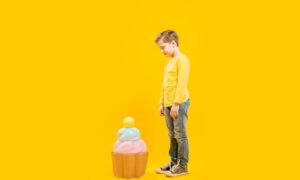 My youngest son has severe epilepsy. We’ve tried more than 50 treatments for the seizures—from mainstream anti-seizure medications to holistic remedies and integrative protocols—yet my son is of the one-third of epileptics who don’t find seizure control.

The best weeks we have with Luke are when he avoids one of his biggest seizure triggers: junk food.

School cafeterias in France apparently serve their children filet mignon and haricots verts for lunch. Yet the American public school is on a bit of a learning curve when it comes to healthy eating. Aside from a handful of schools with enlightened leadership and savvy connections to local farms, most school cafeterias still serve reheated chicken nuggets and Dominos pizza. I don’t blame them. I understand they have to make miracles happen with a budget of $2.48 per meal. Grocery stores offer one avocado for that price.

Therefore my kids bring their own lunch, carefully curated by yours truly. I try my best to give my kids nutritious food, a practice I learned over the years as a side skill from researching alternative ways to cure intractable epilepsy. It’s all about the food, and homemade lunches solve the problem of running into trigger foods at school.

However, when it comes to school birthdays and school events, there’s a potluck system of sorts, which means your child will eat whatever Junior’s parents bring for his birthday celebration. Five days out of 10, your kid is coming home with a napkin with a half-eaten, brightly colored GMO mystery “treat” on top.

Does anyone else keep quarters in the car to bribe your children from eating what’s on that dreaded napkin? (Yes, only quarters—I’m broke from spending all my money on organic food).

I’ve grown accustomed to receiving the weekly phone calls that Luke had a seizure. Recently, I dropped him off, and just one hour later I got the phone call.

My stomach caves when this happens.

The call wasn’t about Luke having a seizure that day, but the school said they couldn’t find Luke’s special goodies, which are a few boxes of honey-sweetened organic candies that I request they give to Luke whenever there’s an event, birthday, or holiday at the school. BYOT—Bring your own treats is another rule I follow. But it doesn’t always work out.

“Mrs. Giuffre,” the sweet gal in the office said apologetically, “We forgot to tell you we are having cupcakes for St. Patrick’s Day. Are those the kind that give Luke a seizure? We just wanted to give the kids a little treat.”

I usually bristle when someone calls those cupcakes a “treat.” When I was little, for any celebration, I would have been happy to receive one scratch-and-sniff sticker or a pencil with pictures of hot air balloons on them.

I replied “yes.” Luke will have a seizure if he eats one of those semi-toxic snacks. Then I thanked my lucky stars that I worked from home and had the ingredients on hand for a hot cocoa that fits all our weird food regulations. I drove back to school to drop off a real treat so my kid wouldn’t have a tonic clonic seizure.

I don’t mean to be a party pooper, but I feel like it’s not just my son who shouldn’t be eating those cupcakes. Those store-bought science projects from the grocery store bakery known in American culture as “treats” contain almost 20 grams of processed sugar per cupcake.

Processed sugar is one of Luke’s biggest seizure triggers, but it’s likely other kids are suffering from the effects of these treats as well. They contain all the allergens and food intolerances many kids have today, such as wheat, milk, eggs, and soy.

With those stats in mind, I wonder if the school policy makers understand the dangerous ingredients in those store-bought St. Patrick’s Day cupcakes: Sugar is, of course, listed first on the ingredients because it’s the most prevalent, next to enriched wheat bleached flour, partially hydrogenated vegetable oil, modified food starch and cornstarch, soy lecithin, artificial color, artificial flavor, and a manifesto of chemical ingredients like polysorbate 60—that may, just may, turn your child into the leprechaun from the 1993 horror film.

What really gets me is that many of the children in Luke’s class are medically fragile. Some of them have trach tubes and extremely special diets. Ingesting a store-bought cupcake does physiological violence to a child on a molecular level, including setting them on a blood sugar rollercoaster that contributes to the epidemic of diabetes. And yet cheap, GMO cupcakes for treats isn’t only allowed, but encouraged. There’s no real thought involved in picking the brightest cupcake container in the bakery aisle. Aside from saving a working mom some time, it’s really rather impersonal. Kids prefer freshly baked treats over store-bought any day but that isn’t the norm in our culture any longer.

Not only are healthy home-baked goods no longer normal for school events, they’re actually prohibited.

Because of safety concerns over the past decade, many school districts have adopted the “No more homemade treats at school” rule—which I guess came from the urban legend about people tampering with Halloween candy and the American obsession with germs and lawsuits. Coming home in the backpacks on the first days of school the new rule is usually stated like this one:

“ONLY STORE BOUGHT FOOD WITH AN INGREDIENTS LABEL ON THE PACKAGE will be allowed. This is regarding class parties/birthday treats/celebrations/class treats/sharing of food. Food being brought into school will still need to be pre-approved by the teacher and as always we encourage healthy snacks. ALL FOOD MUST BE INDIVIDUALLY  PRE-PACKAGED AND CANNOT BE HOMEMADE. Examples can be Rice Krispie treats, Ice pops, Little Debbie cakes etc. Also non food items are a great alternative.”

This rule needs to be changed. The American parent community was doing a fine job bringing in healthy, homemade food, not to mention our kids were able to have a taste of someone else’s cooking.

Now parents are forced to buy processed food. Instead of going into what is contained in a Little Debbie cake or a store-bought Rice Krispie treat, I would like to propose a compromise since it’s impossible (and probably insulting to suggest) that food items be banned at school functions altogether and everyone should bring pencils and stickers to the class party. May we at least bring back the homemade cupcakes (pretty please with no sugar on top).

Innovation has brought us the worldwide web of recipes. There are so many recipes to make healthy versions of our favorite store-bought treats online.

Joyce, my sons’ Waldorf preschool teacher, was legendary. My teenagers still remember their preschool years as their best years because of the incredible variety of healthy muffins Joyce brought from Johnny Crow’s Garden in Santa Cruz, California. My kids have never raved about a store-bought cupcake, but they remember those. Joyce was in her 80s and understood that food could be a cultural tradition and a way to truly honor a child.

Each birthday, the parent would be given the birthday bag—a satin purple sack containing two mini-muffin pans, descriptions of the lovely storytelling ceremony in which the parents write down a few special details about the child’s previous years, and a scrapbook of handwritten recipes passed down from parent to parent and recipes of their child’s favorite muffins or cupcakes. I remember reading through the beautiful descriptions of each family’s tradition at home. Some parents shared their cultural traditions and gave out the German “Special Plate,” and others camped in Boulder Creek each year for their child’s special day. Others included little snapshots of their child blowing out the candles on their cake.

But what really stood out to me was how creative parents were when their kids couldn’t have dairy or nuts or processed sugar. I saw muffins made with coconut oil in place of butter, cupcakes made moist by applesauce, sweetened with honey and maple syrup, and delicious fruit cakes flavored from people’s own fruit trees. Just reading the list of recipes opened my mind. When it was my turn, I was excited to bake a healthy snack for my kids’ friends, and I enjoyed writing about our own family traditions.

Between stories and recipes passed down by the book in the purple bag, and the muffins and mini cupcakes that each child had after an enriching traditional ceremony, the children had bellies full of healthy treats and soulful experiences. Maybe this isn’t ideal for public school, but some cultural norms need to change and others need to begin—out of necessity for our own bodies and sometimes out of respect for others.

Beth Giuffre is a mosaic artist and frequent contributor to The Epoch Times. When the youngest of her three sons began having seizures, she began researching the root cause of intractable epilepsy, and discovered endless approaches to healing for those who are willing and open to alternatives.