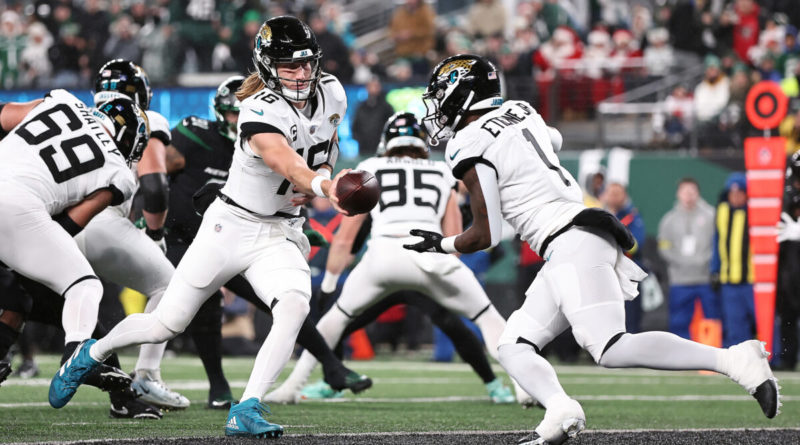 
Trevor Lawrence completed 20 of 31 passes for 229 yards and the Jacksonville Jaguars continued their late-season rise with a 19–3 victory over the New York Jets in windy and rainy conditions on Thursday night, Dec. 22, in East Rutherford, N.J.

Riley Patterson kicked four field goals and Evan Engram had seven receptions for 113 yards as Jacksonville (7–8) won its third straight game and fourth in its past five. Travis Etienne rushed for 83 yards to reach exactly 1,000 for the season and Lawrence added 51 on the ground.

New York’s Zach Wilson completed just 9 of 18 passes for 62 yards and one interception before being pulled late in the third quarter. Chris Streveler replaced him and completed 10 of 15 passes for 90 yards and rushed for 54 yards on nine attempts as the Jets (7–8) lost their fourth straight game.

Patterson’s third field goal, a 41-yarder, gave Jacksonville a 16–3 lead with 7:06 left in the third quarter.

The Jets had just three first downs when they pulled Wilson with 3:31 left in the third quarter in favor of Streveler.

Streveler provided an immediate spark with his running ability and navigated the Jets to four first downs on his initial drive. The 16-play, 83-yard excursion ended without points at the Jacksonville 12-yard line as Streveler’s fourth–and–2 pass for Garrett Wilson was incomplete with 10:24 left.

Streveler’s second drive ended after Garrett Wilson caught a pass but fumbled when Jacksonville linebacker Foyesade Oluokun accidentally dislodged the ball with his foot. Tre Herndon recovered the fumble and returned it 14 yards to the New York 23 with 4:10 left.

The takeaway led to Patterson’s 37-yard field goal to increase the lead to 16 with 3:46 remaining.

Quinnen Williams’ strip-sack of Lawrence on the third play set up Greg Zuerlein’s 37-yard field to give New York the early lead.

Jacksonville tied the game on Patterson’s 32-yard kick midway through the quarter and later moved ahead on a dominating 16-play, 96-yard drive. Lawrence lunged over the goal-line from the 1 to cap the eight-minute, 15-second drive and give the Jaguars a 10–3 lead with 11:26 left in the half.

Patterson tacked on a 45-yard field goal with 2:55 remaining in the half.

Why Are Analog Watches Always Set to 10:10 in Magazine Ads? Researchers Reveal the Subliminal Reason

Chip Shortage Has Some Carmakers Cutting Back on Safety Features: Reports