Looking back, it’s utterly bizarre how the world of science could have gone so silent even as the world locked down and lives were shattered by the billions by governments the world over. The silence was deafening. We went from a March 2, 2020, letter signed by 800 public health experts associated with Yale University—which warned against quarantines and closures—to a strange disappearance of nearly all clear voices a few weeks later. And so things stood for the better part of two years.

Governments were allowed to create vast carnage based on a novel experiment with absolutely no precedent in history and no scientific literature that backed it. Even the World Health Organization’s pandemic plan included nothing like lockdowns as a solution to a widespread pathogen. At the time, it was obvious to me and others that the silence was due not to broad agreement with the policies but to something else.

That something, sad to say, was money.

We are more and more discovering the heightened role that the crypto exchange FTX played in funneling money to major public health outposts and academics at Johns Hopkins and Stanford University, as well as its family connections to the Columbia University department of public health. And before that funding spigot opened up, there was the Gates Foundation which had clearly pivoted from seemingly nonpartisan research to full support for the lockdowns.

To be sure, there is no one explanation for the disaster. The whole profession had already been infected by the intellectual virus of mechanistic rationalism and modeling. The idea was that if you slap some math and equations together and let the computer take over, you can gain a picture of disease outcomes under various scenarios. Such models are easily manipulated with small changes in variables.

Deborah Birx relied on these entirely in her push to get the Trump administration to greenlight the lockdowns. And there can be no doubt about that history now that Trump’s Twitter account is alive again. The end of the censorship allows us to see how he was pressured to throw out his best instincts and instead adopt a lockdown policy, not just for two weeks but for months after, even to the point of criticizing Governor Brian Kemp of Georgia for opening up that Trump considered to be “too soon.”

(As an aside, the restoration of Trump’s account also allows us to see that his last two tweets urged all Jan. 6, 2021, protesters on Capitol to stay peaceful and respect the blue. It’s no wonder the ancien régime at Twitter wanted his account blocked and blasted away.)

Having studied this trajectory closely, it seems impossible to overlook the political motives here. No question that many elites in many places had whipped themselves up into a frenzy to the point that they were willing to crush the whole of society and even give up two years of education for kids in order to drive Trump from office. The plot was to get him to make the initial call himself based on telling him lies about virus severity and the effectiveness of lockdowns. No question that he was hornswoggled.

However, in addition to these factors, one cannot neglect financial factors. Quite plainly, the grant money at the time and for two years later was clearly on the side of lockdowns and the Democrat Party, plus the elite media and their narrative line that openness equals death and lockdowns/masking/mandates were public-spirited.

Vast numbers of scientists who could have and should have spoken out remained silent, or, worse, lent their voices in support of the outrage. Much of the reason has to do with how science is funded at the university level. It’s all about getting the next grant. It’s tragic but there is a strong motivation here to curate one’s opinions in a way that paves the way for future funding sources.

This is why it is not necessary that every sellout scientist be in receipt of direct funds from Gates, FTX, or the pharmaceutical industry. All that needs to happen to control a whole sector of opinion is for the word to get out on the streets that a funding source is there with countless millions and is ready to fork over.

As a result, even the smartest and most credentialled people can be easily made to fall in line. And no question that FTX quickly picked up the reputation of somehow being concerned about “pandemic planning” and so the whole of the industry lined up with their palms out. After all, FTX promised $100 million in grants!

This is why, the Washington Post reports, “The shock waves from FTX’s free fall have rippled across the public health world, where numerous leaders in pandemic-preparedness had received funds from FTX funders or were seeking donations.”

The seeking part is key here. But so is the money trail. FTX funded the later stages of the single biggest trials for repurposed therapeutics for COVID. Countless lives hung in the balance on these trials. Many physicians the world over had experienced great outcomes in dire circumstances from generic drugs such as HCQ, Ivermectin, fluvoxamine, and others, especially when used with other vitamins and zinc. Testing them was crucial.

The results were backed by a predictable media blitz: such therapeutics don’t work. Meanwhile, the study has been severely criticized not only for poor study construction but also for the conflicts of interests of top researchers who also consulted with pharmaceutical companies.

This is all very significant because there is a strong sense that the reason for the neglect of therapeutics—by the National Institutes of Health, Gates Foundation, and also major media, which smeared anyone who suggested there might be a better way—might all trace to the economic motive of shutting down cheap alternatives to vaccines.

Independent journalist Alexandros Marinos has mapped out the timeline of the study: 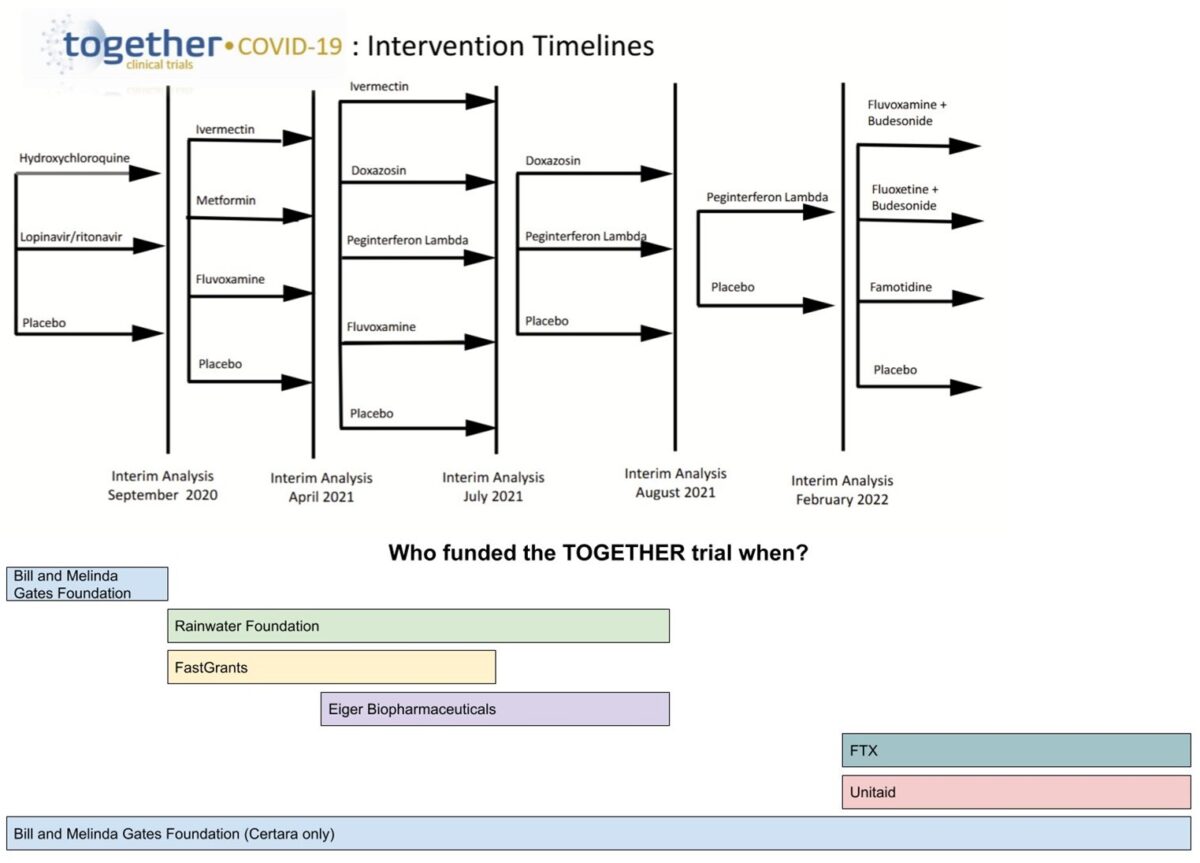 The Gates Foundation was first in, followed by Rainwater and FastGrants. FastGrants is a program established by the Charles G. Koch Foundation that also ended up giving money to Imperial College modeler Neil Ferguson, who first drove lockdown propaganda in the UK and United States. FTX modeled its own grant-giving program on FastGrants and then picked up the funding burden later in the process. (There is supreme irony here: the lie all over the internet was that the Great Barrington Declaration was funded by Koch, whereas in fact that money stream was going to the opposition!)

In addition, the Post notes, FTX “awarded $1.5 million to Stanford University’s Center for Innovation in Global Health in July for seed grants intended ‘to catalyze research and innovations that prepare for and help prevent the next pandemic.’”

Also: “The Future Fund’s commitments included $10 million to HelixNano, a biotech start-up seeking to develop a next-generation coronavirus vaccine; $250,000 to a University of Ottawa scientist researching how to eradicate viruses from plastic surfaces; and $175,000 to support a recent law school graduate’s job at the Johns Hopkins Center for Health Security.”

We don’t know how much money Gates/FTX gave to JHU’s Center for Health Security (which had sponsored Event 201) but it was enough to cause the Center’s head Tom Inglesby to completely reverse his earlier position against lockdowns to become a leading champion of them.

“Overall, the [FTX] Future Fund was a force for good,” Inglesby told the Post. “The work they were doing was really trying to get people to think long-term … to build pandemic preparedness, to diminish the risks of biological threats.”

Following the money trail from FTX to the public health establishment will undoubtedly reveal more in the way of information, especially considering that Sam Bankman-Fried’s brother Gabe ran a lobbying organization entirely devoted to “pandemic planning.”

No question that this whole machine became an industrial behemoth over two years. When I first started Brownstone Institute, my phone and email began to blow up with offers of money and funding, but always with a proviso. I had to connect our scientists with their network of scientists in an already established system.

There was no question in my mind what was going on: I was being told to play ball in exchange for large checks to make this fledgling nonprofit work. In some way, this astonished me: I was being offered a path to riches provided I would gut the whole mission! And this was happening even before we had published any of our research!

So, yes, I saw how this system works firsthand. Of course I completely rejected the idea simply because going along would defeat the whole point of founding an institute in the first place. And yet the presumption on the part of the contacts was that surely this was just another racket in a space full of them and I would be happy to give up all principles for generous funding. I never considered it even for one instant.

There is a grotesque tragedy to all of this. Great people gave up all their principles and integrity in exchange for grants and grease from big shots who used their money and power to wreck the world over two years, and they were able to do it with very little professional opposition. And yet here we are today. Who are the real stars in the world of science today? Not those on the Gates/FTX gravy train. It is the men and women who stuck their necks out to do the right thing.

John Coykendall Is Saving the Seeds of the Past, for the Future

“A Golden Opportunity to Rebuild Something Substantial” but Australia Must Prove Itself: French Ambassador

Thanksgiving Travel Bouncing Back in a Big Way: AAA