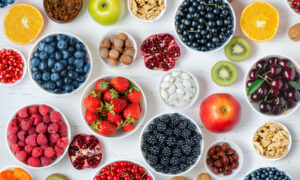 There is accumulating evidence that brain-derived neurotrophic factor (BDNF) may be playing a role in human depression. BDNF controls the growth of new nerve cells, and “so, low levels [may explain the] atrophy of specific brain areas… [you see] among depressed patients.” That may be one of the reasons exercise is so good for our brains. Start an hour-a-day exercise regimen, and within three months you can get a quadrupling of BDNF release from your brain.

This makes sense. Any time we were desperate to catch prey or desperate not to become prey ourselves, we needed to be cognitively sharp. And so, when we’re fasting or exercising and in a negative calorie balance, our brain starts churning out BDNF to make sure we’re firing on all cylinders. So, of course Big Pharma is eager to create drugs to mimic this effect, but is there any way to boost BDNF naturally? Yes, I just said it—fasting and exercise! Okay, okay; but is there anything we can add to our diet to boost BDNF?

Well, higher intakes of dietary flavonoids appear to be protectively associated with symptoms of depression. The Harvard Nurses’ Study followed tens of thousands of women for years, and found that those who were eating the most appeared to reduce their risk of coming down with depression. Flavonoids occur naturally in plants, and so there’s a substantial amount in a variety of healthy foods. But wait…how do we know the benefits are from the flavonoids, and not just from eating healthier in general? You don’t know until you put it to the test.

A teaspoon a day of the spice turmeric may boost BDNF levels more than 50 percent within a month, consistent with the other randomized controlled trials that have so far been done.

Nuts may help too. In the PREDIMED study where people were randomized to be sent weekly batches of nuts or extra virgin olive oil, the nut group lowered their risk of having low BDNF levels by 78 percent.

And brain-derived neurotrophic factor is not just implicated in depression but schizophrenia as well. Have those with schizophrenia undergo a 12-week exercise program, and they get a significant boost in BDNF levels––leading the researchers to suggest “that exercise induced modulation of BDNF may play an important role in developing non-pharmacological treatment for chronic schizophreni[a] patients.” Okay, but what actually happened to their schizophrenia symptoms? Let’s find out.

Thirty individuals with schizophrenia randomized to ramp up to 40 minutes of aerobic exercise three times a week or not. And there did appear to be an improvement in psychiatric symptoms such as hallucinations, as well as increasing their quality of life. In fact, you can actually visualize what happened in their brains. Loss of brain volume in a certain region appears to be a feature of schizophrenia, but 30 minutes of exercise three times a week, and you can get up to a 20 percent increase in size of that region within three months.

Calorie restriction may also increase BDNF levels in schizophrenics, but they didn’t just have them eat less, but eat healthier—less saturated fat and sugar, and more fruits and veggies. It’s like the Soviet fasting trials for schizophrenia. They reported these truly unbelievable results, supposedly restoring people to function: fasting described as an “unparalleled achievement in the treatment of schizophrenia.” Okay, but part of the problem is that the diagnostic system the Soviets used is completely different, making any results hard to interpret. But they do have a subgroup that does seem to correspond to the Western definition, and they still report between 40 and 60 percent improvement rates from fasting.

But that’s not all they did. After being fasted for up to a month, they were put on a meat- and egg-free diet, so when they report these remarkable effects even years later, that’s for those who stuck with the diet. Those who broke the diet evidently relapsed, and the closer the diet was followed, the better the effect. They note that “not all patients [were able to] remain vegetarian,” but they tried to keep meat to a minimum. And look, we know from randomized controlled trials that just removing meat and eggs can improve mental states within even just two weeks, and so it’s hard to know what role the fasting itself played in the reported improvements.

A single high-fat meal can drop BDNF levels within hours. And you can prove it’s the fat itself by seeing the same thing injecting fat straight into their veins. Perhaps that helps explain why increased consumption of saturated fats in a high-fat diet may contribute to brain dysfunction—neurodegenerative diseases, long-term memory loss, cognitive impairment. Maybe that helps explain why the standard American diet has been linked to a higher risk of depression, dietary factors modulating the levels of brain-derived neurotrophic factor.

This story was originally published on the NutritionFacts.org Blog.