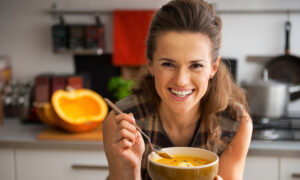 Our gut flora is determined by what we eat, for good or for ill.

When we eat meat, dairy, eggs, and seafood, our gut flora can take certain components in them (carnitine and choline) and produce something that ends up as a toxic compound called TMAO, which may set us up for a heart attack, stroke, and death.

So, give people two eggs, and you get a spike of TMAO in their bloodstream within hours of consumption. Because gut bacteria play a critical role in this process, though, if you then give them a week of antibiotics to wipe out their gut flora, and re-feed them two more eggs, nothing happens. No TMAO in their bloodstream because they have no egg-eating bacteria to make it. But give it a month for their gut bacteria to start to grow back, and the eggs start to cause TMAO production once again.

It’s the same thing with meat. Give people the equivalent of an 11-ounce steak, and TMAO levels shoot up in the blood. But feed them the same amount after a week of antibiotics, and nothing happens. So, to run into problems, you need both the meat and the meat-eating bugs. That’s why you can feed a vegan a sirloin, and they don’t produce TMAO within their body. They just don’t have the meat-eating bugs in their gut.

Okay, now this should all be old news for those who have been following the science. The reason for this video is to show that this phenomenon happens the other way around too. When we eat whole plant foods, like fruits, vegetables, whole grains, and beans, along with nuts and seeds, our gut flora can take certain components in them (fiber and resistant starch) and produce short-chain fatty acids, which can set us up for the prevention of human diseases. Short-chain fatty acids, like butyrate, can help seal up a leaky gut, fight inflammation, prevent weight gain, improve insulin sensitivity, accelerate weight loss, and fight cancer.

Check this out. If you give people whole intact grains––in this case barley kernels, also known as barley groats (three servings a day, like I recommend in my daily dozen app)––within just three days of eating that extra 30+ grams of fiber and resistant starch, their gut bugs were so happy and produced so many short-chain fatty acids that people’s insulin levels improved by 25 percent, which means their bodies needed to produce less insulin to take care of the same amount of white bread, while still dampening the blood sugar spike. But this was on average.

Some people responded to all that extra fiber with beautiful dips in blood sugar and insulin responses, but in others, the same amount of fiber and resistant starch didn’t work at all. Why? Because you don’t just need fiber, but fiber-feeding bugs like Prevotella. How do you get more Prevotella so you can take full advantage of the health benefits of plants? Eat more plants. Prevotella abundance is associated with long-term fiber intake.

If you look at rural African children eating 97 percent whole food, plant-based diets, their Prevotella is off the charts compared to kids eating standard Western diets, and this is reflected in the amount of short-chain fatty acids they are churning out in their poop.

In the industrialized world, it’s those habitually eating vegetarian and vegan that promotes the enrichment of ﬁber-eating bacteria in the gut. Here’s the relative Prevotella abundance between those who eat meat, no meat, or all plants.

This may help explain the worse inflammatory profile in omnivores than in vegetarians. Based on the findings relative to bacteria abundance, the researchers “suggest that exposure to animal foods may favor an intestinal environment which could trigger systemic inflammation and insulin resistance-dependent metabolic disorders” such as type 2 diabetes. And it’s the reduced levels of inflammation that may be the key factor linking a plant-based gut microbiota with protective health benefits. Yeah, but can’t meat-eaters eat lots of plants too? Omnivores have “constraints on diet-dependent gut microbiota metabolite production.” In other words, it’s the flipside of the vegan eating a steak. They can eat all the fiber they want, but may be lacking in fiber-munching machinery.

At low levels of fiber intake, the more you eat, the more of the beneficial short-chain fatty acids are made. But at a certain point, your available fiber-feeders are maxed out, and there’s only so much you can benefit. But those habitually eating a plant-based diet have been cultivating the growth of these fiber-feeders, and the sky’s the limit––unless, of course, you’re eating vegan junk. But a whole food, plant-based diet should be “effective in promoting a diverse ecosystem of beneﬁcial bacteria to support both our gut microbiome and overall health.”