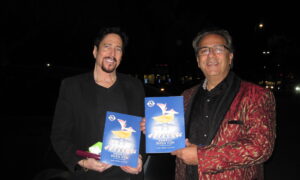 ESCONDIDO, Calif.—With the ongoing pandemic, many people may feel that coming out to experience Shen Yun Performing Arts is a risk to their well-being. But Alan Platte, a CFO of a health care business and his friend Richard Hart, instead found that it’s better to bask in the beauty that a live performance can provide rather than stay home in fear.

“It wasn’t just my soul, it was my whole body-soul experience. So I’m just in awe! I want to see this show again, and will keep coming back every single year,” Hart said.

Platte additionally gave some enthusiastic advice to others about seeing Shen Yun.

“Do not be concerned, vaxxed or unvaxxed, it does not matter, we have to live with this virus. So you cannot just cocoon yourself in your house and get depressed. Come out!” Platte said.

Coming to a beautiful show like this, I’m sure the Creator is taking care of us!

“Now is the time to enjoy your life and come and see these beauties. Life is a risk. Driving a car is a risk. But coming to a beautiful show like this, I’m sure the Creator is taking care of us!” he said.

“It was a safe environment for everybody to come see the show. I don’t think anybody should have any concerns about that.”

Hart shared that he has been wanting to see New York-based Shen Yun since the company was founded and he finally had the opportunity to invite his friends and family.

I invited all my friends, all my family, anybody that I love, to this amazing show.

“It’s been a dream of mine to see Shen Yun since 2006, and finally I realized this dream after so many years. I had to buy 14 tickets, VIPs, and I invited all my friends, all my family, anybody that I love, to this amazing show,” he said.

Shen Yun always strives to give beauty to its audience through the goal of presenting China as it was before communism.

“I can tell you this much—if you want to see beauty in humanity, and how our creator created such an amazing thing, you don’t want to miss Shen Yun! You want to come and take a look at Shen Yun,” Hart said. “It’s the most amazing thing! I love it!”

He added that Shen Yun really presented to the audience what matters most.

“Spirituality is all we have. I’m a believer and I’m a believer that [the] Creator created us. And this Creator is awesome because he created us in his image. What happened on this stage tonight is exactly that. I saw creators creating beauty, dance,” he said.

Hart shared his respect for the production and gave Shen Yun his wholehearted recommendation.

“It moves you. It moves your energy, it moves your soul. It moved me to my core. It really did. Everyone did such an amazing job, everybody performed to their best. If you want to see [the] best, you want to come to Shen Yun,” he said.

Renault Production May Get Affected by Supply Chain Issues in Russia

LDN Could Be Promising for Long COVID and Spike Induced Injuries