Stimulating acupuncture points can improve or cure diseases. In the West, acupuncture and acupressure are gradually gaining popularity. However, do meridians really exist in the human body? The scientific community has long had no answer. However, a study published by Harvard Medical School confirmed the existence of the “pericardium meridian,” one of the 12 meridians.

In January 2022, a 28-year-old man came to the clinic of Professor Jonathan Liu, registered acupuncturist.

This young man and his entire family had always been Professor Liu’s patients. He used to have a lot of energy and loved rock climbing. Not long ago, he contracted COVID-19. It started with a fever, coughs, and a sore throat. After he spent a while resting, most of his respiratory symptoms subsided. However, he was left with the sequelae of chest congestion and fluttering heartbeats (palpitations). When he exercised, his palpitations became more obvious.

The heart discomforts made it difficult for him rock climb as much as before, and he was very distressed.

Why were his heart problems cured by acupuncturing his pericardium meridian?

The word pericardium is derived from the Latin words “around (peri)” and “heart (cardium).” As its name implies, pericardium is the membrane enclosing the heart. It is the guard that protects the heart. And “meridian” can be interpreted as a “channel of energy.”

Usually, our emotional ups and downs will cause the energy in the body to fluctuate strongly, thus damaging the heart. Therefore, people who are emotionally unstable and often stress tend to have unhealthy hearts. The negative energy of the SARS-COV-2 virus will also damage the heart after infection. In particular, many people have post-COVID-19 symptoms (long COVID) often still have residual viruses in their body, and their energy continues to attack the heart.

According to traditional Chinese medicine, the “heart” doesn’t refer to only the heart itself, but also the person’s state of mind. Therefore, besides treating chest congestion, palpitations, and angina, the pericardium meridian can also improve mental tension and insomnia.

A Harvard Study Confirms the Existence of Pericardium Meridian

Traditional Chinese medicine places great importance on the meridians, and many concepts of healing are closely related to them. However, the meridians are invisible to the naked eye, so conventional Western medicine still holds reservations about their existence.

However, in March 2021, a paper published in the medical journal Evidence-Based Complementary and Alternative Medicine, a collaboration between Harvard Medical School and the Institute of Acupuncture and Moxibustion of the China Academy of Chinese Medical Sciences (CACMS), observed the possibility of the pericardium meridian’s existence for the first time.

The pericardium meridian is one of the “12 meridians.” It starts in the chest, follows the midline of the forearm, travels to the palm of the hand, and ends at the tip of the middle finger. It has nine acupoints: Tianchi, Tianquan, Quze, Ximen, Jianshi, Neiguan, Daling, Laogong and Zhongchong (from PC-1 to PC-9).

In the study, 15 healthy volunteers were recruited, and two Chinese physicians marked the pathways and acupuncture points of the pericardium meridian on their hands and arms and used a low resistance detector for further confirmation. Afterwards, they injected fluorescein into the volunteers’ pericardium meridians and observed the direction of the fluorescein’s movement with a special camera.

It was emphasized in the study that the fluorescein was injected intradermally, not subcutaneously, intramuscularly, or intravenously, to ensure that it would not disperse into the blood vessels.

The scientists were surprised to find that after the volunteers were injected with fluorescein in the Neiguan (PC-6) point on their wrists, over time, fluorescent lines appeared on most of their arms. These “glowing lines” spread along their arms, all the way to the bend of their elbows. The path of this line is precisely the path of the pericardium meridian.

In other words, starting at the Neiguan (PC-6) Point, the fluorescein follows the pericardium meridian all the way to the Quze (PC-3) Point 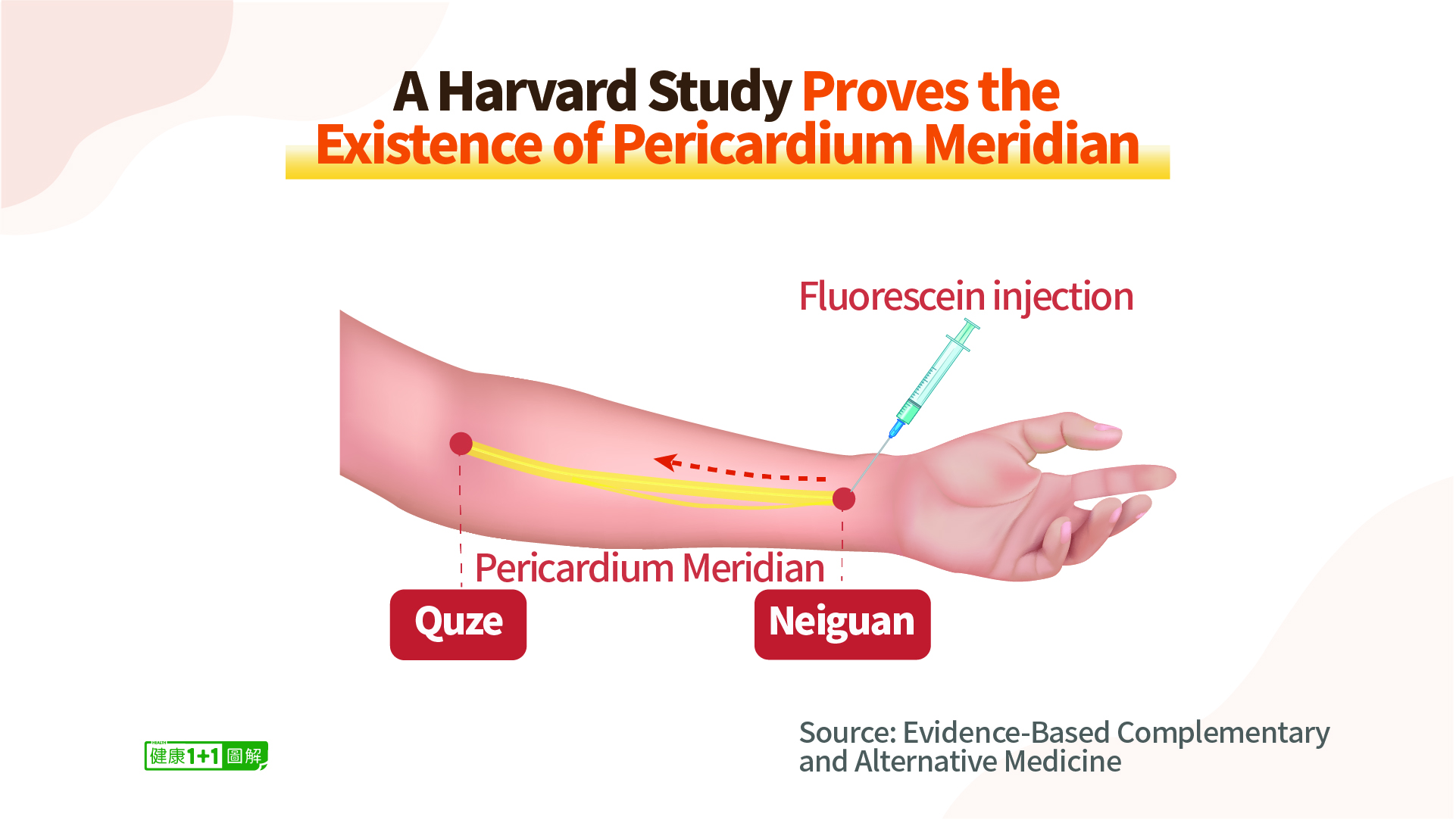 In addition to the Neiguan (PC-6) Point, the researchers also injected fluorescein into one volunteer’s Jianshi (PC-5) Point, and a fluorescent line also appeared. In some cases, the lines extended all the way to the upper arm. This phenomenon lasted for 18 hours before the lines slowly disappeared.

Scientists Injected Fluorescein Outside the Acupuncture Points, and No ‘Fluorescent Line’ Appeared

In order to confirm whether similar linear traces would appear if fluorescein was injected at any point on the hand, the researchers designed a control study in which fluorescein was injected at a point one centimeter away from the Neiguan (PC-6) acupuncture point (a non-acupuncture point injection). This experiment was performed seven times, and none of the experiments generated similar lines. 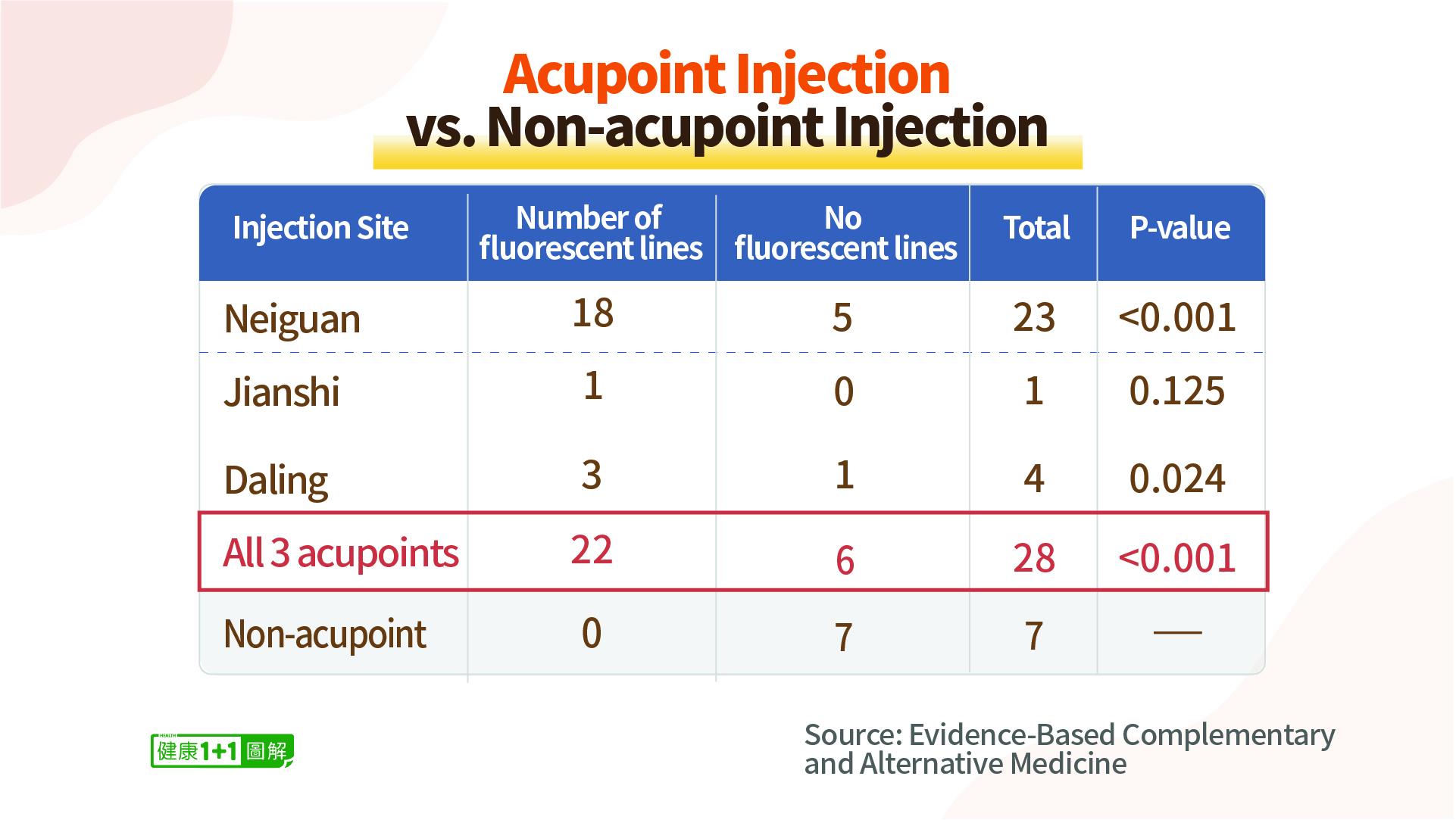 Overall, 22 of the 28 injections showed lines. Compared with the non-acupuncture point injections, the statistical p-value of the acupuncture point injection experiments was less than 0.001, which means that the existence of the pericardium meridian is clearly possible and not just a figment of the ancients’ imagination (in general, a p-value of less than 0.05 is statistically significant).

Massaging Acupoints on the Pericardium Meridian to Improve Palpitations and Insomnia

So, specifically, how does one use the pericardium meridian to treat diseases?

We can perform acupressure: press each point 100 times, twice or three times a day (e.g. once in the morning and once in the evening). You can use your thumb to rub the points directly, or you can use a massage device to produce a slight soreness and swelling at the points. The following are the three major pericardium meridian points to massage.

If you have palpitations, irregular heartbeat, a sudden myocardial infarction and other heart problems, massaging the Neiguan (PC-6) Point can help relieve the symptoms. 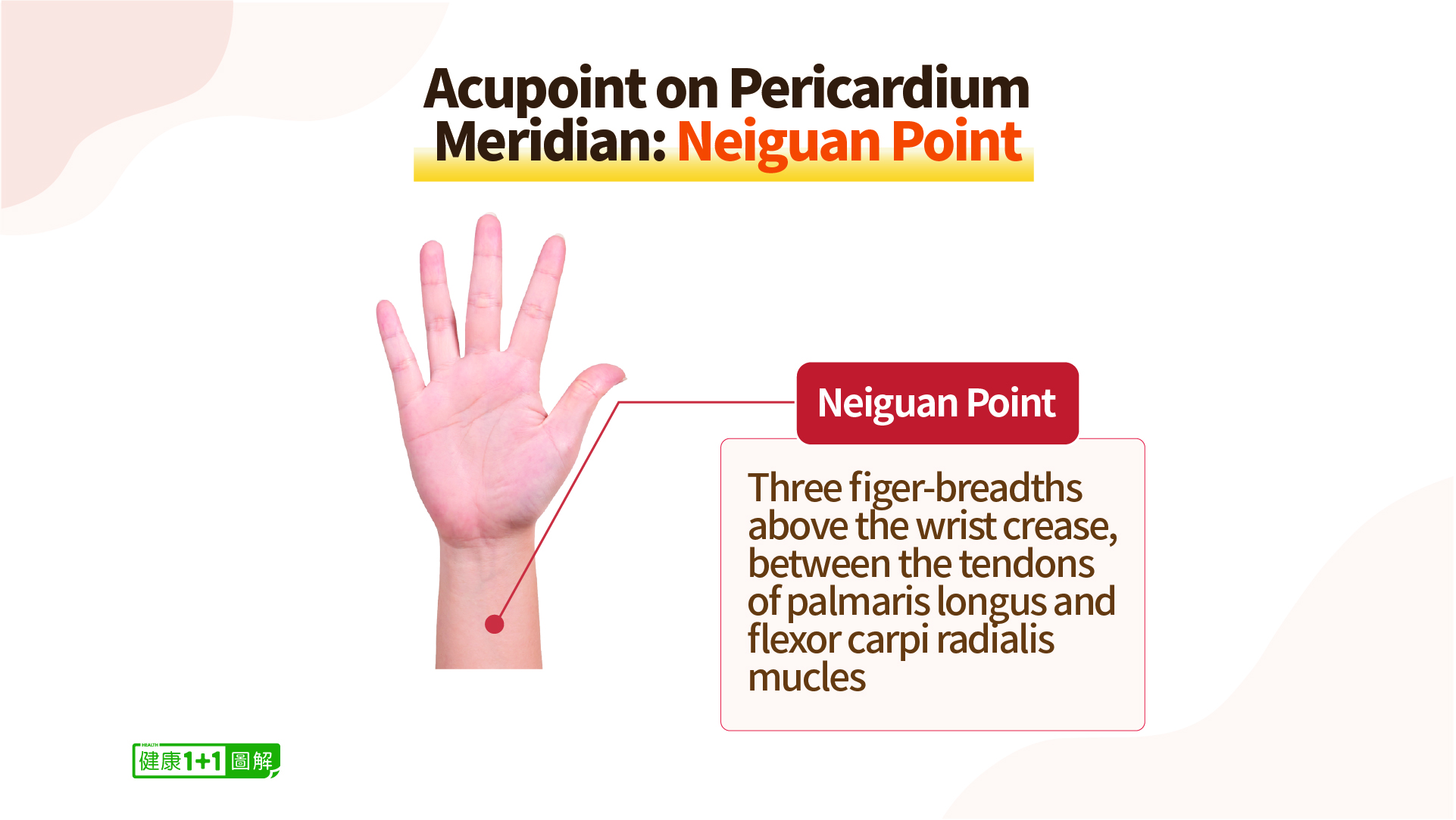 The Neiguan (PC-6) Point is a major point that not only treats heart problems, but also improves insomnia. 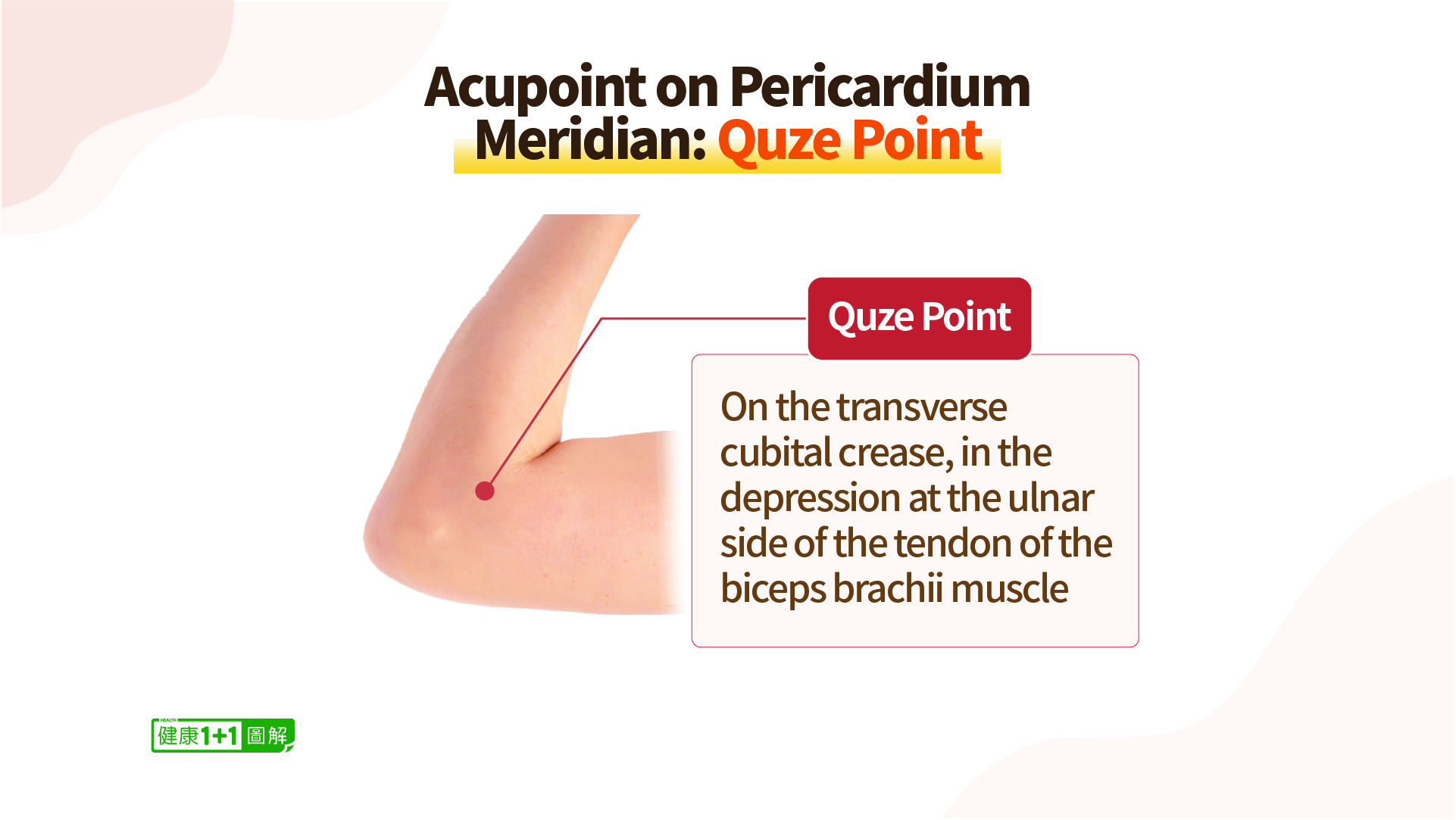 The Daling (PC-7) point is a Shu-Stream acupoint of the pericardium meridian and can treat many pains, such as chest and underarm pains, arm pain, and elbow pain. It is also an acupuncture point that emphasizes reducing, and it can clear heart and liver “fire” energies. Therefore, when you are angry or upset, you can press the Daling Point to relieve your anger. 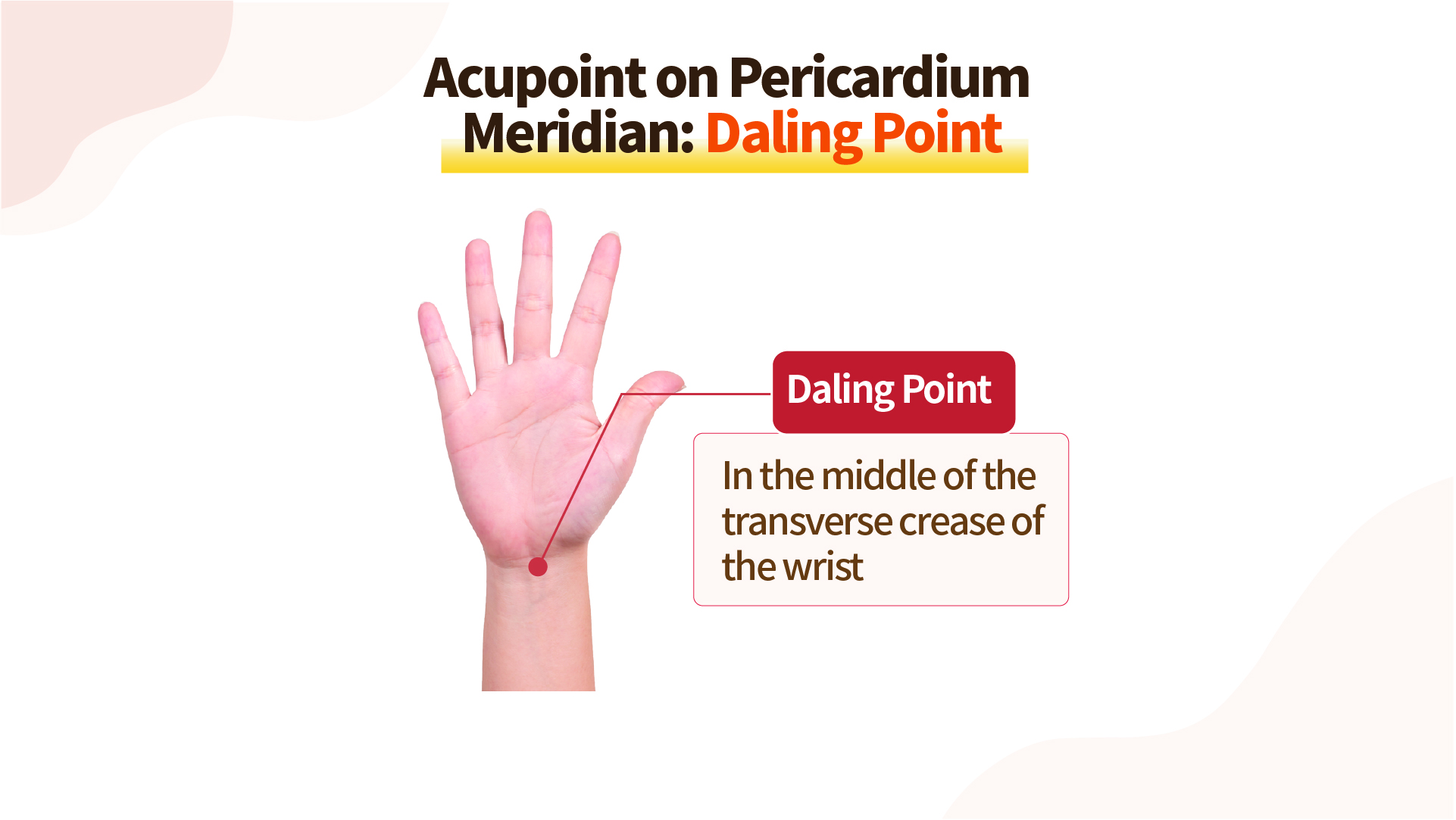 Epoch Health articles are for informational purposes and are not a substitute for individualized medical advice. Please consult a trusted professional for personal medical advice, diagnoses, and treatment. Have a question? Email us at AskADoctor@epochtimes.nyc

Dying Patients With Rare Diseases Struggle to Get Experimental Therapies