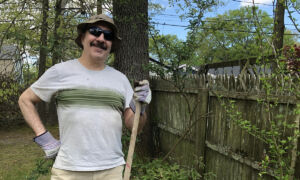 When it comes to gardening, I’m a blooming idiot. But that hasn’t stopped my wife, Sue, from enlisting my sorry services in planting vegetables, transplanting plants and making the flower beds comfy because, as I told her when we went to the landfill for some free topsoil, I work dirt cheap.

As I also told her, there’s no tool like an old tool. Which explains why, in a pathetic attempt to assist in the beautification of our little piece of earth, I was hit in the head by my own rake.

It happened when I dug a hole with a shovel, another dangerous implement whose main goal in life is to wrench my back, so I could plant a peony I bought for Sue, not realizing she would make me stick it in the ground.

This entailed using an iron rake to smooth out the area that would become the peony’s home. Or, rather, its temporary home. (More on this in a moment.)

The rake and the shovel must have been in cahoots because, as soon as I dug the hole, I put down the shovel and promptly stepped on the teeth of the rake, which immediately rose up to club me on the cranium.

It’s a good thing it didn’t smash my teeth, in which case I’d be dealing with roots of another kind. It’s also a wonder, considering the thickness of my skull, that the rake didn’t break, which not only was a distinct possibility but also, I told Sue, rhymes.

Naturally, she was very concerned.

It survived the trauma nicely and was ready for more dirty work. But first, Sue and I went to the landfill for the aforementioned topsoil.

We hadn’t been to the odoriferous facility in a couple of years, when I took my lovely bride there for our most memorable wedding anniversary.

“This place is a real dump,” I told her.

No one can say I’m not a hopeless romantic.

This time, I brought lawn and garden bags to fill with rich, dark chocolate. Sorry, I mean soil.

When we got back to home, sweet home, I dumped the topsoil into Sue’s vegetable garden, which was pretty seedy and needed new seeds, and smoothed it out with the rake, taking extreme caution against another physical attack.

Usually, our yard runs the botanical gamut from A (azaleas) to Z (zucchini), but this year, Sue isn’t planting the latter, which is fine with me because the only thing I would find less appetizing is poison ivy, which I’m not itching to try.

“I hope this doesn’t squash your enthusiasm,” I told Sue, who looked like she was ready to throw in the trowel.

Instead, she used it to plant herbs on the right side of the garden, hot peppers in the middle and tomatoes on the left, along with string beans and a hyacinth bulb.

“The jalapeño and cayenne peppers will blow your brains out,” said Sue, who loves them because she’s hot stuff herself.

“They couldn’t do that to me,” I replied, not even bothering to elaborate. Sue agreed anyway.

Then it was time to plant flowers, notably azaleas and peonies, for which I had to dig holes around the perimeter of the property so Sue could put them in the ground and bring them to dazzlingly colorful life.

“They’ll do well with proper watering,” said Sue, adding that it should be done from underneath, not overhead.

“What do you think happens when it rains?” I asked.

She also said the peony I helped plant in front, where I had the tool mishap, needed to be transplanted to the back.

“Did it tell you?” I wondered.

“Yes,” Sue said, implying that she has more intelligent conversations with plants than she does with me.

So now I have to do more dirty work to make the peony happy. I hope the rake doesn’t hit me in the head again.

Jerry Zezima writes a humor column for Tribune News Service and is the author of six books. His latest is “One for the Ageless: How to Stay Young and Immature Even If You’re Really Old.” Email: JerryZ111@optonline.net. Blog: jerryzezima.blogspot.com.

Bob Goalby, Who Won Masters After Scorecard Flub, Dies at 92