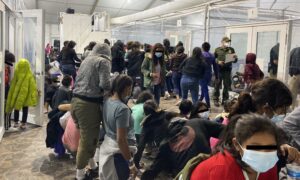 A total of 16,513 unaccompanied illegal alien minors were in the custody of either Customs and Border Protection (CBP) or the Department of Health and Human Services (HHS) as of March 23, according to the HHS Administration for Children and Families.

CBP had custody of 4,962 minors and 11,551 were in the hands of the HHS. The administration of President Joe Biden has committed to releasing a daily tally of the unaccompanied minors in custody amid growing pressure for transparency amid an escalating crisis on the southern border.

CBP apprehends minors who cross the border illegally and holds them in custody until they are processed for transfer to HHS. HHS holds the minors until they are placed with a family member in the United States.

The Biden administration practice is different from the one under former President Donald Trump, when immigration authorities sent unaccompanied minors back to their home countries. Republicans say Biden’s decision to release minors into the United States is serving as a magnet for more illegal aliens to make the trek and cross the southern border illegally.

“These children are reunited with their families who will care for them. The children then go through immigration proceedings where they are able to present an application for asylum or other protection under the law,” a statement from ACF reads. “The administration is monitoring the border and marshaling all corners of the government to find compassionate and fair solutions.”

The White House is under increasing pressure to address the influx of unaccompanied minors. Biden on Wednesday tapped Vice President Kamala Harris to handle the border crisis.

Early in his term, Biden issued an exemption on Title 42 deportations for unaccompanied minors. The Trump administration had used Title 42 authority to send back illegal aliens, due to concerns over the spread of the CCP (Chinese Communist Party) virus, commonly known as the novel coronavirus.

Sen. Lindsey Graham (R-S.C.) introduced a bill on March 24 that would require asylum-seekers from the Northern Triangle countries—Guatemala, Honduras, and El Salvador—to apply for refugee status at asylum centers outside the United States. The proposal would also afford equal treatment to unaccompanied minors from the Northern Triangle as those from Canada and Mexico. Under the current law, unaccompanied minors from Mexico and Canada are returned to their home countries.