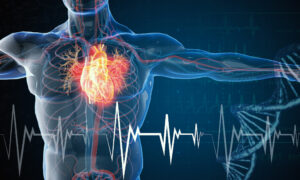 Numerical scores are used in a variety of ways ranging from sports to scholarly exams to credit worthiness. Now there’s another score, one that can help in the prevention of heart disease, the leading cause of death in the U.S. According to the Centers for Disease Control and Prevention, someone dies from heart disease every 34 seconds.

However, a relatively new type of screening, known as the coronary calcium scan or heart scan, can help predict the likelihood of a heart attack by identifying the amount of calcified plaque in the coronary arteries.

Though the procedure is considered relatively new, it’s actually a type of CT (Computerized Tomography) scan. A numerical score is assigned to the results with zero serving as the lowest, indicating very low risk. The higher the number, the greater the risk.

Unlike many other medical tests, it does not require fasting, needle pricks, or medication beforehand. Contrast dye is not required. It’s also a quick procedure, taking only about five or less minutes, said Dr. Basera Sabharwal, chief fellow of cardiovascular disease at Mount Sinai Morningside.

“Cardiac calcium scoring is a great test because with age, calcium starts to get deposited wherever you have the plaque,” she explained. “It’s a marker that can tell us if you have plaque or not.”

It’s little wonder then, that it’s becoming more commonplace as a means of routine screening. As more cardiologists and their patients are learning of its usefulness, “it’s becoming more and more popular,” Sabharwal said.

Though she also emphasized a coronary calcium scan can’t replace other screening tests such as those recommended by the American Heart Association that measure lipoproteins, blood pressure, blood glucose, or body weight, a calcium coronary scan can help identify patients who would otherwise be considered low risk for a heart attack or other problems.

In a study, Johns Hopkins Medicine found the scans of about 15 percent of what had been considered low-risk patients actually had high coronary artery calcium scores above 100 and were at relatively high risk of a cardiac event over the next seven years. Likewise, about 35 percent, who were previously assessed as high risk, were found to have no calcium buildup.

If a patient scores high, Sabharwal said the result may warrant medical and lifestyle interventions. “Even if you feel great, it means the process has already started,” she said of the high scores. “So now is the time to control the LDL (also known as ‘bad cholesterol’) and get it down as low as you can.”

Despite being a test that measures calcified plaque, Sabbharwal said cholesterol figures into the risk. She used a kitchen analogy to explain it, likening LDL cholesterol to “grease” and the coronary artery to a “pipe.” When grease is repeatedly poured down the pipe, it hardens, builds up, and narrows the pipe’s passageway.

She said patients with high scores are urged to make dietary changes to reduce LDL and may also be treated with medication. “Down the road it is just going to keep getting worse unless the patient controls their LDL level,” she said.

If there is a downside to the test, it’s that the scan is, by and large, not covered by insurance—at least, not yet. Sabbharwal expects this to change as the scan is more widely used. “As it’s being used more often, soon it will be [covered],” she said. Pricing without insurance varies but a recent query resulted in pricing between $75 in Texas and $105 in New York City, though there may be even greater variances depending on the facility and location.

The test, said Sabbharwal, is particularly valuable for older people. “It’s very rare for people under the age of 50 to start building plaque,” she said. The National Heart, Lung, and Blood Institute broke down the recommendations a bit more specifically.

Their guidance dictates a younger age, 42, for men and a later age, 58, for women. People with diabetes, however, should be scanned at an earlier age as it’s believed calcium deposits begin accumulating about six years earlier than in people without diabetes. With that in mind, it’s recommended men with diabetes get scans at age 37 and women with diabetes at age 50.

Likewise, people who have smoked, have high blood pressure, high cholesterol, or a family history of heart disease will show signs of calcification about four years earlier than people without these risks. So they, too, should be scanned at an earlier age.

“By treating them,” she said of the patients with high scores, “you can really prevent disease in the long run.”