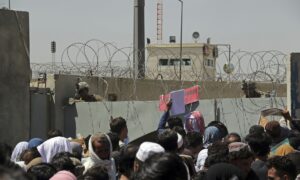 Officials say they expect more attacks in Kabul after 180 were killed, a former Afghan interpreter says concerned for his family’s safety as the Taliban reportedly goes door to door, and 1,700 white vases line the grass of Pennsylvania’s Independence Hall to honor lives lost to gun violence.

Kamala Harris slammed by Rep. Lauren Boebert for her refusal to visit the border