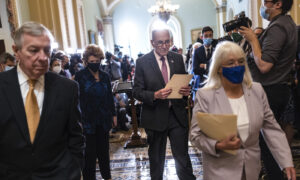 Senators vote to raise the debt limit temporarily, and prevent the government from defaulting. What’s next? And are they just kicking the can down the road? Analysis shows President Joe Biden’s child tax credit will benefit blue state families more than red state families. That’s because it’s calculated based on different child care costs and the median income in each state. The House holds a hearing on the Arizona election audit. And Republican Representative from Arizona says they do not know who won the 2020 presidential election. He says though the recount numbers are similar, the audit showed there were a lot of issues with the election.

Dr. Marik: Doctors are targeted for prescribing off label meds for COVID-19

Crypto Miners’ Electricity Use in Texas Would Equal Another Houston

So Long, Fauci — Stepping Down Before Red Wave