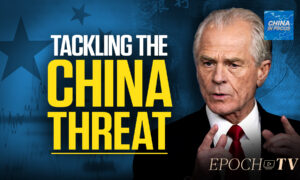 In this special episode, we sat down with Peter Navarro, former trade adviser at the White House and author of “Taking Back Trump’s America.” He sheds light on in which ways the Trump administration could have been tougher on China, what steps America needs to take now in dealing with the China threat, and more.

Navarro said, “The failure to get as tough on communist China as we could and should have, I think, was the single biggest of the strategic failures.”

He said one of the biggest concerns now when it comes to the Chinese regime is “communist China’s initiative to make the renminbi, yuan, call it whatever you want, the reserve currency of the world, and to the extent they force, cajole, or induce others in their axis of mercantilist evil into adopting the Chinese currency.”

As for dealing with a communist regime, Navarro drew upon his own experience.

He said: “I spent four years in the Trump White House fighting communist China, and I can’t think of a single instance where they kept their word. They’re just liars and cheaters.”

“And they want to destroy this country,” he added.

Have other topics you want us to cover? Drop us a line: chinainfocus@ntd.com

Queen praises England’s ‘spirit, commitment and pride’ as she calls on them to win Euro 2020 final