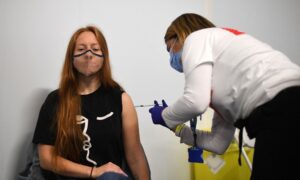 Israel’s top officials on Saturday warned that Pfizer’s COVID-19 vaccine is “significantly less” effective at combating the “Delta” variant of the CCP virus.

“We do not know exactly to what degree the vaccine helps, but it is significantly less,” Israeli Prime Minister Naftali Bennett told reporters and cabinet members on Saturday. He did not provide more details.

The Delta strain, which was first identified in India, now makes up a significant portion of the COVID-19 cases in the United States and the United Kingdom, according to health officials.

Bennett added that in “Britain, in recent days, we have seen a jump in the number of children who are being hospitalized on a daily basis.” He added, “This is a development that we are aware of; we are dealing with it rationally and responsibly.”

For months now, Israel has relied heavily on administering Pfizer’s COVID-19 vaccine, which uses mRNA technology. Officials have said that more than 5.7 million Israelis have received at least one dose of the vaccine.

The Epoch Times has contacted Pfizer for comment regarding Bennett’s claims.

The Delta variant, meanwhile, has prompted concerns that governments around the world would reimpose strict lockdowns or face mask requirements in a bid to curb the spread of the virus. For months, officials around the world and in the United States promised that mass vaccination campaigns would bring an end to the months-long lockdowns and other COVID-19-related requirements. Now, with the rise of “Delta” infections among vaccinated individuals, it’s unclear what the next steps will be.

COVID-19 is the illness caused by the CCP (Chinese Communist Party) virus.

Lockdowns have been flagged as being ineffective in several recent studies. One conducted by the University of Southern California and the RAND Corporation found that shelter-in-place (SIP) orders didn’t actually save lives.

“We use an event study framework to quantify changes in the number of excess deaths after the implementation of a SIP policy. We find that following the implementation of SIP policies, excess mortality increases,” the researchers wrote in a working paper published by the National Bureau of Economic Research.

In the UK, researchers with several top universities said that about five times as many children died from suicide or related trauma than COVID-19. They specifically concluded that lockdowns are far more detrimental to children’s health than the virus itself.

According to anonymously sourced reports, Israel is considering a new lockdown due to the variant.

During his remarks on Saturday, Bennett said that “our goal is to allow routine life to continue with adjustments to the coronavirus,” although it’s not clear if that includes lockdowns.

“We all hope to see a slowdown, but the facts at the moment are that there isn’t a slowdown—not here and not around the world,” he added.

Another Israeli official said that lockdowns aren’t on the table.

“I don’t know how we’ve come to talk of lockdowns,” Sharon Alroy-Preis, Israel’s head of public health, told Channel 12. “We are not at a place of [considering] a lockdown during the holiday period [in September].”

In other parts of the world, lockdowns are being implemented again. On Sunday, Thailand’s government announced restrictions—including curfews—in Bangkok and other areas while suspending most domestic flights.

And in Australia, Sydney on Saturday ordered harsh new restrictions, shutting down construction on buildings, banning non-essential retail, and threatening to fine employers who don’t comply.