Ofcom chief executive Dame Melanie Dawes said: “Freedom of expression is something we guard fiercely in this country, and the bar for action on broadcasters is rightly set very high.

“Following an independent regulatory process, we have today found that RT is not fit and proper to hold a licence in the UK. As a result we have revoked RT’s UK broadcasting licence.”

We have revoked RT’s licence to broadcast in the UK with immediate effect.

We do not consider RT to be fit and proper to hold a UK licence and cannot be satisfied that it can be a responsible broadcaster.

RT, formerly Russia Today, is already off air in the UK due to the sanctions imposed on Russia following the country’s invasion of Ukraine.

Ofcom said it is conducting 29 investigations into “the due impartiality of RT’s news and current affairs coverage of Russia’s invasion of Ukraine.”

It said: “We consider the volume and potentially serious nature of the issues raised within such a short period to be of great concern—especially given RT’s compliance history, which has seen the channel fined £200,000 ($262,000) for previous due impartiality breaches.”

Ofcom said it noted new laws in Russia that “effectively criminalise any independent journalism that departs from the Russian state’s own news narrative,” particularly in relation to the war in Ukraine.

It added: “We consider that, given these constraints, it appears impossible for RT to comply with the due impartiality rules of our broadcasting code in the circumstances.

“We have concluded that we cannot be satisfied that RT can be a responsible broadcaster in the current circumstances. Ofcom is therefore revoking RT’s licence to broadcast with immediate effect.”

In a statement on Twitter, she said: “I welcome @Ofcom’s decision and it’s right that our independent regulator has taken action against RT.

“The outlet’s lies and propaganda, where victims are cast as the aggressors and the brutality of Russia’s actions are concealed, have absolutely no place on our screens.”

The main opposition Labour Party also welcomed the move, but said it “should have come sooner.” 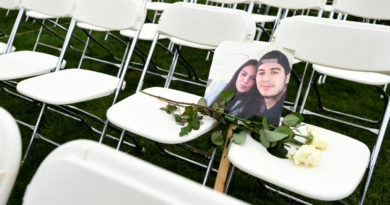 Mixed Emotions as Court Verdict for MH17 Handed Down

Ahead of Tech Earnings, Analyst Names Nvidia and These 4 Semiconductor Stocks as 2022 Top Picks