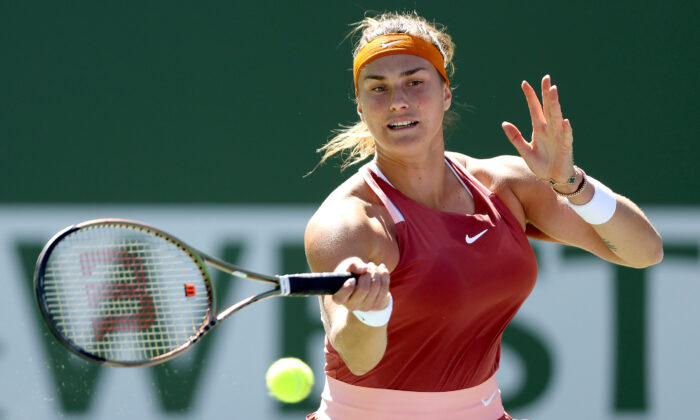 Aryna Sabalenka of Belarus returns a shot to Jasmine Paolini of Italy during the BNP Paribas Open at the Indian Wells Tennis Garden in Indian Wells, Calif., on March 12, 2022. (Matthew Stockman/Getty Images)

INDIAN WELLS, Calif.—World number three Aryna Sabalenka suffered a shock loss in her first match at Indian Wells on Saturday, falling to Italian Jasmine Paolini 2–6 6–3 6–3 in the second round.

The Belarusian committed eight double faults and converted just three of her nine break point opportunities on a hot day in the Southern California desert.

Paolini said she was as surprised as anyone to come out on the winning side of the match.

“I’m so happy. I didn’t expect this moment,” she said.

“I’m just happy to be here in the third round. I think I played an amazing match. The crowd was amazing. I enjoyed it very much.”

Sabalenka was a favourite to win the event after world number one Ash Barty and world number two Barbora Krejcikova withdrew ahead of the start of the WTA 1000 tournament.

Sabalenka follows Karolina Pliskova and Garbine Muguruza out of the tournament after both top 10 players lost on Friday.

Uvalde Parents Don’t Want to Send Kids Back to School