SEOUL, South Korea—Samsung Electronics has officially appointed third-generation heir Lee Jae-yong as executive chairman, two months after he secured a pardon of his conviction for bribing a former president in a corruption scandal that toppled a previous South Korean government.

Lee’s promotion is partially symbolic as he has headed the Samsung group in his capacity as the electronics company’s vice chairman since 2014, when his late father, former chairman Lee Kun-hee, suffered a heart attack. Lee’s legal troubles had been widely seen as a factor that prevented Samsung Electronics from quickly promoting him as chairman after the death of his father in 2020.

The 54-year-old is now navigating one of his toughest stretches as the leader of one of the world’s largest makers of computer memory chips and smartphones. The economic havoc unleashed by Russia’s war on Ukraine and rising interest rates imposed by central banks to counter surging prices have slowed consumer spending on technology devices and deflated chip shipments, cutting into the company’s profit.

Samsung and other semiconductor makers are also dealing with new U.S. restrictions on exports of advanced semiconductors and chipmaking equipment to China, part of efforts to prevent American technology from advancing China’s military capabilities.

Samsung’s announcement that Lee is its new chairman came shortly after the company reported a 31 percent drop in profit for the three months through September, its first year-to-year decline in quarterly profit in nearly three years.

In approving Lee’s promotion, Samsung’s board of directors cited the “current uncertain global business environment and the pressing need for stronger accountability and business stability” that would be provided by his leadership. During a meeting with Samsung’s top executives Tuesday, Lee said the company was at a “pivotal moment” that required swift and bold moves.

Samsung’s operating profit for the last quarter slipped to 10.85 trillion won ($7.7 billion) from 15.8 trillion won ($11 billion) a year earlier, its first annual decline in quarterly profit since the fourth quarter of 2019.

The company said geopolitical uncertainties are likely to dampen demand at least through the first half of 2023. It said demand could recover later next year, driven by a need for chips required for new data centers and computer products.

Samsung’s earnings report came a day after smaller chipmaking rival, SK Hynix, announced a 60 percent dropped in operating profit for the last quarter and said it would cut its investment next year by more than 50 percent, citing an “unprecedented deterioration” in market conditions.

Han Jin-man, executive vice president of Samsung’s memory business, said during a conference call that the company doesn’t have any plans for short-term production cuts and remains focused on the market’s longer-term recovery.

Chipmakers like Samsung and SK Hynix are also navigating an intensifying U.S.-China technology standoff that some experts say could force the companies to significantly modify or reduce their Chinese operations over the next few years.

SK Hynix said this month that the U.S. Department of Commerce granted the company a one-year exemption from new U.S. export controls restricting the transfer of advanced semiconductor technology and chipmaking tools to China, allowing it to maintain memory chip production at its Chinese facilities without disruption.

However, SK Hynix’s chief marketing officer, Kevin Noh, issued concern on Wednesday that the company might be forced to sell its manufacturing operations in China if the United States decides not to extend the company’s exemption and intensifies the crackdown on technology exports to China. While Samsung has not publicly confirmed whether it has received a similar exemption from the U.S. requirements, a Biden administration official told the Associated Press earlier this month that it did.

The official, who was not authorized to comment and spoke on the condition of anonymity, said Samsung has received a license for the equipment needed to maintain existing facilities in China but not to export chips that are prohibited. About 40 percent of Samsung’s NAND flash chips are reportedly produced from its factory in the Chinese city of Xi’an, accounting for around 10 percent of global capacity.

Lee had already been out of prison on parole for a year when President Yoon Suk Yeol pardoned him in August for the corruption conviction, an act of leniency that underscored the tech company’s huge influence in the nation.

Lee was convicted in 2017 of bribing former President Park Geun-hye and her close confidante to win government support for a merger between two Samsung affiliates that tightened Lee’s control over the corporate empire. Park and the confidante were also convicted in the scandal and enraged South Koreans staged massive protests for months demanding an end to the shady ties between business and politics. The demonstrations eventually led to Park’s ouster from office.

He still faces a separate trial on charges of stock price manipulation and auditing violations related to the 2015 merger. 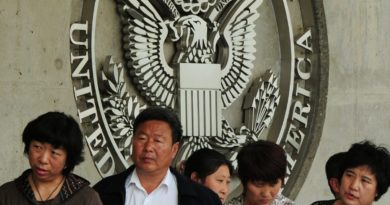