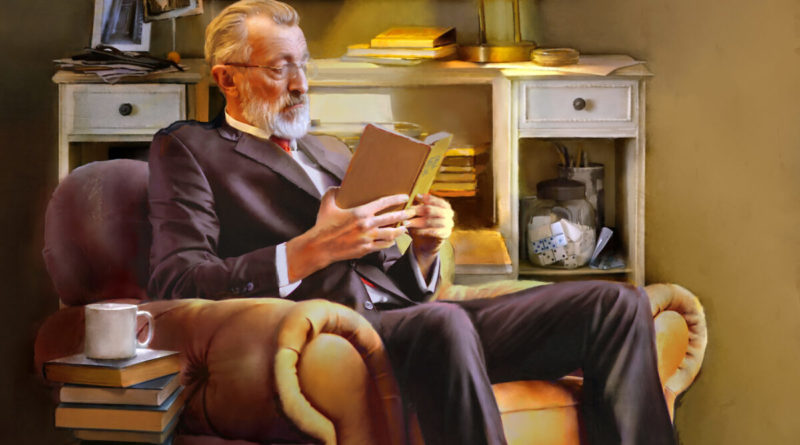 
A software sales rep I know treasures his hour-long commute from his home to his office in Northern Virginia. As he heads down I-66, joining the dense traffic after Manassas, he lights up a cigar, listens to the radio or a podcast, and relishes his time alone, suspended between the responsibilities of family and the workplace.

Several moms familiar to me rise early in the morning before the children are stirring. They pour themselves a coffee and then enjoy some tranquility before the day comes barreling down the pike. One woman uses this time for spiritual reading, a couple of them write out the day’s to-do list, and another practices prayer and meditation.

Long ago, when I lived in Boston, an acquaintance, a window washer, found his place of quiet and recuperation in the Harvard Gardens, a tavern located across the street from Massachusetts General Hospital. There, he shook off his day with a couple of Buds, flirted with the waitress, who was old enough to be his mother, and either visited with friends or enjoyed the evening in leisurely solitude.

Most of us seek such places and ways of escape, looking to them as a sort of recovery room where we can recharge our batteries or lick our wounds, depending on our needs. Whether it’s simply returning home after work, settling down before bedtime with a glass of chardonnay in the den, or taking a solitary stroll about the neighborhood, we look for places and circumstances that offer a refreshment of body and soul and relief from stress.

We may rarely use the name, but we’re seeking sanctuary.

A Concept With a Long History

This word derives from the Latin “sanctuarium.” Sanctus means “holy” or “sacred,” and the “arium” on the end indicates a receptacle, as in aquarium or emporium. Hence, for churchgoers, a sanctuary is a place containing both worshippers and the holy of holies—God. In the Middle Ages, fugitives from the law or from the powerful could race into a church and claim “sanctuary,” that is, protection in this inviolate space from their pursuers. The murder of Archbishop Thomas Becket, for example, became a sensation across Europe in part because his assassins slew him inside Canterbury Cathedral.

To this day, just as they have for centuries, various religious orders and denominations offer special chapels and accommodations for pilgrims seeking a place of retreat. In these sanctuaries, participants undergo a period of prayer and recollection, a practice that refers not so much to revisiting their memories but to “re-collecting” themselves, paying closer attention to the presence of God, and gluing together pieces of the self that are broken by the world.

Throughout history, many of the wealthy or famous have established secular getaway residences to serve as their places of quiet and recollection. Roman emperors frequently fled the heat and congestion of that city to spend time in a rural retreat. During the American Civil War, Abraham Lincoln and his family did the same, leaving behind the hectic pace of White House politics to live part of the year in a large cottage on the outskirts of the city. “We are truly delighted with the retreat,” wrote Mary Lincoln to a friend. “The drives and walks around here are wonderful.” Since the time of Franklin Roosevelt, other American presidents have found their peace and a change of pace at Camp David, Maryland.

What About the Rest of Us?

This quest for a space where we may relish solitude and safety seems innate in human beings. Whether a country estate or a cabin in the Smokies, the word home, for instance, glows with an almost mystical sheen. We think of it as a refuge, “the place,” as Robert Frost wrote, “where, when you have to go there, they have to take you in.” This desire for a home, a haven for comfort and safety, is hardwired into most of us.

Consider children at play. Quite often, the younger set delights in setting up palaces made of bedsheets beneath the dining room table or castles of quilts and chairs in the basement, all for the joy of creating their own space. Older kids enjoy treehouses and building forts in the woods, while teens turn their bedrooms into private abodes decorated with posters and mementoes and headquarters for their electronic devices.

This same craving for a sanctuary lives in most of us. The attorney who buys a timeshare at the coast plans to use it as her getaway residence. The guy who builds a man cave in the corner of his basement wants a space that’s all his own, with whatever accouterments—a bar, a La-Z-Boy, a shelf of favorite books—strike his fancy.

For others, a sanctuary can be even smaller and less involved, entailing nothing more than a sofa in the den, a table with a lamp and a stack of books and magazines, and a cup of hot tea. It isn’t the size or the ornamentation that matters so much. It’s the feeling of security and pleasure bestowed on us by that magical site.

Not all sanctuaries are good for us.

Recently, a West Virginia landlord told me that one of his tenants, a woman in her 50s living on government relief, wakes in the morning and spends several hours polishing off nearly a fifth of vodka. She then takes a long afternoon nap and repeats the process in the evenings. Her sanctuary lies in the bottom of a bottle, and it’s killing her drop by drop.

Likewise, the 15-year-old boy who spends every moment out of school playing games on a screen is poisoning his mind and his future. He might think of his screen time as his sanctuary, but it’s become an electronic jail with bars and walls as real as any prison.

The same holds true for the man sprawled on the sofa while watching hours of television evening after evening. That routine might act as a buffer against his worries and his work, but it provides none of the restorative powers of true sanctuary.

A good sanctuary brings us relief, rest, and renewal. The location matters far less than its powers to transform us. In my own case, I once lived for seven years in an apartment in Asheville where nearly every evening, when I entered and closed the door behind me, the thought would occur: “It’s good to be home.” My work duties as a teacher followed me inside—grading papers and tests, planning lessons—but inside that apartment, these tasks were manageable and in their proper place, a part of an evening’s routine.

If you already have a place you consider your haven and refuge, appreciate that sanctuary and your good fortune. If instead you find yourself a refugee, carrying your problems and troubles like weights without a place to put them down, consider making your own personal sanctuary, a place and a time where your priorities shift, where the outside world fades away, replaced by more intimate pleasures.

Like those fugitives of old, we enter that special place and cry, “Sanctuary!”

Jeff Minick lives and writes in Front Royal, Virginia. He is the author of two novels, “Amanda Bell” and “Dust on Their Wings,” and two works of nonfiction, “Learning as I Go” and “Movies Make the Man.”

How Much Has Been Spent?