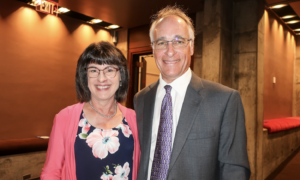 In the audience was Sharon Roloff, a medical assistant, and Dr. Rob Roloff, a minister in the Lutheran Church, both of whom were immediately struck by the very colourful performance. Dr. Roloff expressed his admiration for the gymnastics prowess of the dancers and the meaningful storylines.

Shen Yun portrays China’s history and culture through story-based classical and ethnic dances. Based in New York, the company’s mission is to revive 5,000 years of Chinese civilisation from the pre-communist era.

While the company presents well-known and cherished legends and tales from China, it also portrays the modern-day persecution of the spiritual practice Falun Dafa, an ancient belief whose values are based on universal values from the Buddhist and Taoist traditions.

Dr. Roloff commented after watching the mini-drama “Insanity During the End of Days,” a story about a father who is a surgeon in a Chinese hospital that carries out forced live organ harvesting for profit.

“That [Falun Dafa is being persecuted] in China concerns me because I see the same sort of thing happening here in America to Christians. I think I see shadows of that coming to America. I see it growing … that intolerance of a religion that isn’t sanctioned by the government,” Dr. Roloff said.

However, he said he had always loved Chinese culture.

Mrs. Roloff agreed with the tenets of Falun Dafa, a belief centered on the values of truthfulness, compassion, and tolerance, and wanted to support them. “I think we can all relate to this story,” she said.

The “striving for excellence” was also a quality that was expressed by the performers, she said.

Dr. Roloff noted that those values were expressed through the color, dancing, choreography and costuming in Shen Yun.

“I really appreciate how they’re integrating the background and it conveys [that] life is a beautiful thing. Life can be a very colorful, beautiful thing,” he said.

Also watching Shen Yun that evening were Paul and Michelle Moore. Mr. Moore is an order writer for Meyer Produce and Mrs. Moore is a molecular biologist.

Shen Yun was beautiful, Mrs. Moore said. She loved the storytelling and also remarked how the dance “Insanity During the End of Days” touched her emotionally.

“Very sad, very sad, and based in reality,” she noted. “Very potent and the fact that … [the Chinese people] can’t watch their own dances in China is very sad.”

While Shen Yun can be seen in most parts of the world, it has been banned from touring in China by the ruling community party.

“I was a dancer myself, and just the way that they use their costumes as part of the dance, it’s just amazing,” she said. “The costumes are as much a part of the [performance] as their movements.”

Mrs. Moore was formerly a Polish ethnic dancer and was interested in the similarities and differences between the dance styles. She also commented that she had never seen a backdrop play such a large part in a performance.

The company’s backdrop technology, which involves traditional stagecraft and 3D projection, creates a magical impression with actors mysteriously disappearing off and reappearing on the stage.

Mr. Moore said he enjoyed the dance that portrayed the legend of the Monkey King. This tale comes from the Chinese classic novel, “Journey to the West,” which follows the trials and tribulations of a Buddhist monk who during the Tang dynasty journeyed to India to obtain the Buddhist religious texts or sutras.

“[It is] the story of how he fed his people and it was very inspiring,” he said.

Shen Yun portrays messages about divinity, as the ancient Chinese believed that heavenly beings and mortals once co-existed in harmony and that the purpose of mankind is to return to the Creator.

“I am a spiritual person, and I believe that we need more of [Shen Yun],” Mr. Moore said.