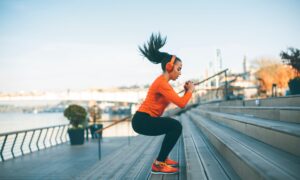 Want to keep your brain sharp as you age? Exercising for as little as 10 minutes a few times per week can help stop mental decline in its tracks.

We already know that engaging in regular exercise is one of the healthiest habits you can adopt, regardless of your age or current physical condition. Studies have shown that moderately intense aerobic exercise, like taking a brisk walk, is safe for most people and can strengthen bones and muscles, reduce your risks for disease and even improve brain health,[i] forestalling the cognitive decline associated with aging.

A study published in the journal Alzheimer’s Research and Therapy suggests that exercising more than once per week for at least 10 minutes can significantly reduce the risk of developing Alzheimer’s disease in individuals already suffering from mild cognitive impairment (MCI).[ii]

MCI may be diagnosed when a person experiences greater-than-average memory loss or confusion but has not begun experiencing the personality changes or more severe memory loss associated with Alzheimer’s disease (AD).[iii] MCI is considered one of the leading risk factors for developing Alzheimer’s.[iv]

Can Exercise Keep Your Brain Young?

Researchers from Yonsei University College of Medicine, Republic of Korea, investigated the association between continual exercise and the risk of developing dementia in patients with MCI. The study analyzed data gathered between 2009 and 2015 for nearly 1 million MCI patients via a national health insurance database.

Individuals under the age of 40 were excluded from the study, as were those who were diagnosed with dementia or who had not received a medical examination within two years of their MCI diagnosis. Written informed consent was obtained for each patient included in the study and physical activity data was obtained via self-report questionnaires. The final cohort of 247,149 patients was divided into four groups based on their frequency of physical activity (PA):

There are currently no approved treatments for MCI that effectively alter the path of disease-progression, making physical activity one of the most important interventional strategies for the prevention of Alzheimer’s-type dementia.[v] Prior studies have shown that high-intensity physical activity has a more protective effect against dementia than low-intensity exercise, and that duration and frequency of PA are important factors affecting the risk of cognitive decline.[vi] Accordingly, the Never-PA group was set as the benchmark for the risk of developing AD.

Of the 247,149 patients analyzed, 23,015 patients converted to dementia over the six-year study period, with 77 percent of this group (17,733) diagnosed with Alzheimer’s-type dementia. Compared to the never-PA group, the risk of dementia was reduced in both groups that engaged in physical activity (initiation-PA group and maintenance-PA group). Of all groups, the maintenance-PA group (consistently performed physical activity) showed the lowest risk of dementia, with 18 percent fewer dementia conversions than the never-PA group.

The frequency of physical activity was another important takeaway from this study. After adjusting for age, gender and vascular risk factors, the risk of developing dementia was 15 percent lower for those who engaged in regular physical activity compared to irregular PA.

Ceasing exercise proved to be as deleterious as never exercising, with the risk of developing dementia being the same for the never-PA group and the withdrawal-PA group. However, initiating an exercise regimen after MCI diagnosis provided an 11 percent lower risk for developing Alzheimer’s disease compared to not exercising at all.

According to the study authors, regular exercise may increase blood flow to the brain, increasing survival of neurons and preventing brain shrinkage associated with dementia.

Researchers at Stanford University also found that one exercise session leads to changes in a remarkable 9,815 molecules in your blood. That means the biochemical effects of exercise could be profound and wide-ranging.

Due to the low risk and high potential for benefit, regular exercise should be recommended to patients with mild cognitive impairment, even if they did not exercise prior to their diagnosis. Even short bursts of moderate physical activity conducted a few times per week could significantly lower their risks of developing Alzheimer’s disease.[vii]

According to the National Institute on Aging, Alzheimer’s disease is currently ranked as the sixth leading cause of death in the United States, however, due to underreporting, it may be the third highest cause of death for the elderly.[viii] With no known cure, conventional medicine is at a loss for reversing this blight on human health.

Studies on exercise have produced significant evidence that this all-natural intervention may be so effective it could cut your risk of developing AD in half. Published in the Journal of Alzheimer’s Disease,[ix] researchers from four major institutions followed 876 adults over a 30-year span, keeping detailed records of the amount and type of exercise that was engaged by each participant. Mental health exams were conducted along with MRI brain scans to determine the amount of gray matter in the brain, as well as mental cognition.

For more information about the therapeutic benefits of exercise, consult GreenMedInfo.com, the world’s most widely referenced, evidence-based natural medical resource.

The GMI Research Group is dedicated to investigating the most important health and environmental issues of the day. Special emphasis will be placed on environmental health. Our focused and deep research will explore the many ways in which the present condition of the human body directly reflects the true state of the ambient environment. This work is reproduced and distributed with the permission of GreenMedInfo LLC. Sign up for the newsletter at GreenmedInfo.health

Breathe Yourself to Better Balance