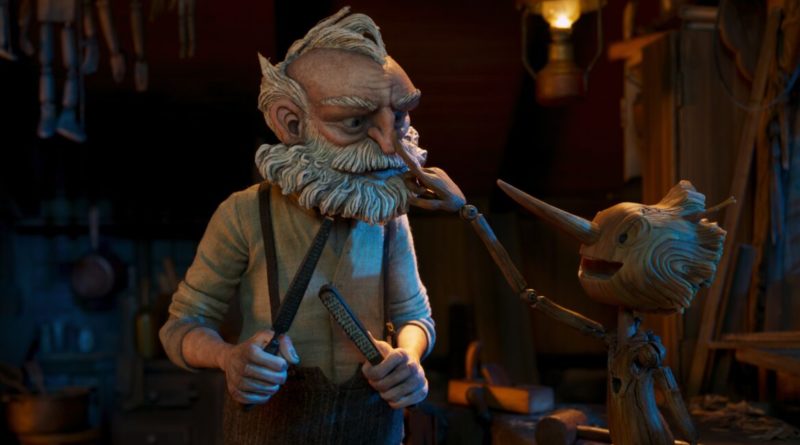 
“The Adventures of Pinocchio” by Carlo Collodi and “Peter Pan; or, the Boy Who Wouldn’t Grow Up,” among others, are “evergreen” fables for boys that circle back around in movie form at least once per generation. They carry big archetypal themes about the hero’s journey, boyhood, and coming of age.

But the iterations are accelerating due to the American showbiz juggernaut’s need to churn out more and more product, due to the expansion of viewing formats, and due to an insatiable, easily bored worldwide viewership.

To wit: Robert Zemeckis just offered up a rather flaccid, live-action remake of “Pinocchio” for Disney+ that basically cloned the original, famous Disney 1940 animation. Then there’s also the recent “Pinocchio: A True Story,” a Russian animation version voiced by “SNL” alum Pauly Shore and Jon Heder of “Napoleon Dynamite.” In this review, we’ve got Guillermo del Toro’s version.

This latest version by “The Shape of Water” Oscar-winner Guillermo del Toro is more artistically ambitious than Zemeckis: He aligns Collodi’s dark vision with his own often somewhat dark perspectives.

Del Toro is one of modern cinema’s notable visual stylists. He revamps Collodi’s 1883 fable of puckish puppet Pinocchio and his adopted father, Geppetto, as a stop-motion animation tale situated in fascist Italy between the wars, which includes an amusing cameo appearance by a pint-sized, dim-witted-to-the-point-of-being-“special,” gargantuan-jawed Benito Mussolini.

The broad strokes of the tale are familiar: Grieving widower and woodcarver Geppetto (voiced by David Bradley) carves a puppet (voiced by Gregory Mann) from the pine tree under which his slain son, Carlo (voiced by Alfie Tempest), is buried.

The puppet comes to life when the strange blue Wood Sprite (Tilda Swinton), who looks like a slightly demonic del Toro interpretation of a cherubim with a two-toned voice suspiciously like the dark, mighty version of Galadriel in “The Lord of the Rings,” breathes life into it.

Pinocchio, as Geppetto names the puppet, has many adventures in which he learns lessons about life and death, obedience, and truth-telling. His goal, of course, is to become a “real boy.”

No movie version to date has been completely faithful to Collodi, and del Toro’s is no exception. In fact, his omissions, additions, and tweaks are probably more pronounced than most. However, it’s safe to say that overall, it’s a darker version than previous takes on the tale, and that should come as no surprise since this is del Toro we’re talking about.

The del Toro darkness gives it, in part, a pervasive sense of loss. There’s a sweet prologue in which Geppetto and his 10-year-old son Carlo enjoy small-town Italian village life together, until the boy is blown to smithereens by a randomly jettisoned World War I bomb detonating on the parish church where he and Geppetto are working to install a giant, carved crucifix for the altar.

Along with the church, Geppetto’s heart explodes in grief. And after burying Carlo beside the perfectly shaped pine cone he’d once instructed Carlo to find, he lingers by the gravesite, like Arwen grieving for Aragorn in “The Lord Of The Rings,” until the pine cone has grown into a tree.

It’s here that the story’s narrator, a cricket, pops up. It’s not Disney’s Jiminy, but one Sebastian J. Cricket (voiced by Ewan McGregor). This is not just any cricket, he would have us know, but a world-traveling author of some renown (having been in the waistcoat pockets and sat on the windowsills of numerous famous people), who takes up residence in a well-appointed crevice situated in Carlo’s pine tree to write his autobiography.

When Geppetto chops down the tree to manufacture himself a replacement son, Sebastian is still holed up in his pine-tree writer’s retreat cabin when they arrive back at Geppetto’s wood shop. Sebastian’s cabin turns out to be right where Pinocchio’s heart would be (a nice touch), if, like the Tin Woodman, only he had a heart. The crickets in these stories always represent Pinocchio’s conscience.

Geppetto leaves the puppet in an unrasped, unsanded, unvarnished, and unpainted state. Very primal and wood-spritely, it’s a knotty, gnarly, gangling sentient stick figure who terrifies the congregation when Geppetto brings him to church.

As every child knows, Pinocchio’s nose grows whenever he lies, and the nose growth of del Toro’s Pinocchio includes branches, twigs, and even leaves, depending on the egregiousness of the untruth.

Pinocchio is ordered to attend school but cuts class and soon falls in with sleazebag carnival barker Count Volpe (voiced by Christoph Waltz) and his simian minion Spazzatura (voiced by Cate Blanchett), who force Pinocchio into starring in their puppet act by threatening Geppetto with some legal “abracadabra.” Count Volpe is a very similarly foppish, affected, limp-wristed, twirling, and grand-gesturing drama queen to Ben Kingsley’s carnival barker in “The Boxtrolls.”

When Pinocchio rebels by insulting Prime Minister Mussolini (Tom Kenny) with a scatological parody of a patriotic song during a command performance—he’s immediately shot dead.

Except Pinocchio can’t really die. He’s sent to the afterlife where he meets the Black Rabbits, who manage death logistics (like stacking coffins and such) and who play cards on their breaks.

Pinocchio then meets Death (Tilda Swinton), a sphinx-like figure in the underworld, and sister to the Wood Sprite. She informs Pinocchio of his immortality, explaining how he will return to the mortal realm once an hourglass has finished flowing, and cautioning that time spent in the afterlife will always increase each time he returns.

Will Count Volpe have a much-deserved comeuppance? Will Pinocchio reunite with Geppetto and Sebastian, who have been swallowed up by a giant Dogfish? Suffice it to say, he might have to die a few more times before things work out. And even if they do, as Death tells Pinocchio, he might (again like Arwen of “The Lord of the Rings”) outlive all of his loved ones. And should that come to pass, it might be the case that Pinocchio decides to travel off to parts unknown for new adventures.

As mentioned, McGregor’s cricket is the heart of the movie as the conscience. And pretty funny. Christoph Waltz’s manipulative Count Volpe is a character you love to hate, and Cate Blanchett’s nonverbal hench-monkey is lots of fun.

The lighting and Italian exteriors are transportive; Tilda Swinton’s Wood Sprite and Death are mildly unsettling, and Geppetto and his twiggy-brown title-character son are fairly adorable.

It’s well crafted and eye-catching for sure. But who’s it really for? Matteo Garrone’s fantasy version of “Pinocchio” (2019) was wildly imaginative yet faithful, and it appealed to all ages. Del Toro’s broody musical captures an achingly innocent elemental boy creature, veering from utter purity to primal wants and ambitions, to middle school mischievousness and disobedience. He repeatedly get slammed into the underworld but reincarnates, like a twanging rubber band, right back into a time of mankind’s darkest history.

While it covers historical events that will make sense only to adults, it’s solidly a children’s movie. Maybe slightly too dark for tiny ones; then again, I’m extremely conservative about what very small children should be exposed to. I’m continually shocked and appalled at the cinematic fare parents drag their children to nowadays.

And then, some of the good messages are offset by curious reversals of tradition, such as showing that sometimes disobedience can be a positive virtue, and that sometimes lying can be a good thing. Excuse me? Hello? Isn’t that almost overwhelmingly the main theme of “Pinocchio,” ever since it came into existence? What child doesn’t know that if you lie your nose will grow? This is the essence of this story, and to undercut it in this way and muddy the waters is sacrilege as far as I’m concerned.

I was also disappointed by the elimination of the original Pinocchio theme of growing donkey ears when moving to the big city, which indicated that a downslide from human to animalistic hedonism was an incipient danger.

Ultimately, though, the injunction to be oneself rings true, as do the multiple acts of self-sacrifice. All in all, this iteration, arriving as it does in a veritable Pinocchio flood, is a pretty decent little piece of entertainment.

Mark Jackson is the senior film critic for The Epoch Times. Mark has 20 years’ experience as a professional New York actor, classical theater training, and a BA in philosophy. He recently narrated the Epoch Times audiobook “How the Specter of Communism is Ruling Our World,” and has a Rotten Tomatoes author page.

UK to Resettle up to 20,000 Afghans Under New Scheme