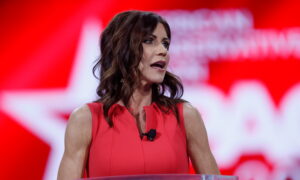 A South Dakota bill that would have banned biological males from participating in female sports died on Monday after it was rejected by South Dakota Gov. Kristi Noem.

Noem, a Republican, insisted she did not veto the legislation, but the end result appeared to be the same in a standoff with state legislative leaders.

Noem on March 19 sent the bill back to the state House, asking for style and form changes. If legislators made the changes, she said, she’d sign it. Among the proposed changes was removing college athletics from the sports teams that would be affected, under pressure from the NCAA.

The House on March 29 overwhelmingly rejected all the proposed changes, in a 67-2 vote. House Speaker Spencer Gosch, a Republican, had pushed colleagues over the weekend to reject the proposed alterations.

Noem then sent a letter to the House, asserting that the state Constitution prevented her from signing the bill because the final version didn’t confirm with her recommendations.

“Therefore, my only option consistent with the constitution is [to] fail to certify the bill and to return it to you,” she wrote. The bill should be treated as if it was vetoed, she said.

Terry Schilling, president of the American Principles nonprofit, said in a statement the proposed alterations would have “fundamentally subverted the entire bill,” adding that Noem was “the only Republican governor to date to refuse to sign legislation protecting girls’ sport when given the opportunity.”

A spokesman for the governor told The Epoch Times via email: “It is an incorrect reading of the South Dakota Constitution to suggest that the Governor had a second opportunity to sign the bill.”

Governors in Arkansas, Tennessee, and other states have signed bills protecting single-gender sports that are similar to the South Dakota bill.

Noem said in a separate letter obtained by The Epoch Times that those bills were different than the one the state legislature delivered her.

She pointed to two executive orders she recently signed, one of which addresses potential transgender players in K-12 athletics and the other that deals with the issue in college sports.

South Dakota’s Senate adjourned on Monday evening without overriding Noem’s veto. March 29 is the last legislative day of the session, which means the bill is dead until the next session.

South Dakota is one of some 23 states where the GOP controls the governor’s mansion and both state chambers.

Noem’s attempt to change the legislation has pitted her against conservative heavyweights, including Fox News’s Tucker Carlson. Noem is generally popular among Republicans and is thought of as a serious potential 2024 contender.

Colombian COVID-19 Variant Spreading in the US: Health Experts