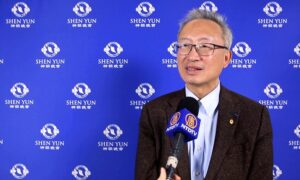 PARIS—Wu Chih-chung, the diplomatic representative of Taiwan in France, said after attending Shen Yun Performing Arts, “I wish Shen Yun will continue to perform and to bring the truth, beauty, and kindness of Chinese culture to the world.”

Shen Yun’s mission is to revive traditional Chinese culture, which has been nearly destroyed in mainland China due to decades-long campaigns by the communist regime.

As a person of Chinese heritage, Wu said, “Chinese culture is a very important civilization. With the development of our world, Chinese people are also taking on a more important role in the world.”

“Unfortunately, China is ruled by the communist party, whose destruction to the world’s culture has been obvious to us all.”

He added, “From Russia’s invasion of Ukraine, we can see that the Chinese Communist Party has found itself in an awkward place: On the one hand, it wants to support Russia; on the other hand, it knows the world will not tolerate such behavior.”

Wu acknowledged the kindness and beauty of Chinese culture. “We can see that part from Shen Yun,” Wu said. “I think this is a very important part of the culture.”

Wu thinks that despite the turmoil that is always present in the world, a message of kindness is also always there to counteract it—and Shen Yun is showing that now.

“The world has been relying on a group of people, who have great ambitions to let the kindness of humanity known. I believe Shen Yun has this mission now,” Wu said. “Let’s work hard together on this important mission.”

“I am not an artist, but I can feel the difference between Chinese dance and Western dance. [Shen Yun] brings out the beauty of a culture, and introduces traditional Chinese legends to the world. It is a good combination of arts and history,” he said.

Wu added that “beautiful things are always recognized all around the world, so they have universal values. Therefore, we can see that during Shen Yun, audience members, including the French and people from other countries, all applauded enthusiastically. Shen Yun presents beauty very well. I think this is most important.”

“We can see that more and more people are supporting Shen Yun,” he said.