Irena Stein, founder of Alma Cocina Latina, has turned her restaurant into a cultural ambassador for her native country, and a landing pad for fellow immigrants in search of a better life

The most important ingredient Irena Stein has brought to Baltimore’s dining scene isn’t found in her Venezuelan food. It’s her team.

As the proud founder of the country’s first contemporary Venezuelan restaurant, Alma Cocina Latina, and a Venezuelan immigrant herself, Stein is supporting the next generation of Venezuelan chefs in America—which begins with helping them immigrate and secure legal paths to citizenship. Her efforts include sponsoring five chefs for O-1 visas, granted only to individuals with exceptional talent.

“They come here for a better life and for opportunities they can’t get at home because of the situation and violence,” Stein said. “It’s so important for me to build a link between the country I am living in and the country that I’m from. That is what Alma is.”

Stein’s nonlinear path to opening Alma began in 1980, when she emigrated from Caracas on a Fulbright scholarship to earn her master’s in cultural anthropology at Stanford University. After graduating, she endured a period without official status before securing a diplomatic passport to work at the Venezuelan Consulate. She then worked in anthropological sciences and the creative arts, and moved to Baltimore in the late ’90s.

When the 2001 recession hit the art world, “I was encouraged to go into the culinary arts, and was lucky enough to earn a contract with NASA to open a café at their Hubble telescope facility at Johns Hopkins University,” Stein said. Her café was so successful that she opened a second on campus.

For 15 years, Stein wowed diners with her from-scratch Venezuelan food—particularly her arepas, which always sold out.

“Selling so many arepas gave me the idea to thank Baltimore for its warm welcome,” she said. She opened Alma in 2015, minutes away from campus, to serve the community that supported her.

Stein still remembers her difficult path to legal residency, which continued even after she was married to an American citizen and had a child.

“I’m extremely sensitive to the difficulties of immigration,” Stein said. “It’s important that I support as many people as I can.”

Among the chefs she has sponsored is David Zamudio, who worked on a six-star cruise ship and under Michelin-starred chefs before coming to Alma. He started as sous chef; now, at 28, he’s the executive chef and co-owner.

Stein’s mentorship goes beyond the immigration process. In some cases, she housed the chefs when they first arrived, and she works to help them understand their new city and connect with locals.

“My main goal is to introduce them to the community, so they have a better sense of belonging,” Stein said.

She believes that Alma is more than a restaurant. It’s a place where Baltimore’s community can come together to understand and support each other—and get to know the beauty of the Venezuelan people, culture, and food.

“Food is an extraordinary vehicle for peace, dialogue, and understanding,” she said. “The world is upside-down right now, so helping each other is the only way to make the planet better.”

Nick Dauk is an Orlando-based writer whose work has been featured in BBC News, Insider, Fox Business, and The Telegraph. He’s an avid traveler and can be found seeking out the world’s best street eats when he’s not curled up on the couch with his wife and son.

COVID-19 Vaccine Passports Will Be Imposed on England This Month: Minister 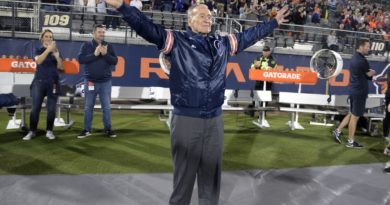