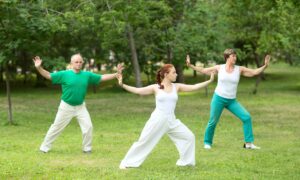 As a mother of two small children who have almost unlimited energy, I regularly use the phrase “take a deep breath” with them when emotions run high. Last week, I received a note from my 5-year-old’s teacher explaining that my daughter had comforted one of her classmates who was upset, by sitting with her and helping her to take some deep breaths, just like she does at home.

As human beings, we seem to instinctively know that breath is much more than simply filling and emptying our lungs. And for a good reason, as throughout history, ancient traditions have used the power of the breath for everything from maintaining health to cultivating wisdom.

Jack Feldman, professor of neurobiology at the University of California–Los Angeles, and world expert in the science of respiration, breaks down the mechanics of breathing. He explains that when we inhale, we take oxygen into the lungs, which is needed and used for the body’s metabolic processes. We then produce carbon dioxide, which must be eliminated for the body to function optimally. Feldman says that carbon dioxide (CO2) affects the acid–base (pH) levels in the blood. The body must regulate pH levels because all living cells are very sensitive to this balance.

CO2 is a metabolic byproduct of aerobic cellular metabolism. When CO2 levels build up in the blood, it can lead to hypercapnia, causing symptoms of respiratory failure, coma, and even death. Oxygen is needed by the entire body, especially the brain. The brain can only survive without oxygen for about four minutes without sustaining permanent damage, and death can occur as soon as four to six minutes later.

Essentially, our bodies need a constant supply of oxygen and a way to continuously eliminate carbon dioxide. Breathing—inhaling and exhaling through the lungs—accomplishes this perfectly in a healthy person. It’s a beautiful system, and although science knows a lot, according to Feldman, there’s still much about respiration that we don’t understand.

The Benefits of Deep Breathing

With the growing popularity of practices such as yoga and meditation in recent decades, science has been looking more closely at the physiological and psychological benefits of different breathing techniques. A growing body of evidence indicates that breathing techniques can improve various health concerns, from anxiety to insomnia.

A study published in the journal Neurological Sciences in 2017 set out to see if deep breathing exercises could improve mood and lower stress in a group of university students. Participants were split into two groups: One did an anti-stress protocol for 90 minutes once a week for 10 weeks, and the control group spent the same amount of time each week without practicing any protocol.

The study showed a significant improvement in stress symptoms between the beginning and the end of the study. The use of the protocols reduced “tension anxiety” (anxiety that manifests psychologically and physically) and fatigue. Overall, the study concluded that a deep breathing technique could elicit an improvement to both psychological and physical stress, as well as to mood and perceived stress. These improvements weren’t observed in the control group.

A breakthrough study published in the journal Proceedings of the National Academy of Sciences, published in 2014, discovered something that science thought wasn’t possible.

The study found that, through practicing techniques learned in a short-term training program that included breathing techniques, meditation, and exposure to cold, participants were able to voluntarily influence their sympathetic nervous system as well as their immune systems. The volunteers practicing the techniques showed profound increases in the release of epinephrine, which led to increased production of anti-inflammatory agents. The participants were then given E. coli (a bacteria) intravenously, and although they did experience some flu-like symptoms, they were less pronounced and of shorter duration than those in the control group. These results demonstrate that by activating the sympathetic nervous system, the participants were able to decrease their immune response.

Another study published in the Journal of Psychosomatic Medicine in May this year had the same results when looking into whether breathing exercises and exposure to cold could affect the body’s inflammatory response. The study measured inflammation by giving the volunteers endotoxins (bacteria) intravenously, then measuring their blood epinephrine levels.

The results showed that the breathing exercises practiced by the participants significantly decreased the body’s inflammatory response. When cold exposure was added to the breathing technique, the decrease in inflammation was even more pronounced.

The study concluded that once trained in both breathing and exposure to cold training techniques, participants could voluntarily activate the sympathetic nervous system (responsible for our “fight or flight” response to perceived danger), decreasing the inflammatory response and alleviating symptoms of endotoxemia. Endotoxins are present inside bacterial cells and are released when they die. This release makes them capable of getting into the bloodstream, where they can make us sick.

The autonomic nervous system and the innate immune system (our first line of defense) have long been viewed as systems that operate automatically and can’t be deliberately influenced. The above studies demonstrate that by practicing certain techniques, the sympathetic nervous system and the immune system can be affected intentionally. These findings have broad implications for the treatment of certain conditions, especially autoimmune diseases in which the body’s immune system attacks healthy cells, and are characterized by excessive and often uncontrolled inflammation.

Ancient Insights on Breathing for Health

Using the breath to heal illnesses, boost health, and aid in spiritual pursuits isn’t new and goes back millennia to cultures the world over. Below are only two examples of the many traditions with well-developed systems that have harnessed the power of the breath.

Pranayama, or yogic breathing, is a vital component of yoga, a 3,000-year-old spiritual and ascetic discipline. Yoga combines physical postures, or “asanas,” with breathing techniques, or pranayama. The word “prana” comes from Sanskrit and roughly translates to the “breath of life” or “vital energy,” much like the “qi” of Chinese medicine. “Ayama” can be translated as expansion, regulation, or control. Pranayama is a way to alter your breathing to achieve health and well-being.

In Chinese medicine, breathing techniques have been used to maintain health, heal illness, and cultivate the body’s energy (qi), and as a spiritual aid for thousands of years. Deep, slow breathing from the diaphragm is an ancient practice in Chinese medicine and Eastern religions such as Buddhism and Taoism.

The ancient Taoists practiced embryonic breathing, or tai hsi, which they believed was able to “reactivate” the electromagnetic circuitry associated with the type of primordial breathing that babies experience in their mother’s womb.

In Eastern medicine, the breath is vital to a healthy body and mind. The breath is one way we bring vital energy, or qi, into the body. Qi has no exact equivalent in Western culture but is often loosely translated as “life force” or “vital energy.” You can think of it as the animating energy of life. An inaccurate but perhaps helpful description is to think of it as the deeper force behind the electrical charges constantly moving through the body and chemical energies that our body creates from food and breath.

In the Eastern view, qi is necessary for all living things and is the energy needed to power our movements, thoughts, and all our biological processes. Qi also needs to keep moving freely for us to stay healthy. If it slows down or gets blocked or “stuck,” it can cause problems and lead to disease.

One way to describe this vital concept is to use the analogy of blood flow, or circulation. The circulatory system is an extensive network that carries blood, oxygen, and nutrients throughout the body, nourishing organs and tissues. If the flow of blood is reduced, the body would experience symptoms of poor circulation such as tingling, numbness, and pain because it isn’t getting the nutrients it needs to function properly. The brain would get less oxygen, and thinking and cognition would be impaired. A blockage in the blood flow would be catastrophic, as is seen with strokes.

In a similar way, qi circulates throughout the body and is vital to all physical and many mental processes. Qi must keep moving for us to remain healthy. In Chinese medical theory, when qi gets stuck, it can lead to disease; therefore, we want to keep qi moving. Chinese medicine has many ways we can keep our qi flowing freely, such as moving our bodies (tai chi and qi gong) and many breathing exercises.

One of the simplest and most potent is the deep breathing exercise below. Breathing deep into the abdomen allows our tissues, organs, and cells to get more oxygen. It shifts the autonomic nervous system into parasympathetic nervous system dominance, characterized by rest, relaxation, decreased breathing and heart rate, and increased digestion (sometimes called the “rest and digest” state). When the parasympathetic system is active, we have an open, trusting attitude toward others and the world, and we feel calm and at peace.

In a study in the journal Focus from 2019, participants improved their physical and mental well-being by using tai chi and qi gong. In these practices, breathing is a vital component. The study also showed that both tai chi and qi gong had beneficial effects on psychological well-being. They reduced symptoms of anxiety and depression by enhancing nonreactivity to aversive thoughts and impulses.

A study published in the International Journal of Yoga in 2020 demonstrated that decreased, slow, regular breathing (from 14 breaths per minute to 10 breaths per minute) reduced blood pressure, lengthened pulse transit time, and increased cardiorespiratory coherence. These results indicate a shift toward parasympathetic dominance and positive emotional states.

There are many helpful breathing techniques that can enhance performance and improve health. I have chosen two here to give you an example of something you can try on your own.

One thing to keep in mind with breathing techniques is that many of us have been breathing into our upper chests—a very shallow type of breathing—for a long time. A good way to begin is to visualize your breathing occurring much lower, in your abdomen. This proper breathing will initially feel strange, but if you persist and take it slowly, you will eventually “train” your body back to a more natural type of breathing.

Children do this deep, diaphragmatic breathing instinctively, but we tend to drift away from it with all the stresses of our modern, hectic lifestyles. The result is that this shallow breathing offers our organs and tissues (especially our brains) much less oxygen than we could be getting if we were breathing more deeply. Deep breathing also helps us to remain equanimous and better deal with the stresses of life.

This technique works best when practiced lying down when you first begin to learn it. Once you have become more comfortable with it, you can practice it sitting up. The goal is to start breathing into your abdomen, aided by placing a hand there, focusing on the rising and falling of your stomach as you breathe. The hand on the chest should stay still, helping to eliminate shallow, upper chest breathing.

If you’re anxious or stressed, increase the count to 20 or 30 repetitions.

Remember, if you aren’t used to this deeper, diaphragmatic breathing, it will feel strange and may be difficult at first. With practice and patience, it will get easier, and you will reap the health benefits of breathing more deeply.

This simple exercise can help when you’re feeling overwhelmed, having a hard time falling asleep, or just needing to take a break.

A deep breath is how we enter the world; an exhale is how we leave it. It seems no wonder, then, that the breath, the punctuation points that begin and end a life, could be more influential than we’d previously thought and may hold secrets we have yet to discover.