Now that Russia’s conquest of Ukraine has begun, will communist China’s invasion of Taiwan be next?

It’s not clear how Beijing will “unify” China, but it is already normalizing the idea by openly mentioning a Taiwan invasion in the media.

Does this signal an invasion?

It may, and sooner than later.

And while it’s no secret that the Chinese Communist Party (CCP) feels threatened by virtually everything, the existence of a free and prosperous Taiwan just offshore is a continuous threat to the Party’s claim to legitimacy and indispensability for China’s growth and development.

Russia Doesn’t Expect Much Pushback From NATO or US

The bigger question is why does Russia now think it can invade Ukraine without any real pushback from the United States or NATO?

That question also applies to China. Why does Beijing think it can essentially advertise a potential invasion of Taiwan without consequences from the United States?

The broad answer to both questions is that the U.S.-dominated global order is rapidly fading. This decline in American power is not a question of capabilities. The United States still retains the preponderance of military and economic hegemony around the world.

It is, however, a question of political will and intentions. Let’s look at both situations for a moment, beginning with Russia’s move into Ukraine.

Why is Russia invading Ukraine now?

And just as important, why has the United States pushed so hard to expand NATO’s influence to Ukraine?

For one, the prospect of Ukraine being linked to NATO in any manner is unacceptable to Russia. That’s understandable. Russian President Vladimir Putin has no interest or benefit in having a historically anti-Russian military organization on his border. Such a development would certainly undermine Russia’s security posture as well as Putin’s support base in the Russian armed forces.

“For us it’s absolutely mandatory to ensure Ukraine never, ever becomes a member of NATO,” said Russian Deputy Foreign Minister Sergei Ryabkov. That includes Putin’s demand that no “strike weapons near Russia’s borders” are deployed in Eastern and Central Europe, even as far west as the Baltic states.

Essentially, Russia’s goal regarding NATO is for it to return to its pre-1997 membership and denuclearization of Europe.

Finally, allowing NATO to expand up to Russia’s border–and that includes supplying defensive weapons to Ukraine–undercuts the Russian leader’s stated goal of reconstituting the Soviet Empire.

The timing is likely related to a perceived weakness in U.S. President Joe Biden and division in Europe as it is to the weather.

Ukraine: A ‘Bridge Too Far’ for NATO

As for the actions of the United States and NATO, what’s the advantage of expanding further eastward?

Ukraine is “a bridge too far” and not of great strategic value to the United States or even Western Europe. It would be politically and militarily disastrous for NATO to come to Ukraine’s defense. By overextending NATO’s reach, it would add responsibilities that neither it—nor the United States under its current leadership—is able or willing to meet.

What’s more, once the United States explicitly stated that neither it nor NATO would respond militarily but only economically, the calculus in the region fundamentally changed. Moscow understood that military aggression would not be met with military pushback by the West.

As a result, the credibility and unity of NATO and the United States is damaged with Russia’s invasion of Ukraine. The U.S. military exists to defend the country and its interest. NATO exists to defend its European members against Russian aggression.

It’s a lose-lose for NATO and the United States. Worse, with deep divisions among NATO members—especially Germany—regarding the correct response to Russia, Putin is closer to realizing his goal of splitting the Western alliance.

These are a few of the reasons why Russia is invading. Not excusing it, but offering a rationale from Moscow’s perspective.

Taiwan: A Bookend to Ukraine?

As for China’s intentions for Taiwan, it appears to be a bookend to Russia’s Ukraine strategy. Both Beijing and Moscow have broad and deep mutual geopolitical interests with regard to the United States. Both seek to eliminate American hegemony in Europe and in the Asia-Pacific region.

Just as Russia is actively trying to divide the United States and Europe with the Ukraine invasion, China seeks to eliminate the U.S.-Asia-Pacific security alliances.

That effort may begin with eliminating Taiwan’s military and technological and political connections with the United States. It may well continue with the goal of destroying the American security arrangements, resulting in the end of American presence in the region.

Not surprisingly, China and Russia are in close coordination in supporting each other’s geopolitical interests in Europe and Asia. For example, Russia has just agreed to sell China 100 million tons of coal. Meanwhile, China gave Russia diplomatic cover by refusing to blame Moscow for the Ukraine events, or even calling it an invasion.

What’s more, both nations are actively trying to de-dollarize the global economy. Destroying American credibility in Europe and the Asian-Pacific region would make that much more likely to occur.

Will China move on Taiwan in the coming days or weeks?

It may depend on how the United States responds to Russia in the coming days.

Or, it may not. As of this writing, Chinese war planes are once again penetrating Taiwan’s defensive airspace. It may be that Ukraine will serve as an example to Taiwan and they extend a hand of accommodation to Beijing.

Whatever happens, it is becoming apparent that the U.S.-led global order is over.

James R. Gorrie is the author of “The China Crisis” (Wiley, 2013) and writes on his blog, TheBananaRepublican.com. He is based in Southern California. 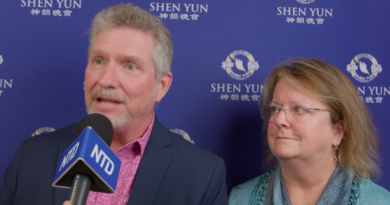 ‘We Need This in the World,’ Says Actor After Watching Shen Yun