America’s first great landscape painter, Thomas Cole, was a pivotal figure in the development of a distinctly American artistic identity in the early 19th century. Cole’s masterful landscapes range from picturesque compositions of America’s pristine wilderness to imaginative historical and allegorical scenes. The revered artist’s devotion to seeking the presence of God in nature inspired him to create depictions of divinity within the world and the human experience.

A prime example of this undertaking, and one of Cole’s most renowned series, “The Voyage of Life,” is a group of four paintings that illustrate the major stages in a man’s life: “Childhood,” “Youth,” “Manhood,” and “Old Age.”

The series was commissioned by wealthy banker Samuel Ward for his private residence. Ward, a religious man, hired Cole to portray the faith-based view of a man’s allegorical path through life ending in salvation. Ward died shortly after the commission commenced, but Cole continued work on the series with the new intention of showing them to the public. In his later years, Cole was an increasingly religious man, to which this series is a testament. Regardless of your faith, “The Voyage of Life” captures a journey through different seasons, challenges, and the varying mental, emotional, and physical states we experience as we ride the river of life. 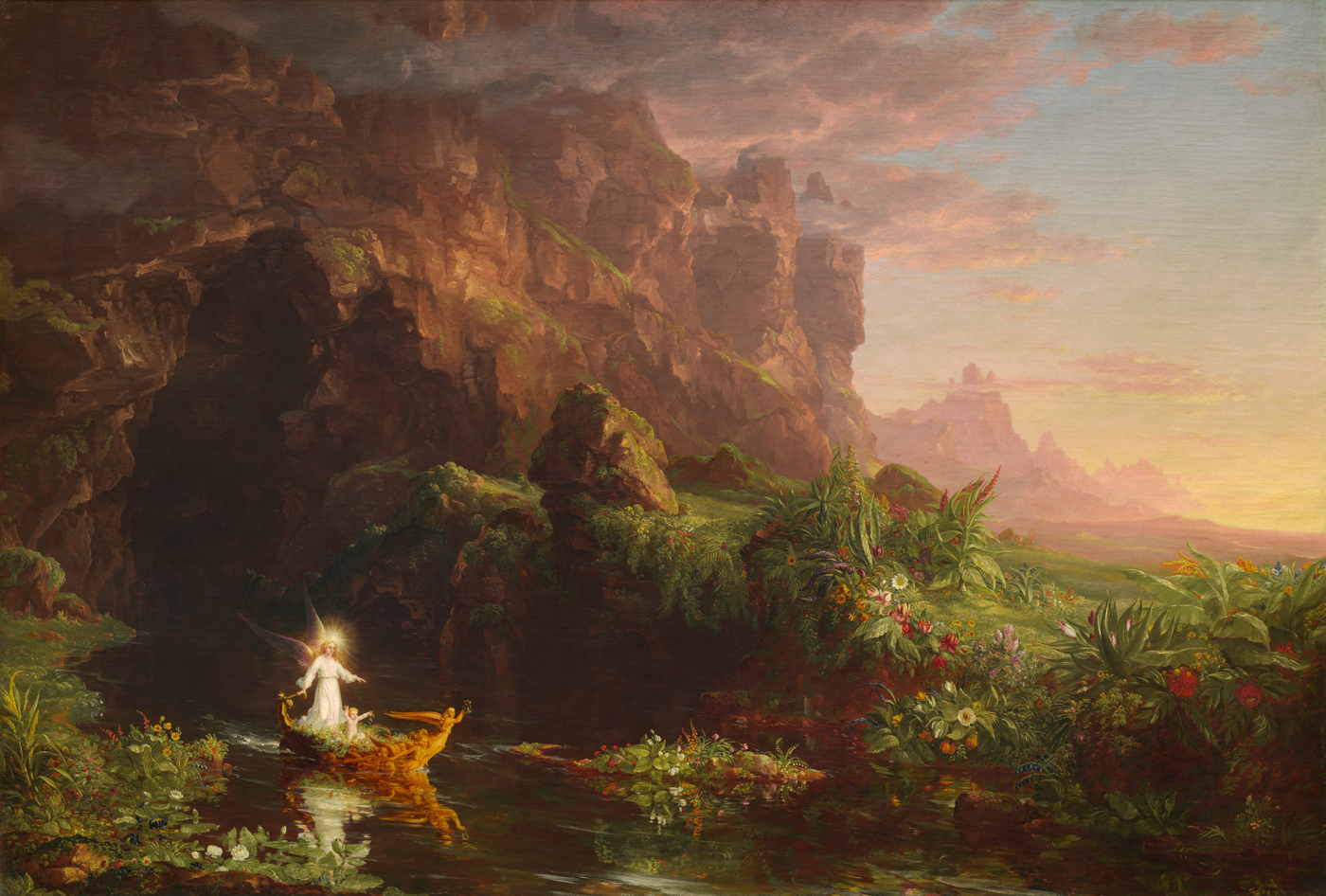 Cole originally worked on “The Voyage of Life: Childhood” when he was in his late 30s in 1839–40. This first landscape of the series symbolizes man’s birth into the world. A baby whom Cole called “the Voyager” is the passenger on a boat being guided down a river by an angelic figure. The front of the boat has an hourglass that is held by one of many angelic carvings whom Cole called “the Hours.” A shadowy cavern at the base of a massive rocky mountain, whose precipice is lost in clouds, gives the viewer the sense that the child has been delivered into this world of time from a mystery beyond it. The rosy light of sunrise casts an inviting glow on a vast and verdant landscape. Lush foliage and vibrant flowers greet the child on the banks of the calmly flowing river.

The child holds his arms outstretched joyously clenching flowers as he sits on a lush green bed of foliage that fills the boat. His guiding angel looks down lovingly while navigating the child into this colorful and wondrous new world. The painting symbolizes the optimism and mystery of childhood. Everything is fresh and filled with amazement. It is the dawn of existence for Cole’s voyager that is symbolized by the glow of morning light and the abundant natural flourishing of spring.

“The romantic beauty of youthful imaginings, when the mind elevates the Mean and Common into the Magnificent, before experience teaches what is the Real.” – Thomas Cole 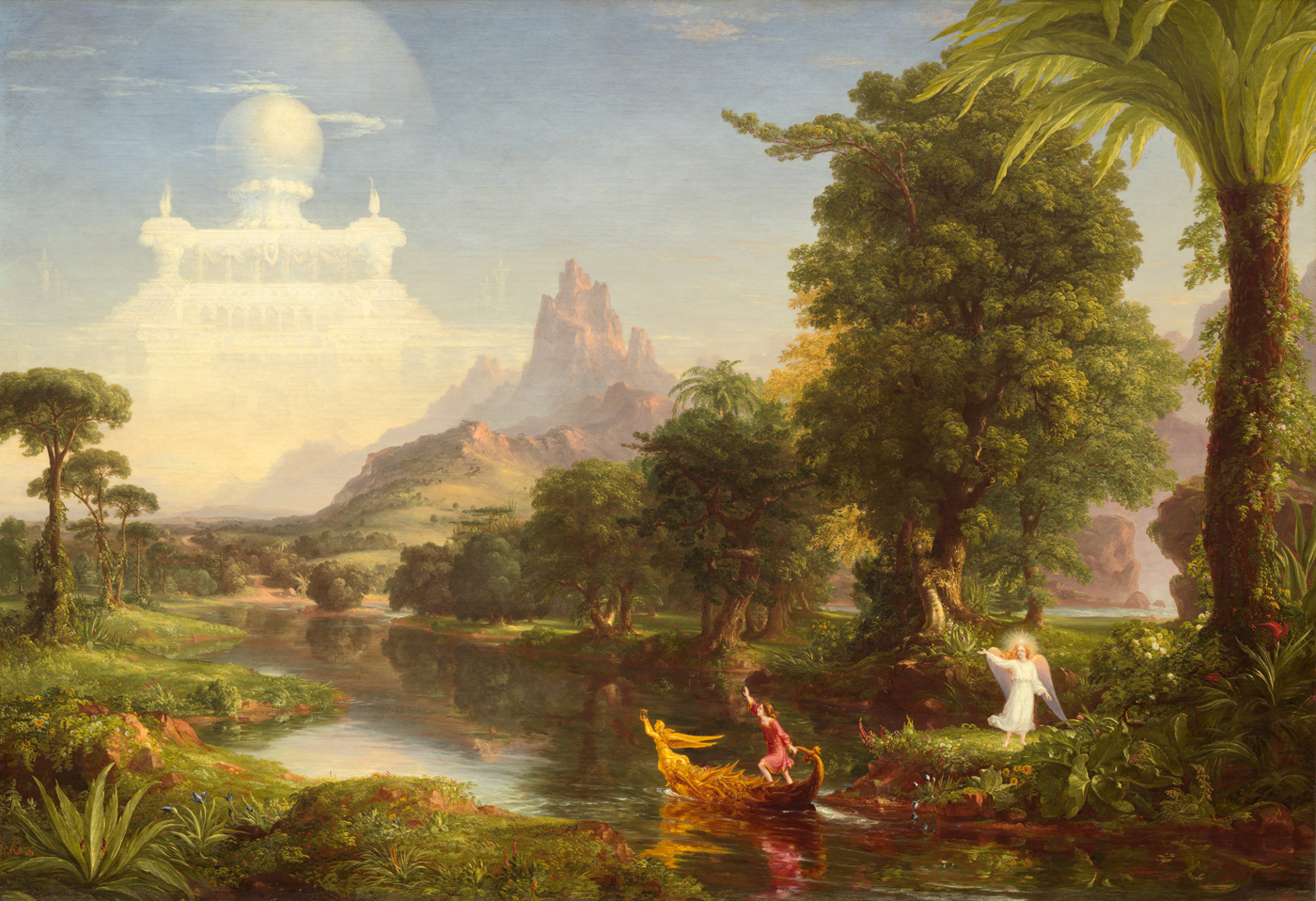 Cole completed “The Voyage of Life: Youth” along with the rest of the series in 1840. In this second painting, the landscape has opened up to reveal the course of the river through lofty trees and distant hills that elevate into soaring mountains. The voyager has now confidently taken the helm of the boat and looks longingly forward, pointing toward a glowing palace of clouds in the sky. For Cole, this symbolized “the daydreams of youth, its aspirations after glory and fame.” The young man seems to rush toward his lofty goals unconscious that he seems to have left his angelic guide behind him on the shore.

The landscape of “Youth” is enticingly gorgeous and teeming with life. The many flowers of childhood have been replaced with the ambition of mighty trees. A spirit of adventure and lust for the glories of life are pervasive in the painting. The boy charts a course for the palace in his mind without noticing that the river makes a sharp turn in the distance. It flows toward the right side of the painting where rocky cliffs await the voyager foreshadowing the third painting in the series. The naiveté and optimism of youth are going to be challenged by the realities of manhood. Cole seems to imply that wisdom and humility are the result of tempering the beautiful, yet inexperienced, visions of youth. 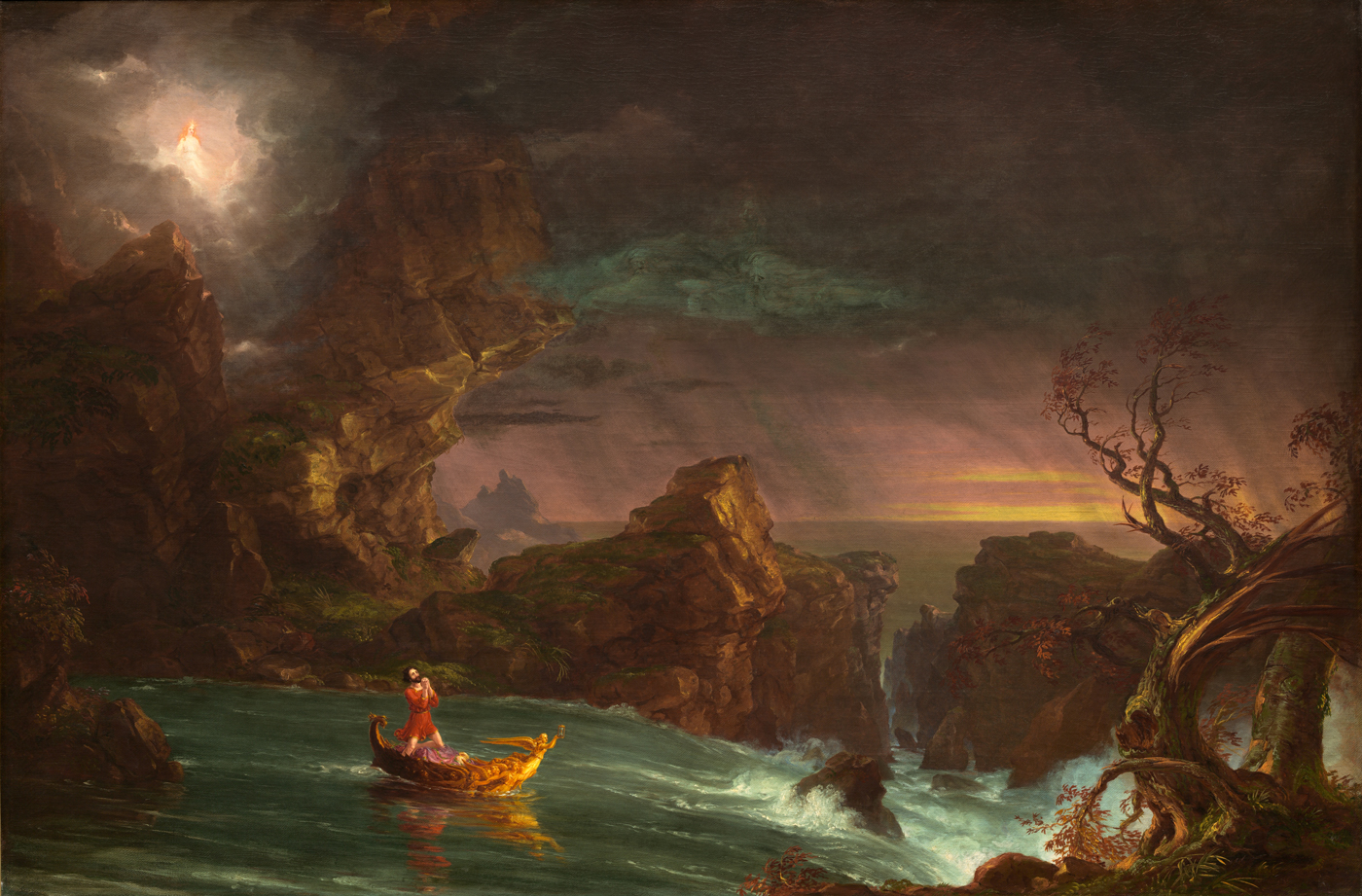 “The Voyage of Life: Manhood” is a very dramatic shift in tone and content from “Youth.” The now middle-aged voyager finds himself in a dark and dreary landscape rushing down a treacherous part of the river. Rocks jut out of rapids that are mere seconds ahead of him. Looking forlorn, the helm of the boat is gone and his hands are clasped together in desperate prayer. The angels on the boat look concerned as time in the hourglass seems to be running out. Cole, who himself had bouts of melancholy, seems to be outlining his sobering and blunt view of middle age. In his words, “Trouble is characteristic of the period of manhood.” Above the voyager in the clouds are ghostly apparitions. The man seems haunted by “demons’ and the place to which he has been delivered by the ignorance of his youth.

The viewer is left with a feeling of uncertainty as to what will happen to the voyager. Out of the bewildered man’s sight, behind him in the clouds, light shines down into the unpleasant scene from where the angel continues to watch over him. This offers the insight that life’s difficulties may not be as serious or lasting as they may seem during the experience. Adulthood is a challenging part of the voyager’s journey that he is navigating with his faith. Even when all seems lost, it is not, and a higher power is watching over him. The flowers and superficial beauty of youth are behind him but what lies ahead is a more meaningful truth.

“The upward and imploring look of the voyager shows his dependence on a Superior Power; and that faith saves him from the destruction that seems inevitable.” – Thomas Cole 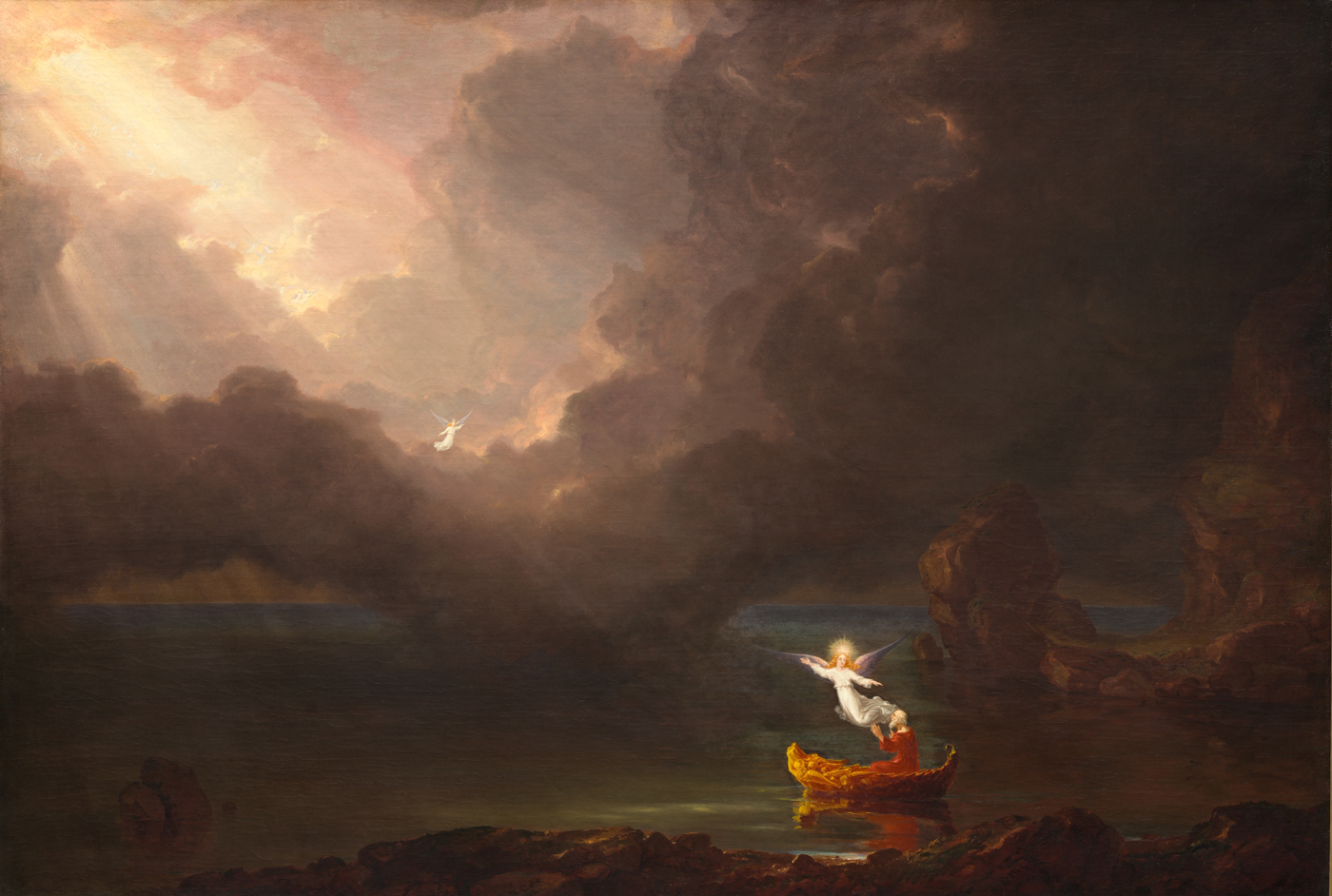 In “The Voyage of Life: Old Age,” the river has reached the mouth of a calm ocean symbolizing the end of the voyager’s experience in this world. The boat’s hourglass has broken off and there isn’t much left in the landscape. The angel appears before him now, pointing his gaze toward the heavens, which appear to be opening up to him in a gesture of invitation beyond this world.

“The chains of corporeal existence are falling away; and already the mind has glimpses of Immortal Life,” described Cole. It is here that the Christian doctrine of salvation in the afterlife is most prominent allegorically. The voyager had his time on the wildly changing river of life and now looks in hopeful wonder toward the faith-based promise to which Cole and his patron subscribed.

“The Voyage of Life” was well received by the public and critics alike. The poet William Cullen Bryant remarked that “the conception of the series is a perfect poem … set before us are the different stages of human life under images which every beholder admits the beauty and deep significance.” The paintings form a powerful allegory for human life and the hope of salvation in the mystery beyond it. Cole was hugely influential in establishing America’s artistic reputation and his works went on to inspire many other American artists. His attempt to instill the divine into his landscapes played an important part in forming the beauty, soul, and allure of America.

In 1842, after the initial success of the series, Cole made the impressive and somewhat shocking decision to laboriously paint all four paintings a second time in order to be able to further display them publicly. The first series was privately owned by Ward’s family and thus no longer under his control. For this reason, two slightly different yet essentially similar sets of “The Voyage of Life” exist at two different American galleries. The first set (1839–40) is at the Munson-Williams-Proctor Arts Institute in Utica, New York, and the second set (1842 and pictured in this article) is at the National Gallery of Art in Washington, D.C.

Jeff Perkin is a graphic artist and an Integrative Nutrition Health Coach available at WholySelf.com.